Unionized hotel workers from four downtown Vancouver hotels are currently engaged in labor action, picketing in front of the hotels and in the course of that not showing up for work. 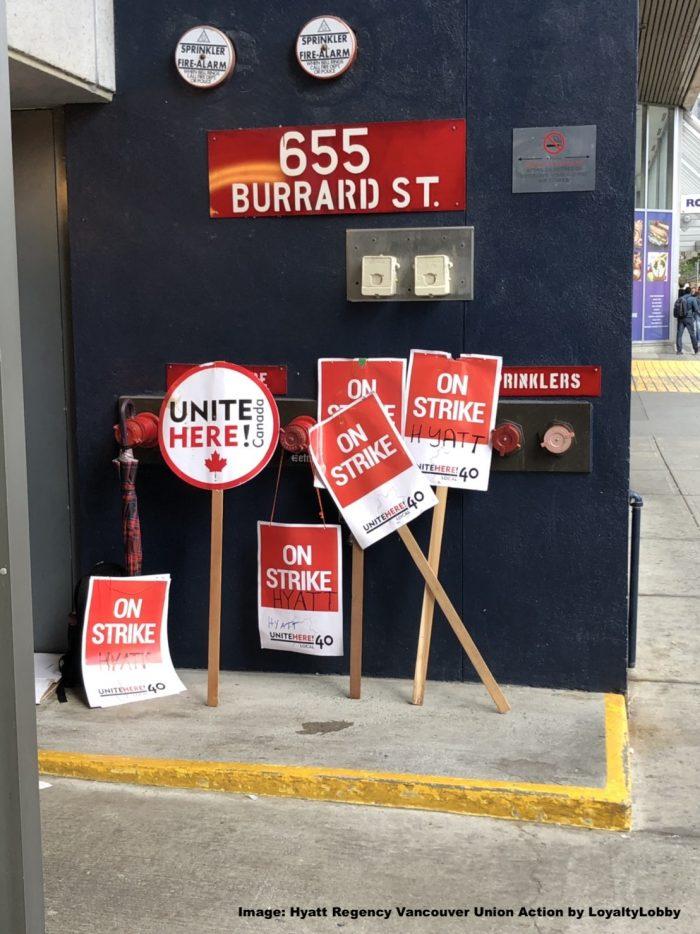 This is already causing major disruptions at the four properties including the Hyatt Regency Vancouver where employees walked out last week following staff cuts and over a year without contracts.

Labor action by unions in the hospitality sector is nothing new and in fact it’s quite common whenever there are issue at a property that can range from low pay to excessive workload or a whole range ob issues related to the positions the unionized employees are filling.

Vancouver media has reported for a couple weeks now that employees are in negotiations with the hotels, some of which (such as the Hyatt) that have been sold to a private equity group just a few years ago.

Since the middle of September employees are especially causing problems in the operations of the Hyatt Regency Vancouver on Burrard Street as The Star already reported two weeks ago.

Workers from the Hyatt Regency, Hotel Georgia, Westin Bayshore and Pinnacle Harbourfront hotels participated in the lunch-hour strike, fighting for more stable working hours and safer working conditions, according to Unite Here Local 40, the hospitality workers’ union that represents them. Most of the workers have been without a contract for 14 months.

“The most important issue for me is workload,” said Naden Abenes, a room attendant who has worked at the Hyatt for 11 years.

Abenes said the hotel had reduced the hours of positions like hotel houseman who help room attendants do heavy lifting, such as moving beds and taking dirty linens away. Those tasks now fall on room attendants, which Abenes says has resulted in her pulling the intercostal muscles in her chest area.

“Everyday the hotel pushes us harder, and I injured myself three times already … along with my co-workers, too,” she added.

Abenes, who was hired as a full-time employee, says she’s witnessed her work hours being reduced to as little as two days a week during the winter season, down from her regular five days a week.

The Hyatt Regency was sold in 2014 to equity group InnVest which owns several hotels all over Canada at a purchase price at US$123 million. It was previously owned by Hyatt itself.

Apparently the new owners have since tried to squeeze the property in order to get a good bang for the buck, Over the years I’ve gotten to know quite a few employees there even outside their job and the stories have always been in line to what’s reported in the article above. The main complaints are reduction of hours to the point of where it was required to find a second job.

Last week I was able to snap some pictures at the Hyatt: 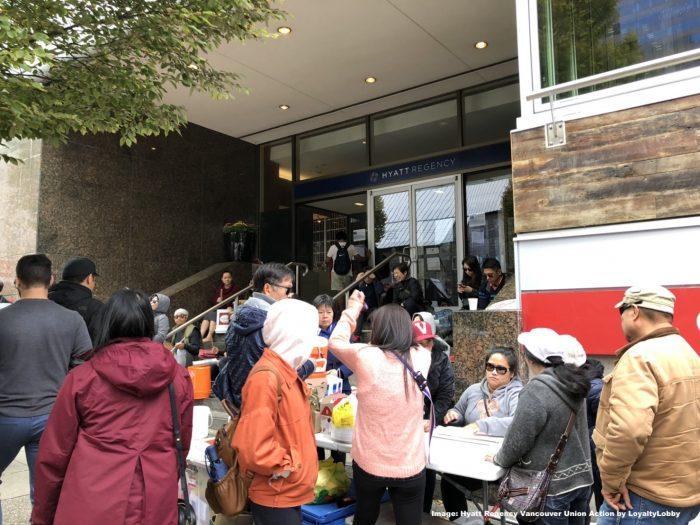 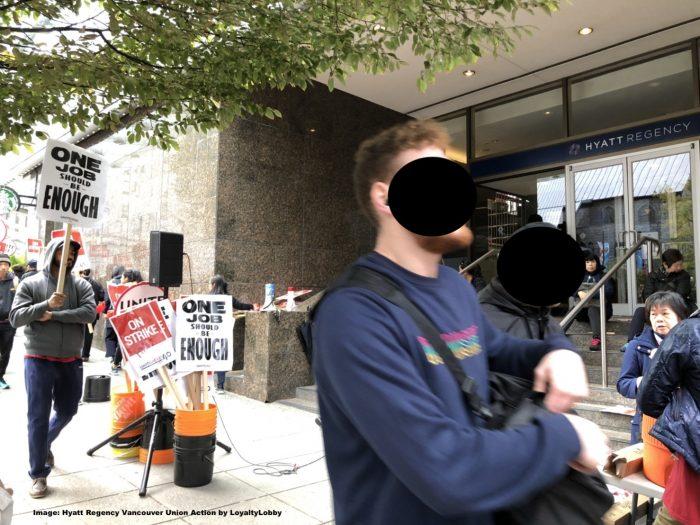 Interestingly enough I have another four nights booked before going on a cruise mid October and on the weekend received the email below:

We look forward to welcoming you to Hyatt Regency Vancouver for your upcoming stay.

Ahead of your visit, we wanted to make you aware of a potential labor union situation you may experience during your stay from demonstrations and / or work stoppage by Vancouver’s local UNITE HERE labor union.

Due to the work stoppage, we have modified a number of our operations to maintain a consistent level of service offered.

Housekeeping: Guest rooms will not be serviced daily. A variety of amenities, towels, and bottles of water will be available in the lobby. Please inquire with lobby staff to obtain additional items. If you are in need of towel or trash service, please contact the hotel operator prior to 12 noon and an associate will attend to your room prior to 5pm.

Mosaic Grille:  Open daily for breakfast, we will be offering a $15 breakfast buffet inclusive of a selection of hot and continental items as well as a coffee and juice station.

Mosaic Bar:  Hours of operation will be 5:00pm – 9:00pm, serving a small selection of chef’s choice appetizers as well as alcoholic and non-alcoholic beverages for purchase.

Hotel Access: We recommend you carry your hotel key card with you at all times during your stay.

As with a number of hotels in Vancouver, the Hyatt Regency Vancouver is in negotiations with UNITE HERE, and we are optimistic about reaching a fair contract in the best interests of the hotel and our colleagues as quickly as possible.

We are available if you have any concerns about these events and we encourage you to let us know if there’s anything we can do to make your experience at our hotel better.

As always, thank you for choosing to stay with us and please reach out with any questions.

I inquired with the hotel what about the benefits for Hyatt Globalist members and those guests who have booked Club Rooms which isn’t mentioned even in the slightest in this communication.

I was told the Club will be closed as staff will be required to assist at the Front Desk which is probably a sensible choice.

Nevertheless customers are of course entitled to a compensation of sorts. Anyone who has booked a Club Room is in the very least entitled to a monetary compensation. It’s a bit more difficult for Globalist Members and possibly up to individual negotiation. In the past Hyatt has credited 2500 points to customers when a club is closed for whatever reason plus daily breakfast at the restaurant.

The other properties mentioned might face the same difficulties if a resolution isn’t found. This affects a wide variety of staff from kitchen, housekeeping and even guest services.

I’m putting the blame for this entirely on the owners (InnVest) for letting it come this far. Vancouver is one of these destinations where you see the same employees for years and decades. When Hyatt decided to sell the property they also sold any and all proper treatment of the staff.

Realistically hotel owners are in a fix here. The workers will always be unionized and even firing everybody and hiring new staff won’t change that (apart from it being legally impossible or at least very costly). Examples from Los Angeles and Hawaii we recently covered showed at some point the owners have to make concessions as desired by the unions. Guests won’t support this nonsense forever and eventually stay elsewhere.

Cuban Tourist Card (Getting One In Lima) 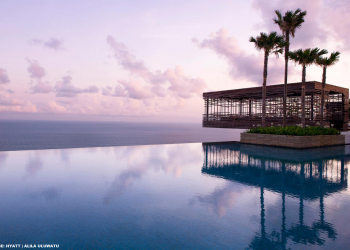 Hyatt has launched a new bonus opportunity for stays at participating hotels in the Asia Pacific between May 16 –... 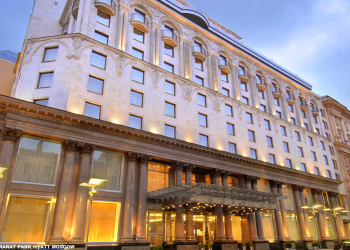 Hyatt has previously communicated that it would end certain activities in Russia and ended its affiliation with Hyatt Regency Moscow...