A LoyaltyLobby reader sent us a question about British Airways flight cancellation ex-Oslo and refusal to rebook on SAS.

Remember that you can always email us, send a message via Facebook, or use Twitter and include photos too. We’ll try to cover Reader Questions & Comments here several times a week.

I wonder if I can have your advice with your experience of British Airways cancelling flights and rebooking to new ones? It’s a long one, but hopefully you can help.

I have a round trip booked LHR-OSL with BA with further flights with Qatar routing OSL-DOH-SIN and back. I noticed on my ‘Manage My Booking’ page on the BA app that I now have three flight sectors instead of the two that I had originally booked:

BA’s app does not make it clear that any of my flights had been cancelled, and still states ‘scheduled’. Although there is a ‘rebooking/refund’ button visible. I did not receive an email of any flight change to accept/reject – definitely something I would have paid attention to if I did! BA claim that an email was sent – but obviously I haven’t accepted this change, seeing as I haven’t seen it.

I messaged BA via Twitter DMs to understand why I had three flight sectors on my booking.

To begin with, they didn’t even acknowledge my question and clarify why I had three flight sectors on my booking. After being prompted, they then stated that my flight was no longer being operated and so I was rebooked onto their second flight of the day operating OSL-LHR at 11:25. They originally had an afternoon and an evening flight on this date at the time I booked, so it was not just my flight being cancelled here.

The agent said that other than this flight, they could offer a routing OSL-HEL-LHR with partner Finnair but this departed OSL at 08:50. Again, this is unsuitable.

My understanding from guidance from The CAA is that airlines should rebook customer onto the next available flight of similar routing. They have also recently commented on BA refusing to rebook customers on suitable flights during the recent strike action – a quick google search brings up news stories on this.

The BA agents on Twitter have been refusing to consider rebooking me onto alternative airlines (Norwegian or SAS offering similar routes at suitable times) because they have no affiliation with them. And they say because they have notified me of this change more than 14 days in advance, they don’t have to book me onto an alternative carrier (don’t think this is entirely correct as the 14 day notification reference is for the ability to claim compensation).

I have been sticking to my guns going back to them each time saying that the offers of rebooking me are not suitable for my travel plans, and as per EU delay/cancellation rules they should rebook me on an alternative carrier, regardless of affiliation with BA.

They have offered to refund me for the flight sector so that I can book with SAS or Norwegian but there will be a difference in price that I will need to make up which I don’t think is fair.

Have you had any success from cancelled BA flights being rebooked to another carrier?

Am I within my rights to insist on this, and how can I persuade BA to do this for me?

Here are flights between OSL-LHR for November 3, 2019: 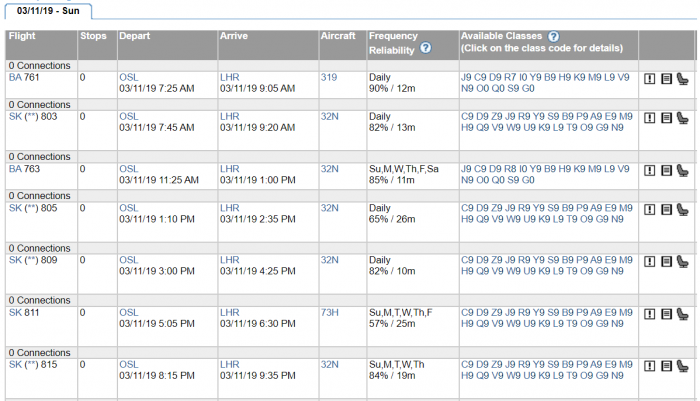 There are also flights operated by Norwegian and Ryanair but not to Heathrow.

The EC 261/2004 compensation doesn’t apply if the flight is canceled more than 14 days in advance, and the airline has informed you about the change.

They are required, however, to rebook affected passenger to their destination at the earliest convenience (yours not the airlines). This includes moving to passengers to airlines that could be competitors.

While it would be convenient for BA to keep passengers on their metal or, in this instance, rebook on Finnair, another Oneworld airline, there is absolutely nothing that would prevent rebooking on SAS. Norwegian could be problematic as BA doesn’t have an agreement with them.

Here’s what I would do:

1. Make the booking on a later SAS flight

2. Send compensation request for the alternate flight to BA

if they refuse then:

A) Open a case with CAA

B) Open a claim via MCOL

I was actually in Oslo last night, and the flight that the reader has a problem with was operating. I guess that BA is reducing frequencies for the quieter times in late fall.

British Airways here is trying not to follow the EC 261/2004 legislation, especially when they were recently reminded of the requirement of rebookings on other airlines by the UK Enforcement Body (CAA).

Unfortunately, I don’t believe that it is possible to convince BA to follow the legislation unless the reader follows up with the CAA, MCOL, or CEDR. They must have done the numbers and found out that it is cheaper for them this way, as many passengers still are not aware of their rights, and very few will follow up.

Let’s hope that the reader can get this issue resolved with BA.