Good news for members of Alaska Airlines Mileage Plan as the program has now introduced the option to redeem miles for Singapore Airlines flight awards through their website.

The first partnership between Alaska Airlines and Singapore Airlines was announced back in 2017 but as far as mileage cooperation went it never got much traction – until now.

As a downside though the awards are a bit on the high side compared to partners such as Japan Airlines or Cathay Pacific which makes it in some cases hard to justify booking Singapore Airlines over them.

You can access Alaska Airlines award charts for all the partners here.

Here is an example for San Francisco to Singapore and the results emulated on the Alaska website for Singapore Airlines:

What is interesting here is the availability for Singapore Airlines First Class for intra-Asia flights, in this case HKG-SIN as displayed above.

If you try to book this standalone that option is also available:

Here are the published Singapore Airlines award charts from the Alaska website: 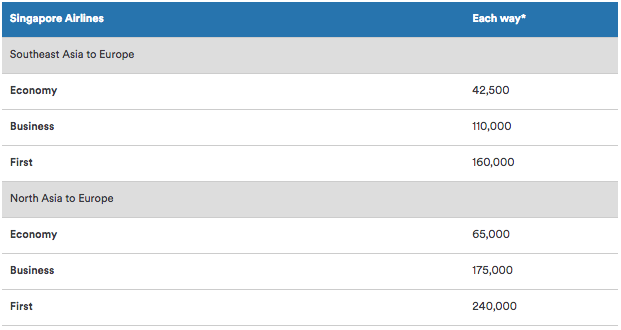 There is no published chart for North America to Europe and the flight from New York JFK to Frankfurt never came up in the search results either. Unfortunately that suggests this route won’t be available.

What also never came up even though it should be theoretically available is Los Angeles to Tokyo even after searching the entire month.

At the same time Mileage Plan members can now also earn miles on Singapore Airlines as per the earning chart below:

The ratios and bonus levels especially for Business & First Class is pretty substantial. If you fly in First Class that would result in a huge amount of miles especially as Alaska Elite Member as I learned recently with my Cathay Pacific First Class flights.

Alaska Mileage Plan has really developed into a gem between the frequent flyer programs as far as the opportunity to collect and redeem mileage is concerned. The program is quite generous too and I can’t help but wonder for how long the company can afford to be that free giving in the perks such as routings, mileage bonuses and stopovers.

This Singapore Airlines partnership is a great addition. I wish availability on some routes such as LAX-NRT would be better. That being said SQ flights are substantially more expensive than widely available Japan Airlines and Cathay Pacific which is hard to justify considering the value of the miles.

Airfare of the Day [First Class] ALASKA AIRLINES Chicago to Los Angeles (or v.v.) from $229 OW