Emirates has been scheduling their new Dubai-Barcelona-Mexico City route with BCN-MEX operating as a fifth freedom route but now a Mexican judge has taken issue with it, granting an injunction against this service as sought by competitor Aeromexico.

Emirates planned to start flying on December 9th of this year with flights being available to book since the summer, meaning there will be quite a few people affected by this.

The scheduling of the flight was negotiated with and eventually approved by the Mexican government but Aeromexico wasn’t too happy about competition on the MEX-BCN route, especially from a carrier that provides a quality services.

A judge decided to grant a writ of amparo to Aeromexico that stops the agreement of air services that was signed between the governments of Mexico and the United Arab Emirates which prevents the arrival of Emirates Airlines to our country. …

With this decision the Dubai-Barcelona-Mexico flight as planned by Emirates Airlines will not be able to take place. …

Emirates informed that it will appeal Aeromexico’s writ of amparo which orders the Mexican government to stop any action based on the bilateral agreement between Mexico and the UAE. …

Emirates mentioned that due to the altitude of Mexico City they can operate a direct Dubai-Mexico flight but on the return they need to make a stopover in Barcelona [to service/refuel the aircraft]. …

It’s clear that Aeromexico wants to fight off competition here. The national carrier flies to Barcelona with a B787 Dreamliner and while the aircraft is new the service is no match to what Emirates would be able to provide. It’s likely that EK would also be cheaper and drive down prices on this route.

The Business Class cabin however would be better on Aeromexico’s 787 compared to the B777 of Emirates with a 2-2-2 configuration: 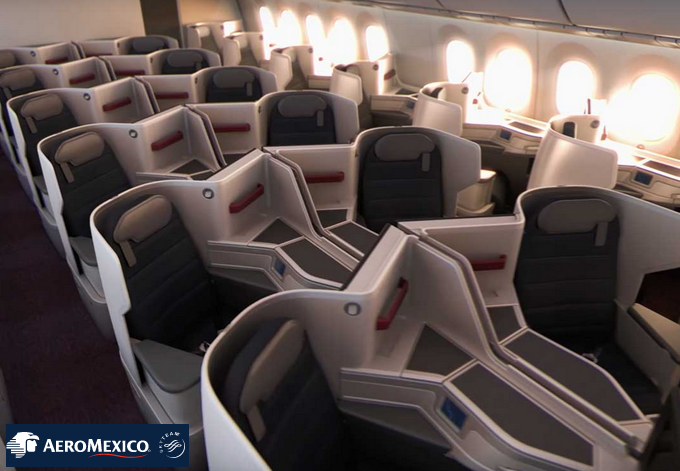 The article also has a statement from the local pilots union stating the government of Mexico didn’t follow proper procedure to negotiate the approval of the flight and that an official without sufficient powers signed the agreement which would make it null and void.

Aeromexico isn’t alone in their efforts to battle ME3 carriers that encroach on their home turf. Airlines all over the world have engaged in lobbying efforts and legal action to fight off ME3 airlines and prevent them from operating flight to/from their markets. Some with more, some with less success.

It would be interesting to learn what argument persuaded the judge in this case to grant the injunction. Not suggesting there was anything improper going on behind closed doors but from a legal perspective. It seems this matter has to work it’s way through bureaucratic channels in Mexico before Emirates will be able to take off (if ever).