Our Compensation Clinic this week is a case I had last month when renting a car from Europcar at Frankfurt Airport in Germany. 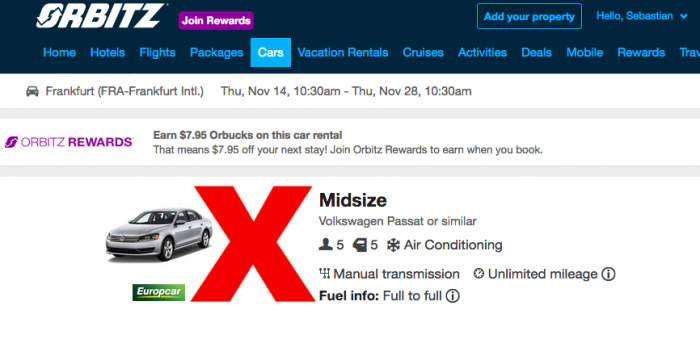 Remember that you can always email us, send a message via Facebook or use Twitter and include photos too. We’ll try to cover Reader Questions & Comments here every Sunday.

When renting cars in Germany nowadays I exclusively reserve via Orbitz/Expedia because they have the most competitive rates which are often less than 50% of what the car rental companies themselves have on their website. It’s always possible to add your frequent renter information later.

Usually I end up with either Sixt, Avis or – as in this case – Europcar.

I decided to reserve a large Volkswagen Passat or equivalent and the price was once again extremely low: 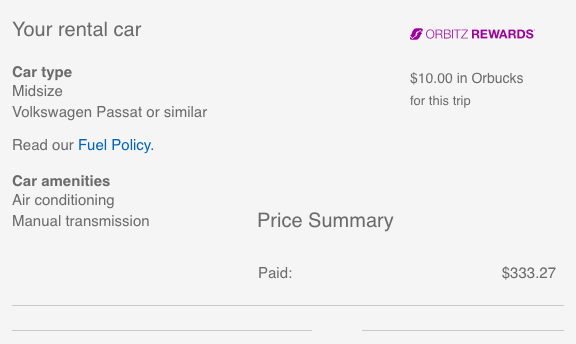 A 19 day dar rental for $333 is pretty good. In fact it’s cheaper than owning or leasing your own car considering there are no extra costs such as insurance or maintenance involved.

In any case I reserved this category because I had quite a bit of baggage with me and the Passat is a rather large car. I’m also Europcar Privilege Gold so at least that should secure me a proper car from whatever is available that day.

The problem started at the Europcar counter when I was told they didn’t have Passat vehicles that day and that they could give me a Ford C Max. I first had to check out what that was because I’m simply not familiar with these models so I used google and let’s just say it was far away from a VW Passat or even a Midsize car.

However the real problem here appeared to be with Orbitz. As per the agent and later a customer care agent with Europcar itself Orbitz/Expedia didn’t reserve a car category that corresponds with a Passat in the first place but something lower. In short: Their advertisement is simply wrong and this might be deliberate.

Eventually the station found me a Mercedes B Class which however still isn’t the same space wise as a VW Passat. I decided to take the car and open up a case with Orbitz later on as I already wasted 40 Minutes with this.

I later contacted the Orbitz Platinum Hotline and opened a case file. This callcenter is offshore in the Philippines so results are really hit and miss. Eventually it got escalated to Orbitz Tier 2 Customer Care Team and I received the following reply:

Thank you for contacting Orbitz about the charges for your car reservation with Europcar.

We do understand that you are requesting a refund for the rate differences since you were given a different car. We would like to inform you that Orbitz has initiated your refund of USD 80.00 to the card used on your original booking. It will be released within 24 hours and may take up to seven days before the credit appears on your statement. The time it takes to post to your account depends on how quickly your credit card company processes the refund.

We apologize for the inconvenience this may have caused you.

Thank you for choosing Orbitz.

So an $80 refund (which is what I asked for, considering the difference in car category and the trouble involved) that eventually brought the price of the rental down to $253 for 19 days plus earning $10 Orbucks in the process.

This is an issue that doesn’t affect just myself but everybody reserving cars through Orbitz / Expedia. Even after I notified their team about the incorrect categories they didn’t do anything against it and as per this morning still sell Europcar cars the same way. You can easily see what category they actually reserved when you look up the reservation on the EC website after payment.

Orbitz should really fix this problem, it’s a very dishonest way of providing services especially when people rely on the size of the cars offered as they travel with multiple people or baggage items.