IAG, the parent of British Airways, Iberia, Aer Lingus, Vueling, and Level, has reached an agreement to acquire its Madrid based rival for €1B. 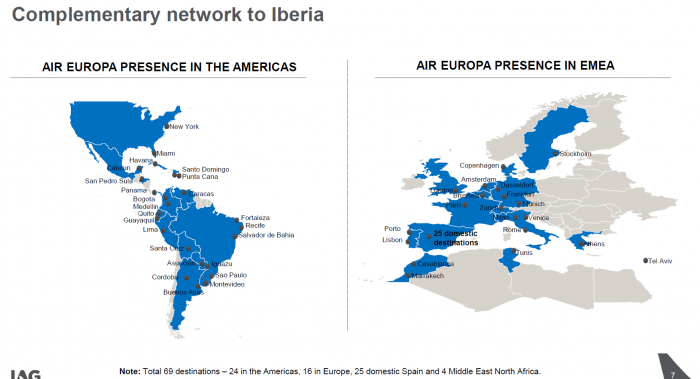 Air Europa flies to 24 destinations in the Americas, 16 in Europe, 4 in the Middle East and North Africa, and 25 in Spain.

Here’s the announcement from IAG:

International Consolidated Airlines Group (“IAG”) and Globalia (“Globalia”) are pleased to announce that definitive transaction agreements have been signed under which IAG’s wholly owned subsidiary, IB OPCO Holding S.L. (“Iberia”), has agreed to acquire the entire issued share capital of Air Europa (“Air Europa”) for €1 billion to be satisfied in cash at Completion (the “Acquisition”) and subject to a closing accounts adjustment.

IAG has a strong track record of successful acquisitions, most recently with the acquisition of Aer Lingus in 2015 and we are convinced Air Europa presents a strong strategic fit for the group.”

“This is of strategic importance for the Madrid hub, which in recent years has lagged behind other European hubs. Following this agreement, Madrid will be able to compete with other European hubs on equal terms with a better position on Europe to Latin America routes and the possibility to become a gateway between Asia and Latin America.”

Air Europa is one of the leading private airlines in Spain, operating scheduled domestic and international flights to 69 destinations, including European and long-haul routes to Latin America, the United States of America, the Caribbean and North Africa. In 2018, Air Europa generated revenue of €2.1 billion and an operating profit of €100 million. It carried 11.8 million passengers in 2018 and ended the year with a fleet of 66 aircraft.

The Board of IAG believes that the transaction would:

The Air Europa brand will initially be retained and the company will remain as a standalone profit centre within Iberia run by Iberia CEO Luis Gallego. The managements of IAG and Iberia anticipate opportunities to unlock value through the Acquisition across three key areas:

The Acquisition is expected to generate cost synergies across selling, general and administrative expenses, procurement, handling and distribution costs with full run-rate synergies to be achieved by 2025. IAG expects implementation costs to be phased over the same period.

In addition, the Acquisition is expected to generate significant revenue synergies by 2025, including:

The Acquisition is expected to be earnings accretive in the first full year following Completion and accretive to IAG’s return on invested capital within four years after Completion.

The Acquisition will be funded by external debt. After Completion, IAG’s net debt to EBITDA is expected to be 0.3 times higher as a result of the Acquisition compared to 1.2 times last reported at the end of Q3 2019.

Assuming satisfaction of all conditions to the Acquisition, Completion is expected to take place in 2H 2020.

IAG has agreed to pay Air Europa a break fee of €40 million in the event that the transaction fails to receive the necessary regulatory approvals and either party elects to terminate the transaction agreement.

Difficult to see how any competition authority would green light this acquisition. IAG would buy out a competing airline and form a second fortress hub in Madrid like they already have in Heathrow.

Combining Air Europa to Iberia would create a monopoly reducing competition that would undoubtedly lead to higher fares. Interesting to see how this one will play out.