An Aeroflot passenger who likes to travel with his beloved pet cat has caught the attention of the airlines security department after he presented a skinny body double in lieu of his obese cat for inspection at check-in. 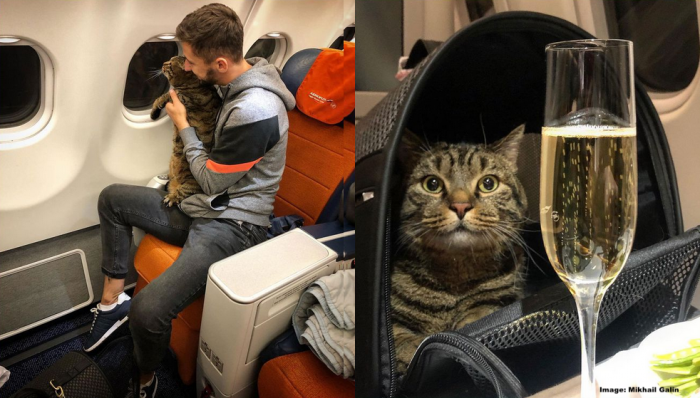 The customer then switched the cats back in their carriers and bragged about the whole spectacle online which unfortunately went viral and Aeroflot investigated the matter, eventually cancelling his mileage account.

Sometimes human love for their four legged friends goes over the top but one has to give this guy points for creativity designing this elaborate scheme to get his cat on board.

The Washington Post reported last night that all the publicity might have been his downfall in the end but many figures on Russia are now calling on Aeroflot to have a heart for cats and reinstate the account.

Mikhail Galin was distraught when Russian airline Aeroflot told him his cat, Viktor, was too heavy to fly in the cabin. … Aeroflot allows pets in the cabin if they and their carrier container max out at 17.6 pounds, but Viktor weighed in at 22. …

Then he came up with what seemed like the perfect solution: a “mini-Viktor” body double. With the help of friends and the power of social media, he found a “miniature kitty” named Phoebe to present for inspection.

“After spending another night in the capital, we went to the airport with a cat, a cat double and his owners,” Galin wrote, according to a translation of his Facebook page. The switcheroo was a success: Phoebe was deemed an acceptable weight, but Galin ultimately brought his pudgier buddy onboard.

Photos he posted on Facebook showed the nearly 4-year-old kitty perched on Galin’s lap, peering out a window and gazing at a glass of champagne from his carrier.

“He liked business class a lot better than economy class, because he considered himself superior,” Galin says.

But the story didn’t end there. Aeroflot confirmed Wednesday that it had kicked Galin out of its loyalty program and stripped him of his airline miles for breaking the rules. The carrier started investigating after the tale took off online and determined Galin “had seriously violated a number of animal transportation rules,” including failing to check an over-sized pet into the cargo hold and removing the cat from its carrier on board.

“This information has been confirmed by CCTV footage,” the airline said in a statement. “During pre-flight procedure, the passenger took out of the container a big-sized cat resembling in appearance the one in the photo made on board and posted on the passenger’s social media page later.”

Galin, who said he had 370,000 miles in his account, told The Washington Post he found out about the punishment through media reports.

“I did break their rules,” Galin says. “Because of that, their internal program decided to hand down a punishment, and I can only agree with it.”

Commenters chimed in with support for Viktor’s plight. A politician with an apparent soft spot for pets and creative owners wrote a letter to the airline urging it to return Galin’s miles and change its policies, NBC said. The Kremlin, for its part, declined to weigh in, according to Russian media.

But the news hasn’t all been bad. Some companies have stepped forward with offers, Galin said, because they don’t agree with the airline’s action. Viktor appears to be nearing cat-fluencer status.

“A few companies have offered cat food for an entire year,” Galin says. “Other companies are offering bonus miles for car-sharing. I’ve been offered a taxi for practically unlimited use. I’ve even been offered a jersey in celebration of Viktor.”

In retrospect I guess the owner of the cat wishes he’d been a little bit more low profile with the entire situation and nobody would have been the wiser. Let’s face it who would suspect someone to go to such elaborate scheming in order to make the cat compliant with on board limits!?

Glad that many stepped up and offered “sponsoring” as maybe it makes up for the 280k lost miles. That being said Mikhail the passenger in this case did break the rules and admitted as much, not whining about it.

The likely reason why Aeroflot came down hard on this passenger is to set and example and because he publicly made a fool out of the carrier circumventing their rules. It would probably have been better to not make this a public post and allow it to be shared all over the internet.

Different Airlines have different pet in cabin policies that include weight restrictions for the animals plus the restriction that the pet is not allowed to be taken out of the carrier. While it makes for cute pictures not everybody on board is thrilled of having the cat/dog or whatever other animals the passenger might carry out in the open. The pet also might get scared and suddenly run loose on the plane, then good luck!