After Lufthansa has officially put LSG Skychefs up for sale this week and is in last negotiations with Gate Gourmet, LSG employees are escalating their previous strike action and will not provide any flights today (Friday November 22nd) with either food or beverages. 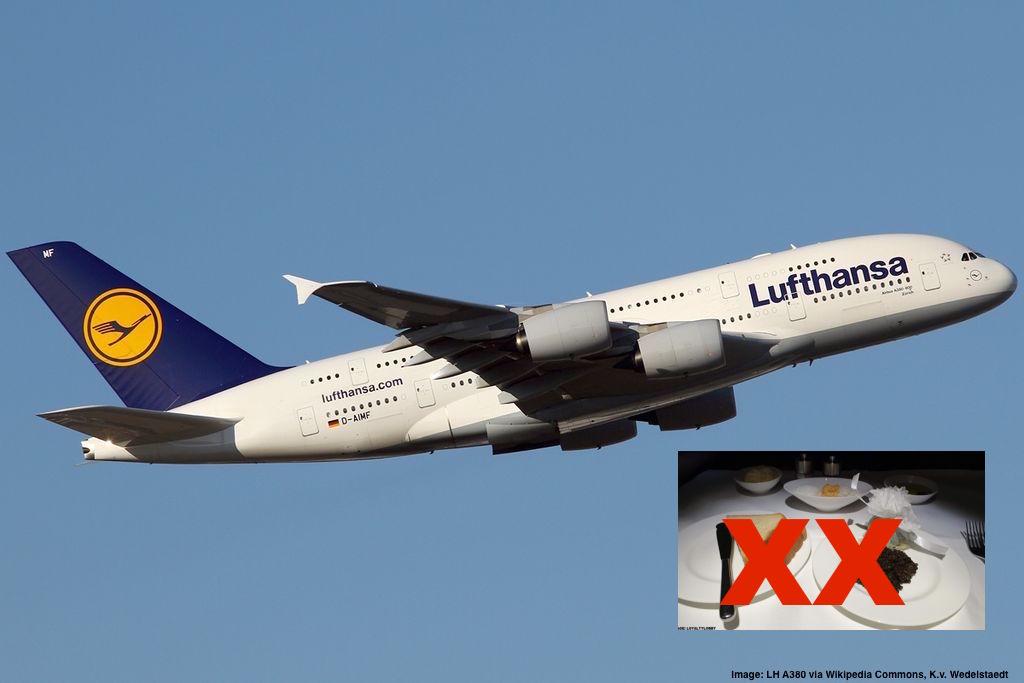 Once again Lufthansa has not announced this strike action on their website, leaving customers totally in the dark about this but many Business- and First Class passengers have received phone calls advising them of the situation.

I was also able to verify this information with a Lufthansa Purser who was informed about this by the company.

According to the information we received from two readers Lufthansa called them up yesterday afternoon (scheduled to fly Lufthansa First Class to Singapore today) saying there won’t be ANY catering on their flight and they should purchase food & drinks prior to the flight. Lufthansa would reimburse the passengers later.

Another passenger scheduled to fly to Bangkok in Business Class received a similar call last night. So far we haven’t heard from Lufthansa informing any Economy Class passenger about this.

The Lufthansa website in the meanwhile shows nothing at all about this strike action. Just like in the past Lufthansa refuses to publicly acknowledge and inform affected passengers about this and the will find out either at check-in or even worse at the gate.

Tonight the Handelsblatt (access here – in German) reported that the Switzerland based Gate Gourmet is the last remaining party interested in purchasing LSG after both dnata as well as Do&Co are no longer in the pool of bidders.

Gate Gourmet is already the worldwide largest supplier of inflight meals, selling LSG to the company would create a quasi monopoly and Lufthansa themselves might become dependent on that. Especially when it comes to pricing of the catering airlines would have almost no alternatives or space to negotiate.

Personally I’d request Lufthansa to rebook me to another airline if catering isn’t guaranteed. The problems which the airline is confronting passengers with are getting out of hand this year. One strike after the other paired with the fact that LSG has already engaged in several work slowdowns during the summer which we reported about in detail.

It took Lufthansa weeks to publicly acknowledge that this was in fact happening, until then there was only silence and people who complained were compensated with miles or cash.

For all those affected by this, good luck for today and maybe comment below about your experience. Meanwhile Lufthansa faces yet another strike by flight attendants as negotiations with the UFO Union broke down again this week. Oh joy!

I still find it hard to believe that Lufthansa would operate long haul flights without ANY catering no matter which class we’re talking about. Yet that’s exactly what the hotline has told the two passengers flying in Premium Classes to Asia today. This is the downside when a company chooses not to publish reliable information. I suggest to call Lufthansa and ask for detailed information concerning individual flights, worst case request a rebooking.

One can only guess which flights are affected by this thanks to Lufthansa’s miserable communication in this matter. Definitely the flights ex Germany but what about the inbound flights from overseas? I’d imagine those to be catered properly.

Last Call: Lufthansa Miles&More Flex Plus Awards Without Airline Surcharges For Bookings Made Through February 28, 2021