LATAM in need of a cash infusion made a deal with Delta for an equity stake (read more here) that meant an exit from the Oneworld Alliance that was set to take place on October 1, 2020 (read more here).

Now, LATAM has sent out an update to its frequent flyer program members, implying that they are working to accelerate the Oneworld exit while maintaining bilateral deals in place with most alliance members sans American Airlines.

You can access LATAM’s page for Delta migration here.

Here’s a copy of the email that LATAM sent out: 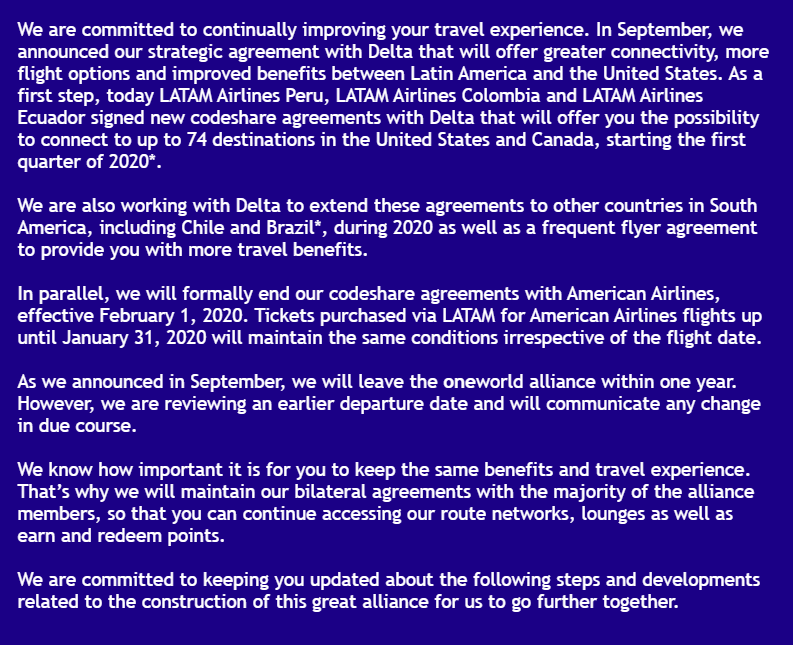 LATAM Airlines Peru, LATAM Airlines Colombia and LATAM Airlines Ecuador signed new codeshare agreements with Delta that will offer you the possibility to connect to up to 74 destinations in the United States and Canada, starting the first quarter of 2020. We are also working with Delta to extend these agreements to other countries in South America, including Chile and Brazil, during 2020 as well as a frequent flyer agreement to provide you with more travel benefits.

As we announced in September, we will leave the oneworld alliance within one year. However, we are reviewing an earlier departure date and will communicate any change in due course. We know how important it is for you to keep the same benefits and travel experience. That’s why we l will maintain our bilateral agreements with the most of oneworld alliance members, so that you can continue accessing our route networks, lounges as well as earn and redeem LATAM Pass Points.

In parallel, we will formally end our codeshare agreements with American Airlines, effective February 1, 2020. Tickets purchased via LATAM for American Airlines flights up until January 31, 2020 will maintain the same conditions irrespective of the flight date.

It seems that LATAM understands that they have a mess on their hands. They are exiting Oneworld while keeping bilateral agreements in place with most of the alliance airlines? This doesn’t make much sense. Why exit an alliance if you are going to keep most of the agreements sans the AA one? Was working with American Airlines so toxic for them?

You would think that LATAM’s frequent flier program members that travel outside of South America would not be too keen on this development. They are losing most of the Alliance benefits that are granted to elite members. Also, Delta and SkyTeam member airlines don’t allow elite members to access lounges on domestic travel, unlike Oneworld and Star Alliance (AA and UA frequent fliers cannot access their own carrier lounges when traveling domestically).

Were LATAM so desperate in raising cash that they had to turn Delta? Wasn’t American Airlines or other Oneworld Alliance airlines unwilling to invest some equity? Traditionally airline investments to other airlines haven’t turned out too well at the end. Just look at what happened with Etihad and their Equity Alliance that has completely unraveled with billions lost in the process.

Delta belongs to a third rate SkyTeam alliance, and LATAM has not even indicated that they would join it. The subject line on the email that LATAM sent out is “New alliance with Delta to take you further” is a lie. It perhaps made LATAM financial situation better considering the current environment in the country, but nothing good will come out of this neither LATAM nor Oneworld frequent flier program members.

I have extensively used Oneworld’s around-the-world products, starting one today in Karachi, and each has had quite a few flights operated by LATAM. The exit from the alliance makes this product much less valuable for me as Oneworld practically loses all connectivity WITHIN South America.