Cathay Pacific Asia Miles has expired 36 months later they were earned, but this will change on January 1, 2020.

All Asia Miles earned on or after January 1, 2020, don’t expire if you have earning or spending activity at least once every 18 months. This change doesn’t affect miles earned earlier. 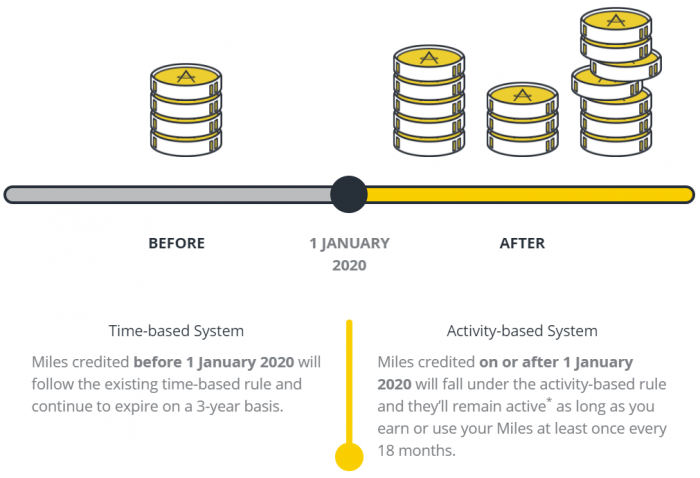 Note that members can convert old miles to new ones for a modest service fee:

Here’s an announcement from Asia Miles:

From 1 January 2020, so long as Asia Miles members earn or use their Miles at least once every 18 months, their Miles will remain active. With the new arrangement, members will have more control of their Miles and enjoy the best choices, however, wherever and whenever they use them. Miles will no longer expire three years after being credited to their account.

“For 20 years, we’ve been developing inspiring rewards and experiences for our members. We aspire to have a timeless relationship with our members, and because we know that every Mile counts, we’re making our Miles as timeless as the experiences and memories they create with us,” said Paul Smitton, Chief Executive Officer of Asia Miles.

Keep earning or redeeming and Miles will remain active

Members can keep their Miles active by earning or using Miles at least once every 18 months. They can choose from a wide array of options across Asia Miles’ over 800-strong network of travel and lifestyle programme partners. The action can be as simple as:

 Using Miles to redeem an array of Lifestyle Awards from concert tickets to tech gadgets, homewares and more

So, miles earned from January 1, 2020, onward won’t expire as long as you have any activity every 18 months while they now expire 36 months from when they were earned.

I don’t like programs that have hard points or miles expiry, although this way, they force you to use them in one way or another unless you allow them to expire (I have let some).

I had a stash of Asia Miles while ago that were transferred from eBay Anything Points and earned from Priceline bookings. I have a recollection of difficulty trying to use them due to not being able to book partner awards online and having to call Asia Miles that was difficult due to busy phone lines.