It’s the end of an era for travelers at LAX as industry veteran SuperShuttle has informed franchisees they will shut down their Los Angeles operations effective January 1, 2020.

The last rides will be on December 31, 2019 after which passengers have to seek out alternate arrangements and if already prepaid seek refunds rather sooner than later.

The news came pretty abrupt as media reported a couple hours ago that the company will go out of business after 36 years of service yet no word from the company itself as of right now on their website.

SuperShuttle, the shared van ride that has served passengers heading to and from airports around the world, including Los Angeles International Airport, will cease operations at the end of the year.

The company — which was founded in 1983 to serve LAX and expanded nationwide as well as to Latin America, Canada, Europe and Asia — has been plagued by competition from Uber and Lyft. In recent weeks it has pulled out of airports serving many cities…

A Tuesday letter from the company to a Los Angeles-area franchisee, obtained by The Times, says: “SuperShuttle plans to honor all reservations and walk-up requests for service” through Dec. 31.

Attempts to reach Mark Friedman, identified as general manager in the letter’s signature line, were unsuccessful Thursday. SuperShuttle executives could not be reached for official comment. But two SuperShuttle reservations agents reached by telephone confirmed that the company was going out of business, as did a company executive who was not authorized to speak publicly. …

At LAX, shared van rides plunged by two-thirds in the first half of this year compared with the first half of 2016, the first full year that Uber and Lyft operated there, according to city data. Trips on LAX’s FlyAway buses also sank by two-thirds during that time; taxi trips fell 39%; and courtesy shuttles to car rental facilities, parking lots and hotels saw a 20% decline. The number of Uber and Lyft trips, meanwhile, more than doubled.

The letter to the franchisee cited “a variety of factors” for the company’s closure, “including increasing costs and changes in the competitive and regulatory landscape” that “have called into question the economic and operational viability of the company’s operations.”

The shutdown will leave franchisees in the lurch — hundreds of them in California alone.

“A lot of us own our vans, and now we don’t have jobs,” Mohammad Baraei said Thursday afternoon in between shuttling people to and from LAX, adding that he still owes about half the payments on his $66,000 vehicle. “I can’t even file for unemployment. I don’t know what I’m going to do.”

This is a rather strange way of closing a station considering it’s not a bankrupcy. Giving customers and especially employees less than three weeks notice just before Christmas?

I for one wasn’t familiar with the ownership structure of SuperShuttle vans. The article isn’t 100% clear apparently these are sometimes owned by the drivers who operate as independent franchisees? I wonder though what kind of SuperShuttle van would cost $66,000. The newest Ford Transit have an MSRP of max $45,000, not sure which modifications would cost an extra 20k.

Anyhow, here is the message passengers receive when trying to reserve a ride on January 1st 2020: 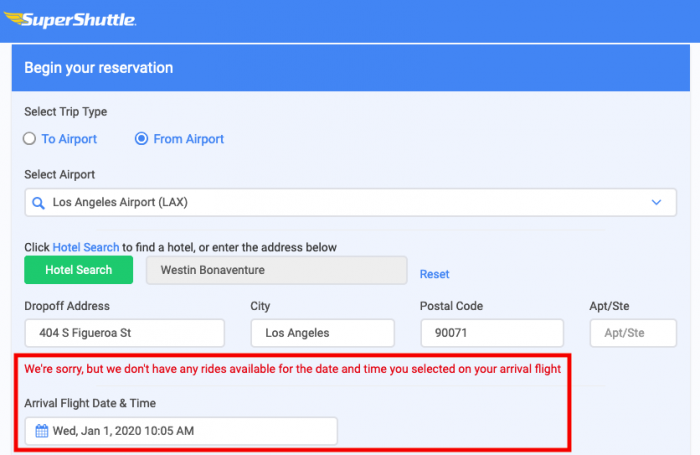 Supershuttle will continue to operate at their other locations for the time being, that is until they deem these markets not worthy anymore either I suppose.

I have been using SuperShuttle at LAX quite a lot since I first visited the city 20 years ago and later during my student years. It was always a somewhat mixed experience and if you were the last passenger to be dropped off then the ride could take quite some time (and lead to some rather unsavory areas of Los Angeles).

As alternative to SuperShuttle passengers could use PrimeTime Shuttle instead. Both services still allow curbside pickup at LAX contrary to the disastrous shuttle service to the rideshare pickup lot for Uber/Lyft we previously wrote about.

Hopefully the drivers and franchise owners will be able to quickly resolve their employment situation, it’s not a great situation to learn about the loss of your job especially short before Christmas.

SuperShuttle passengers with existing prepaid reservations should check the status of the reservation and if possibly cancel it in order to receive a refund. Since SuperShuttle hasn’t published any statement yet it’s impossible to say if they will cancel and refund these reservations automatically.

Reader Question: Stopover Versus Transfer – What Is The Difference?