IHG has two separate guest recognition programs for select brands (InterContinental and Kimpton) that are part of the IHG Rewards Club. 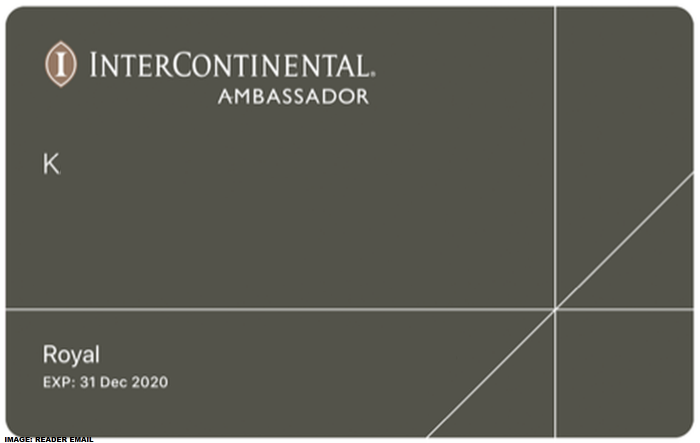 There is the InterContinental Ambassador program with Royal Ambassador and Kimpton with Inner Circle statuses with not very well communicated or disclosed qualification requirements.

A LoyaltyLobby reader dropped us an email that her Royal Ambassador status was removed now through the end of 2020 (usually, these have been processed in late December and in January).

IHG has also indicated that they have started to process Kimpton Inner Circle renewals and invitations for 2020.

Here’s a response that another reader received last week regarding Royal Ambassador renewal:

Thank you for contacting InterContinental Ambassador. My name is Sara REMOVED and we would like to thank you for your loyalty as a Royal Spire Ambassador member. We you are doing well in London.

As Royal Ambassador status is given by invitation only by the higher management, we also don’t have any information regarding our member’s status regarding the upgrade on the program. Invites will be processed on the last weeks of January 2020 or early February 2020. Rest assured that your InterContinental stay activities will be closely monitored. It is our sincere hope that you will be able to qualify to the Royal Ambassador tier.

I understand that this is not the response you were hoping for and apologize for any disappointment caused. If there’s anything else I can assist you with, please let me know.

Based on recent observations, the only thing that counted was the revenue at InterContinental hotels (this has now been expanded to include Kimpton and Regent spend – read more here).

This is anxious times for both Royal Ambassador and Inner Circle members. Considering that the spend at Kimpton’s now counts towards Royal Ambassador status, why not combine these guest recognition programs?

IHG has done extensions and invitations, usually in a few batches. It seems that at least some Royal Ambassador members have already been renewed for 2020, and Kimpton Inner Circle renewals are next.