After Lufthansa recently sold their caterer LSG Skychefs to Gate Gourmet, local unions in Germany have again called for strikes but were struck down by the courts last night. 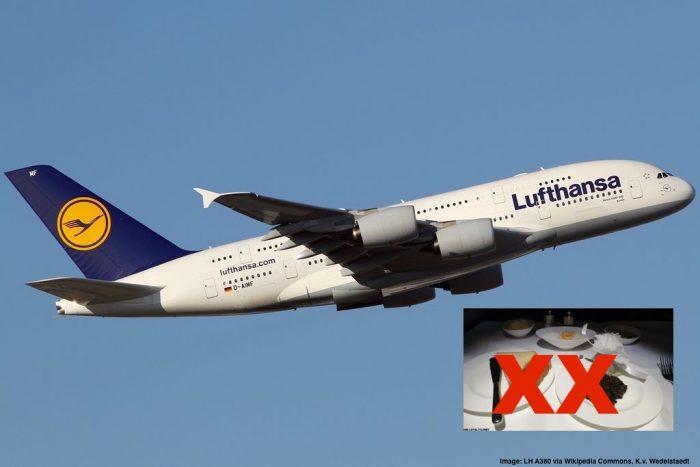 Nevertheless regional flights today are affected by limited catering and Lufthansa is distributing snacks and drinks in the terminal which passengers can take on board.

Initially the ver.di union has called on LSG workers to go on strike once again for today but after an injunction was filed the courts decided that the strike today would not be allowed.

Der Spiegel (access here – in German) reported that the unions are planning to appeal the decision and possibly schedule the strike to a later date.

A Lufthansa spokesperson said that due to the courts decision coming very late last night there would be delays in stocking regional aircraft properly for their service and passengers will experience shortfalls in catering nevertheless.

Apparently at least the long haul flights are being catered properly judging by a sms blast Lufthansa sent out this morning: 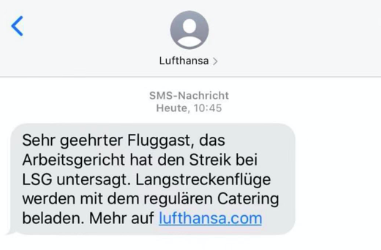 Yesterday evening, the labor court banned the strike at LSG Sky Chefs in Frankfurt and Munich. Our top priority is to ensure a reliable timetable and safe flight operations. Production bottlenecks continue to occur due to the court’s short-term decision in the late evening and higher sickness rates in LSG’s operations. As a result, Lufthansa is unable to provide the usual selection of beverages and meals on some domestic German and European* routes. Long-haul flights are loaded with the regular product.

Lufthansa cannot rule out a short-term change in the situation. We kindly ask our guests to keep themselves informed about the current status on lufthansa.com.

The airlines has created a compensation scheme to reimburse passengers for f&b they purchased themselves to take onboard:

If you have already choose to buy your own food and thereby incur costs, these costs will be refunded by Lufthansa after a validity check.

Please submit the relevant receipts via our online contact form or by email to customer.relations@lufthansa.com. Lufthansa will respond to your refund request as quickly as possible.

It’s a pretty sad state of affairs with Lufthansa this year. The carrier has been plagued by strikes and work slowdowns (employees calling in sick) throughout the year. In the past Lufthansa has offered their customers a credit of extra status miles as a small token but so far we’ve heard crickets and it’s already December 19th.

Previously it took Lufthansa weeks to publicly acknowledge that this catering strike was in fact happening, until then there was only silence and people who complained were compensated with miles or cash.

Whenever a new strike will be announced I suggest to call Lufthansa and ask for detailed information concerning individual flights, worst case request a rebooking to other carriers such as Austrian Airlines and SWISS.