Now, members whose status is soon downgraded have been emailed today. Some with rather high spend have been purged from the program.

Here’s a copy of the email: 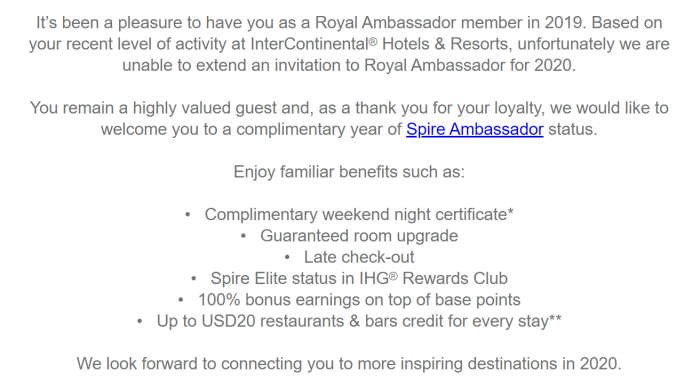 The reader’s spend with InterContinental hotels had been close to $11K, and two more stays left for the year.

My InterContinental spend last year was roughly the same (could have been a $1K more) and with the same result as the reader. However much I like some InterContinental hotels, I have spend less than 10 nights with the brand since the end of January (when the downgrade took place).

My advice for those Royal Ambassador that were downgraded would be to move the spend to Marriott, Hyatt, or Hilton. I decided to move my InterContinental nights to both Hyatt (91 nights this year) and Hilton (70) nights, and eventually qualify for the lifetime status with both. I already have lifetime Titanium status with Marriott Bonvoy.

The InterContinental Royal Ambassador benefits were previously outstanding with guaranteed 8 AM check-in and 4 PM check out, complimentary minibar beverages (daily), and suite upgrades. Most of these benefits have been cut or severely watered down.