Japan Airlines is currently advertising an interesting promotion during the summer months of 2020, giving away 50,000 free round trip domestic tickets to foreign visitors without any flight requirement. 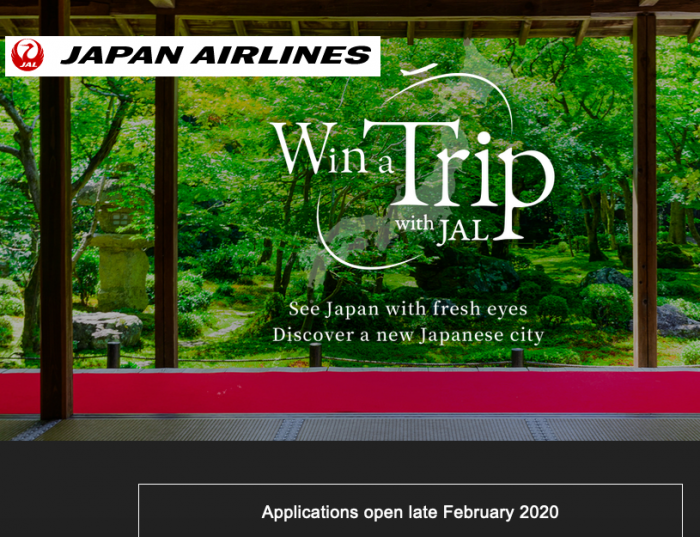 The special addition to this promotion is that it’s a mystery destination so JAL will ultimately decide where the trip goes to, four destinations will be given during the application process and departures can be exclusively Tokyo (Haneda) and Osaka (Kansai & Itami Airport).

Applicants for this giveaway have to fulfill very little criteria and surprisingly having an incoming international flight with JAL is not one of them.

All you need is to be a member of JAL’s frequent flyer program Japan Airlines Mileage Bank, have a foreign residency and the departure can only be ex Haneda, Kansai or Itami.

The promotional website can be found here and entries begin in late February for travel from July 1 to September 30, 2020.

During the specified period, we are offering up to 100,000 seats on JAL domestic routes.

Enjoy your journey with the traditional Japanese hospitality offered by JAL.

When you apply, JAL will show you four possible destinations.

Then we tell you which one you’ll go to within 3 days of your application.

Embark on a thrilling journey like no other and see what discoveries await at your mystery destination!

Flights depart from / return to Tokyo (Haneda) and Osaka (Itami / Kansai) only.

You can apply as a group of up to four people.

Choose from three or five departure / arrival time slots and find sightseeing tips and information on local specialties when you apply, making it easy to plan your trip.

There is further information about the application process in a graphic provided by Jal:

I imagine the flight details of your flight to Japan can be random, just pick whatever flight. I certainly don’t know any of my flights for 2020 yet and flights always change. Since it can be on any carrier JAL won’t have the means to verify these itineraries anyway and I’d think that the spot checks at the gate as outlined in the T&C will be minimal to non existent either. That would slow down the boarding process a lot and the Japanese hate that. JAL typically boards a 777 within 15-20 minutes with everyone in their seat.

More information will be added to the website in January and then applications open in late February. Keep in mind that you should be able to upgrade these tickets to Business or First Class through cash payment on day of departure which we’ve written about a couple of times. This works for award tickets so why not for these ones too!?

It’s a rather strange yet fun promotion. While the summer with exception of Japanese holidays in August is traditionally low tourism season keep in mind that the Tokyo Olympics will be during that period as well so what surprises me most is that JAL will put an extra strain on their domestic route network during this busy period. Also, having paid nothing for the flight might lead to a lot of no shows.

I’ll enter myself for a trip in late September at which point the steaming hot summer is on it’s way out and so are the masses of Olympic visitors.

These are the preliminary Terms & Conditions for this campaign:

Airfare of the Day [Business Class] JAPAN AIRLINES New York to Jakarta from $2,330