Today we have a Reader Question about an obvious error in British Airways Executive Club earning structure for Japan Airlines on the Helsinki-Narita Route in Business Class.

Our reader had two flights on Japan Airlines via Helsinki and was wondering why the earnings for Avios were so low on his account despite flying in paid Business Class.

He reached out to us and we decided to investigate with at least some results.

I’m frequently traveling on the Helsinki to Tokyo Route via Japan Airlines (much better than Finnair) and realized that British Airways credits me the incorrect amount of Avios every single time. The company books Business Class for me yet I only get 3660 Avios points per way. They do credit me the correct 140 status points though. British Airways is ignoring my requests to fix it. Is this a known problem?

This sounds like an odd problem indeed. I never had a problem with British Airways crediting the wrong amount of miles or Avios in this case but it seems someone programmed the earnings chart incorrectly and it must have been going on for quite some time: 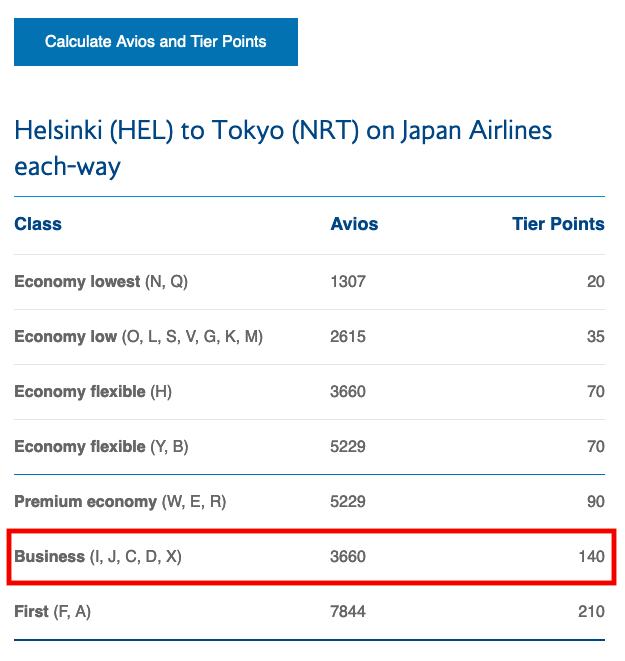 As per the mileage calculator on ba.com Business Class in all paid classes earns just 3660 Avios. The same as Economy semi-flex and much less than Premium Economy. This is an obvious error so why isn’t British Airways fixing this?

I decided to reach out to BAEC through my own account (Gold) to point them to the error.

What was BA’s response?

British Airways is really a special piece of work these days. What a basket case that company has become. Mind you this inquiry had absolutely nothing to do with my account.

I can feel the frustration Karl has because he is getting the runaround by BAEC for the past months. In the end I gave him the advise to escalate the matter up the chain and address it to some higher ups email address (including Alex Cruz) or just shift the mileage collection to a different program. The Tier Points do post correctly so he’s losing out on approximately 3,500 Avios per segment in Business Class.

The way British Airways is communicating with their customers nowadays has become a total joke. Especially since in this case the error is clearly caused by their own internal programming. Instead of fixing the problem or directing the matter to someone who is able to do it the useless Customer “Service” Representatives play email ping pong.

I wouldn’t count on this being fixed anytime soon so beware if you’re flying Helsinki-Narita on Jal when planning to credit the segment to BAEC. Maybe find another program for the miles or be prepared to forego the Avios you should be getting in Business Class.