All 167 passengers and nine crew members on board are dead following this tragedy which comes amid regional tensions between Iran and the United States government.

The admission of guilt included a Tweet by Iran’s President Hassan Rouhani an hour ago calling the incident a “disastrous mistake” and that the missiles were fired at the plane due to “human error”. 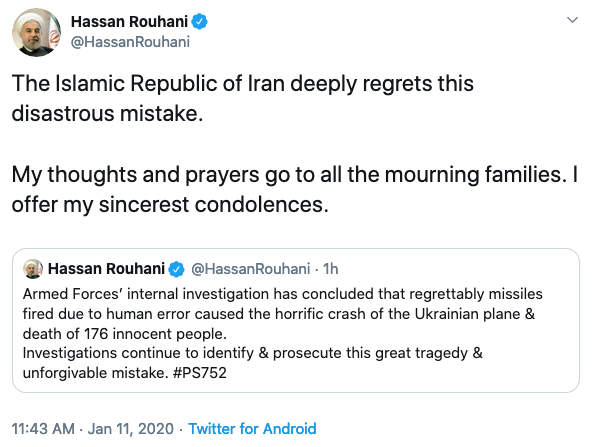 This is huge coming from the President directly and certainly – next to being tragic – deeply embarrassing for the government of Iran that has so far denied any involvement in the crash of flight PS752.

When John wrote about the crash three days ago only preliminary facts were known about the situation including some details about the passengers.

Many of the passengers were dual citizens as stated during a Canadian news program. Prime Minister Trudeau has in past days demanded clarity about the cause of the accident as evidence pointed towards a military involvement in the crash.

The BBC just published an updated report about the downing of the jet:

On Saturday morning, an Iranian military statement read on state TV announced that it had struck flight PS752 with a missile by mistake.

The plane, the statement said, had flown near a “sensitive military centre” of the Revolutionary Guards, a force set up to defend the country’s Islamic system.

Because of heightened tensions with the US, Iran’s military “was at its highest level of readiness”, the statement said. “In such a condition, because of human error and in an unintentional way, the flight was hit,” it added.

In the statement, the military apologised for downing the plane, saying it would upgrade its systems to prevent such “mistakes” in the future.

Those responsible for firing the missile, it said, would be prosecuted. …

The tone was much different prior to this announcement which likely came as a result of more and more unmistakable evidence surfacing.

On Thursday, government spokesman Ali Rabiei accused the US and its allies of “lying and engaging in psychological warfare” in their speculation over the cause of the accident. …

In a tweet on Saturday, Iranian Foreign Minister Mohammad Javad Zarif suggested “US adventurism” was partly to blame for the downing of the Ukrainian jet.

This won’t help to back up Iran’s “clean face” attitude that has been going on for a very long time and hardly buys them any brownie points in the international community or their own people at that. Most of the passengers killed were Iranian either by nationality or descent.

An absolute unnecessary tragedy caused by trigger happy commanders on the ground in Teheran. Hopefully this embarrassing crime will cause the leadership in Iran to calm down, realizing they went more than a step too far.

Civilian airliners being shot down by hostile military are not uncommon and there are in fact sad precedents reaching as far back as the cold war. 1983 Soviet Air Defense shot down Korean Air 007 with 269 fatalities, Iran Air Flight 655 from Tehran to Dubai was shot down on 3 July 1988 by a U.S. warship resulting in 290 deaths and most recently Malaysia Airlines Flight 17 that was downed by rebels on 17 July 2014 while flying over eastern Ukraine with all 298 passengers and crew killed. Senseless and sad!