ANA and Virgin Australia made an announcement today about a launch of a commercial agreement between the airlines.

ANA and Virgin Australia will start codesharing select flights from January 30, 2020, and this partnership will extend to other flights and frequent flier programs later in the year.

Here’s the announcement from ANA:

All Nippon Airways (ANA) and Virgin Australia announced today that the two carriers signed a partnership agreement to enhance connectivity between Japan and Australia. Under the terms of their agreement, ANA and Virgin Australia will implement codeshare flights within Japan and Australia and introduce reciprocal frequent flyer benefits for their members. The partnership will increase convenience and comfort for passengers traveling between Australia and Japan, and increase their ability to explore both countries.

The announcement of the new codeshare agreement comes as ANA expands its presence in Australia with the launch of its new service between Narita, Tokyo and Perth in September 2019, and its plans to increase the frequency of its flights between Haneda, Tokyo and Sydney in summer 2020. Virgin Australia has also just started selling their brand-new flights between Haneda and Brisbane.

“We are thrilled to partner with Virgin Australia, an award-winning airline that shares our uncompromising commitment to delivering the highest quality customer service,” said Shuichi Fujimura, Executive Vice President of ANA. “This collaborative effort will allow us to meet growing passenger demand in the region by providing greater choice and flexibility through shared resources, and furthering ANA’s commitment to expanding the Japan – Australia network.”

Virgin Australia Chief Commercial Officer, John MacLeod, said the airline is pleased to partner with ANA, as the partnership allows the carriers to deliver a high level of service for travelers.

“We are excited to commence our first flights between Brisbane and Tokyo, bringing our famous Virgin Australia service to Japanese guests. Australia is a wonderful destination with some of the world’s best beaches, an outback to explore and lots of unique wildlife, and we are so pleased to make it easier for Japanese tourists to see these amazing sights in our country,” he said.

Starting on January 30, ANA and Virgin Australia will begin codeshare on six routes within Australia, allowing ANA customers to travel seamlessly between: 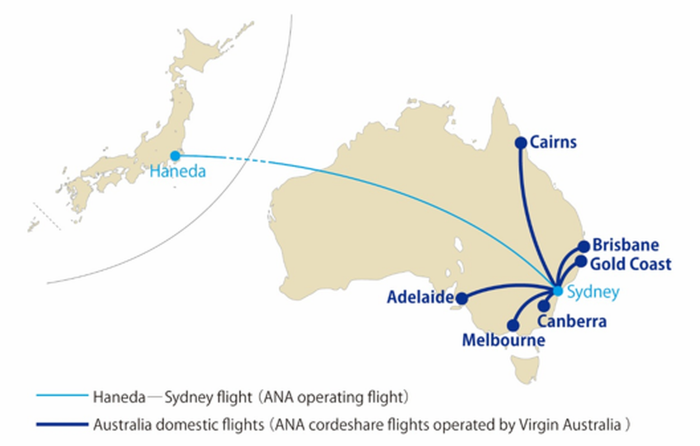 ANA customers will be able to travel on these Virgin Australia services with ANA tickets, having their bags checked all the way through to their destinations and with one seamless booking experience. Later this spring, the carriers will further expand their partnership by commencing domestic and international codeshare routes in Japan and Australia. As part of this expansion, ANA and Virgin Australia will provide members of their frequent flyer programs with reciprocal benefits across both airlines.

ANA and Virgin Australia acknowledge that demand for travel to Japan is increasing due to economic growth in the region as well as prominent global events set to take place in Japan during 2020. The new partnership will allow passengers to connect more seamlessly, and contribute to strengthening the relationship between Australia and Japan by facilitating travel and trade.

ANA is part of Star Alliance, while Virgin Australia is not aligned with any of the three main alliances. It is interesting to see the scope of the frequent flier partnership released later this year. Some of the partnerships are very limited, while others are more comprehensive.

While waiting for Marriott Bonvoy to launch their next global promotion (stay tuned!) and while you can buy their points at a 60% bonus...

Success: Booking The Ritz Carlton Koh Samui For Less Than 5000...