On Monday I wrote about China facing an outbreak of a new strain of the Coronavirus in the region of Wuhan that humans can contract and which has already killed at least eight people with several hundreds infected.

Infections but also deaths have multiplied in recent days and numbers are expected to go up. This comes at the beginning of the Chinese New Year holidays this weekend where more several hundred million people (!!!) are expected to travel throughout the country, with many going on international trips.

You can find my original article from Monday here.

The situation has since deteriorated with more cases of the virus being confirmed outside China including one in the U.S. (Seattle, WA) as well as Macau, South Korea and Taiwan.

South China Morning Post is reporting that as of early morning today all public transport in/out of Wuhan has been cut and the city which has 11 Million people is officially quarantined, yet people are still allowed to leave on private vehicles thus defeating the meaning of quarantine even with spot health checks.

All public transport in and out of the Chinese city of Wuhan, including trains, buses and ferries, stopped at 10am on Thursday as the central government imposed a quarantine to try to contain the spread of coronavirus that has killed 17 people and infected hundreds more.

Local residents had rushed to railway stations and the airport after the announcement of the lockdown on Wednesday night. The government told residents not to leave the city without “special reasons”.

It came as the number of people confirmed to be infected on the mainland reached 571, with 17 deaths, as of midnight on Wednesday, according to China’s National Health Commission. …

Medical personnel were stationed at toll gates and checkpoints on major highways to perform checks on people leaving the city.

A resident surnamed Ding who was driving out of Wuhan said the outward lanes were jammed, with very few vehicles heading into the city.

“Many want to leave,” he said. “There are medics screening each car, checking the temperature of all passengers. People are allowed to leave, but the traffic is moving slowly because of the screenings.” …

Some residents had made early arrangements to leave the city because civil servants had heard about a possible lockdown a couple of days earlier, according to Wang. “A few of my relatives are civil servants and they knew of the lockdown days ahead of its official announcement, so my cousins left the city on Monday to avoid transport chaos,” he said.

A very strange way of handling a quarantine as unless someone already developed symptoms there is no way to detect an infected person during such a spot check along the side of the road. These lackluster measures are probably going to backfire at some point.

The virus is believed to have originally spread from a Wuhan meat market that according to SCMP sells the following animals (among others):

If you’re interested what the definition of a rural Chinese meat market is go to Youtube and watch some videos, I suggest not having a full stomach because it’s absolutely revolting and shows why such a marketplace is a perfect breeding ground for viruses.

That being said lets not forget that for the people living and working there it’s a regular way of life and totally normal just like people living in modern Shenzhen go to robot supermarkets and Starbucks. China is a huge country and the gap in living standard is still enormous. I wouldn’t pin the fault for this on the people but the local governments who let things like these develop.

The airport is closed and flights from Wuhan have pretty much all be cancelled. If you search for flights ex WUH for example on Expertflyer all inventory has been zeroed out and flight status websites show the majority of flights cancelled. Others that aren’t cancelled are probably repositioning flights that move without regular passengers. 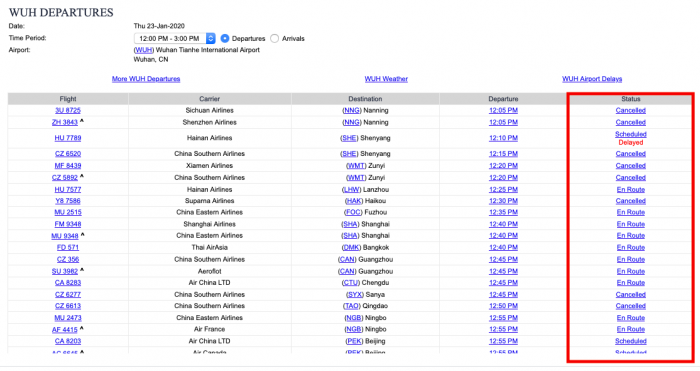 Mind you the travel wave for Chinese New Year hasn’t even fully begun yet and many won’t have the option of using private vehicles.

The U.S. Embassy in Beijing has issued a Health Alert for citizens in China.

Event: U.S. Centers for Disease Control and Prevention has issued a Watch Level 1 Alert (be aware and practice usual precautions) for an outbreak of pneumonia in Wuhan, China, preliminarily identified to be caused by a novel (new) coronavirus.

Travelers to Wuhan should:

Avoid animals (alive or dead), animal markets, and products that come from animals (such as uncooked meat).

The ACS (American Citizen Services) unit is available to citizens who require assistance.

Other embassies has issued similar notices but no travel warning yet at this point.

If you have existing travel plans to China it’s probably a wise idea to consider cancelling those and inquiring with your travel provider about cancellation options. A friend had a reservation with United and while there is no official waiver yet the agent was willing to waive cancellation or change fees for his ticket. You might want to try but there is no guaranteed result.

Hopefully the affected people will be properly cared for in every meaningful way. At the same time I fear the shortsightedness of some to get out of the city for CNY family reunions will have a very detrimental effect helping to get the situation under control very soon.