Air Air Canada jet had to return to it’s origin for an emergency landing last night after the Boeing 767-300 suffered engine and tyre damage on takeoff from Barajas airport. 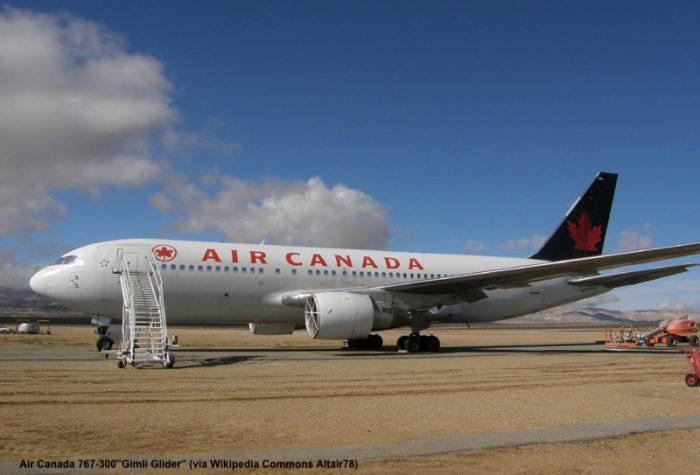 Passengers reported that short after/during take off there was huge bang under the fuselage and then visible smoke and flames came from the left engine after which they had to spend 4 hours on the aircraft while it circled Madrid to burn fuel.

The aircraft carried just 128 passengers plus crew yesterday and short after finally returning to Madrid all were evacuated from the aircraft without injuries.

The Guardian reported about the incident today and what passengers had to say about the situation on board.

An Air Canada Boeing 767 with 128 passengers onboard has made an emergency landing in Madrid due to technical problems after taking off from the city’s Barajas airport.

The Toronto-bound flight AC837 departed from the Spanish capital early on Monday afternoon but had to request an emergency return after one of its two engines was damaged and a tyre ruptured during takeoff. There was no immediate information as to what had caused the malfunction.

Passengers described a tense mood on the plane as it spent nearly four hours flying in circles near Madrid to burn off fuel before its emergency landing.

“Obviously a lot of nervous tension while we were in the air, but the pilots did a terrific job landing the plane,” said one passenger, Brock Mierzejewski from Vancouver. …

Spain’s defence ministry dispatched an F18 fighter jet to evaluate the damage done to the Boeing’s landing gear as it flew around Madrid.

Emergency vehicles approached the aircraft on the tarmac of Adolfo Suárez-Barajas airport soon after it landed at 7.13pm local time (1813 GMT).

In a statement, Air Canada said the plane “experienced an engine issue shortly after takeoff”, as well as a ruptured tyre – one of 10 on the Boeing 767-300. It added that the aircraft was “designed to operate on one engine and our pilots are fully trained for this eventuality”.

A passenger took a video from his window seat that he later posted on Twitter, capturing flames:

#AC837 so just at take off there was a huge bang under my seat and then I saw smoke and flames from the left engine. This pic is from a quick video I took and one frame shows the fire for a split second. pic.twitter.com/f67Tp43XI6

Pretty scary to say the least. Especially having to spend 4 hours on this aircraft to burn off the fuel. I guess they were scared to just dump the fuel because of the flames? I’m surprised that the aircraft was that heavy for a Madrid to Toronto flight with just 128 passengers on board.

Here is the flight path of AC837 as per Flightradar24:

Air Canada’s 767’s are my least favorite plane type in their fleet as I’ve taken them a number of times and they are both old and uncomfortable. Interestingly it was also a 767 which had the infamous Gimli Glider incident in 1983 (aircraft pictured above).

Nevertheless thankfully a tragedy was averted here and despite the scary pictures all passengers and crew made it safely on the ground and off the aircraft.