South African Airways (SAA), the troubled flag carrier of the rainbow nation that has been under bankruptcy protection (business rescue) since late 2019, today announced rather drastic route cuts. 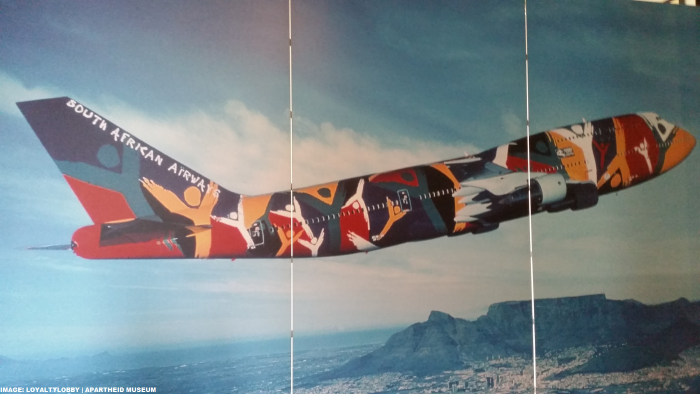 You can access the South African Airways web page for travel information here.

Here are the ceased and retained routes: 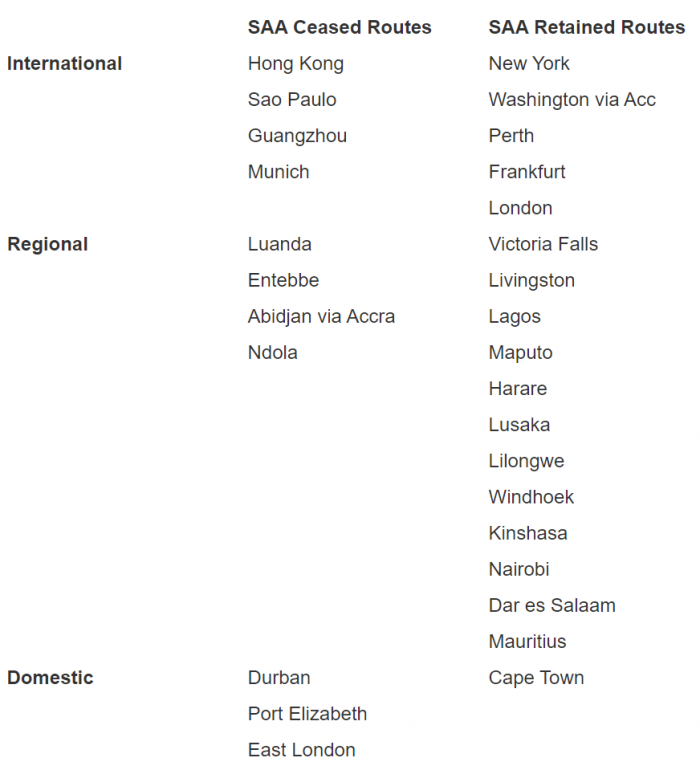 Here’s the announcement from SAA:

The BRPs, Les Matuson and Siviwe Dongwana, have worked closely with key stakeholders including industry specialists, government, creditors and executive management to develop a comprehensive restructuring programme which will culminate in a Business Rescue Plan to be published in late February and subsequently presented to creditors for approval.

In line with SAA’s commitment to take urgent action to conserve cash, and create a viable platform for a successful future, key measures need to be implemented now.

These measures include targeted changes to the route network, deployment of more fuel-efficient aircraft, optimisation of organisational structures and renegotiation of key contracts with suppliers.

“The initiatives we are taking now will strengthen SAA’s business. We believe that this should provide reassurance to our loyal customers that SAA is moving in the right direction. We are focused on our mandate to restore SAA’s commercial health and create an airline that South Africans will be proud of”, commented the BRPs.

Following a careful analysis of SAA’s liquidity challenges and after consultations with all relevant stakeholders, the BRPs have identified which routes will be retained to drive the restructured national carrier towards profitability.

SAA will continue to operate all international services between Johannesburg and Frankfurt, London Heathrow, New York, Perth and Washington via Accra.

On the domestic route network, SAA will continue to serve Cape Town on a reduced basis.

All other domestic destinations, including Durban, East London and Port Elizabeth, will cease to be operated by SAA on 29th February 2020. Domestic routes operated by Mango will not be affected by the changes.

To improve the airline’s liquidity, rationalisation programmes are under consideration for SAA’s subsidiaries, as well as the sale of selected assets. The BRPs will continue to explore viable investment opportunities with potential investors in respect of SAA.

The joint BRPs have stated that every effort is being taken to limit the impact of job losses in SAA and its subsidiaries.

“It is our intention to restructure the business in a manner that we can retain as many jobs as possible. This will help provide a platform to a viable and sustainable future. However, a reduction in the number of employees will unfortunately be necessary”, said Matuson and Dongwana.

The BRPs will engage labour, both organized and non-organized, to reach a solution necessary for a sustainable airline going forward.

The BRPs wish to underline their support of the President’s proclamation for the Special Investigating Unit to examine some of the airline’s contracts. This measure will help in assessing viable agreements and in reducing SAA’s cost base.

The decisions and actions announced today are aimed at improving SAA’s balance sheet, creating a platform for a strong and sustainable airline and ensuring that the company is more attractive for potential strategic equity partners.

These are rather drastic changes. The airline is canceling 11 routes and continues to serve 18. Four of the nine long-haul routes are gone. The only domestic route that the airline continues to fly is Johannesburg – Cape Town, yet on reduced frequencies.

South Africa, including Cape Town, is well served by foreign carriers. Several airlines are competing on domestic routes, too, including Comair, which operates BA franchise and its own Kulula-brand, among others.

I am taking SAA flight from Johannesburg to Cape Town on Friday that is operating, and the only domestic route that the airline plans to serve come March 1. 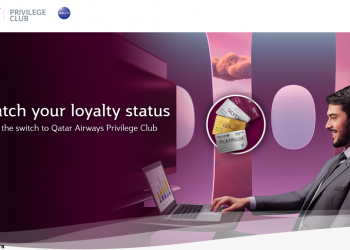 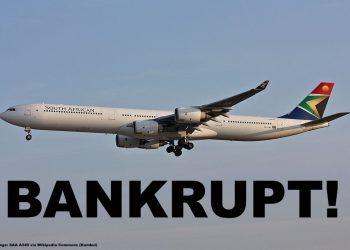 A few days ago I wrote about the possibility of South African Airways going under after the government cut off...

It seems that after years and decades of loss incurring operations, South African Airways has finally hit a dead end...