This week’s Compensation Clinic case comes from a stay I recently had at the ANA InterContinental hotel in Tokyo.

You can access IHG’s page for ANA InterContinental here.

I stayed at this Intercontinental a couple of times and had a couple problems during the previous stay during which we (the FO Manager and myself) agreed that on the next stay an upgrade to a Club Suite would be forthcoming.

I made the reservation and informed the hotel about the previous communication with the manager. Unfortunately upon arrival I was told that no suites were available and the only upgrade could be one of their premier rooms with club access.

Already I wasn’t too happy and at that point I didn’t even realize yet that this room would heat up in the early morning hours like an aquarium in the sun.

During the stay I actually didn’t have many problems apart from the lounge being rather unorganized and children running wild. In the middle of my stay I encountered a broken elevator that suddenly closed while stepping out, the door hit the computer i was carrying and damaged the hull.

Nevertheless the most inconvenient thing was the argument when I was presented the final folio and found a charge for my laundry service (pressing) despite the benefit letter and stamp on the receipt outlining it was complimentary.

I also found a charge to a local toll free number on the bill again despite the letter saying that local calls are complimentary.

I checked out during a weekday after the holidays at which point the GM wasn’t available and the hotel manager was busy so I decided to drop the arguments and filed a complaint with the IHG Ambassador service (very useful for guest issues in my experience).

They forwarded the matter to the hotel manager who then got back to me and apologized. She offered two nights of the stay reimbursed in the form of points to my account. I accepted this: 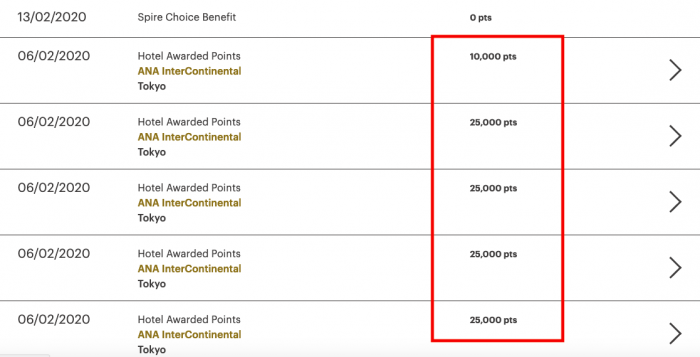 One night at the ANA IC is 55,000 points so 110,000 points in total for two nights. With the two IC’s available in central Tokyo I really prefer the Strings at Shinagawa to be honest. Also very soon the Kimpton will open in Shinjuku.

I didn’t ask for any compensation last time around but with more negative experiences during this stay and the fact that the suite I was promised last time wasn’t available either I felt it was adequate to reimburse two of the four nights. In the future I’ll probably pick another IHG option or continue to stick with Hyatt. Both the Andaz as well as the Grand Hyatt are in immediate proximity to Akasaka.

It’s totally unnecessary to have these folio issues and when there is obviously a legitimate problem then fix it and take the charges off, not argue around with the guest. Flexibility is really not the strong side of the staff at this property.