Thai Airways (TG) will borrow 50 Billion Thai Baht guaranteed by the government to overcome their current financial crisis and will remain a state enterprise, the Finance Ministry announced on Wednesday. 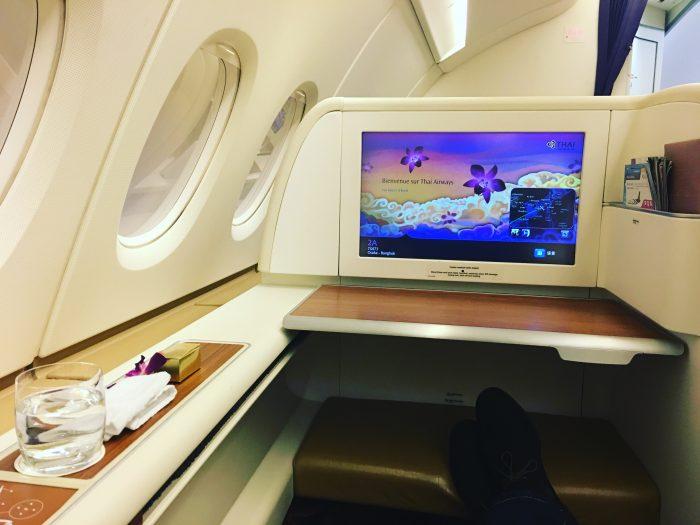 A top level government meeting chaired by the Prime Minister also concluded that aviation and business professionals should be appointed to manage the struggling airline.

The amount of 50 Billion Thai Baht (US$ 1.55 Bln) is sharply below an initial proposal about the total amount of funds needed but at least it has the backing of the Prime Minister which means that it’s all but a formality at this point.

Bangkok Post reported today that there was a lot of back and forth during the meeting to identify the problems and work out a strategy for the future in order to guarantee the survival of Thai Airways.

The financially ailing Thai Airways International is being thrown a lifeline in the form of a bailout loan, finance permanent secretary Prasong Poontaneat said on Wednesday.

The Finance Ministry is expected to guarantee a loan worth 50 billion baht to rescue the national carrier.

The committee, chaired by Prime Minister Prayut Chan-o-cha, assigned a financial consultant to work out a rehabilitation blueprint to be submitted to the THAI board. Central to the plan is the bailout loan to be made available to the airline.

A source at Government House said the Finance Ministry will guarantee the loan until the end of the year.

The amount falls below the original plan for obtaining a 70 billion baht loan. At the same time, THAI will have to negotiate its debts with creditors and adopt cost-cutting measures.

The loan will be disbursed in tranches to spur the airline to stay on track with rehabilitation.

The loan extension depends on the content of the rescue plan and the company’s success in implementing it as well as the bailout conditions, said Mr Prasong. …

The meeting was held to hammer out a solution to the airline’s deep liquidity crunch. The national carrier posted a net loss of 2.11 billion baht in 2017, which widened to 11.6 billion baht in 2018 and 12 billion baht last year, according to Stock Exchange of Thailand (SET) data. THAI’s debt-to-equity ratio rose to 21 in 2019 from 12 in 2018 and 7.8 in the previous year.

Current rules restrict the Finance Ministry from guaranteeing loans to state enterprises that have posted net losses for three consecutive years and are engaged in infrastructure-related business. THAI has seen three straight years of losses, but its business is not classified as infrastructure, said a source. …

Another problem is the longevity of the carrier as the problems don’t just stem from the Coronavirus crisis but are systemic and the airline is in a bad shape for almost a decade.

It was voiced that TG will need a competent management team and to streamline the entire company to guarantee survival.

The meeting also concluded that as a long-serving national carrier, THAI forms an important part of the country’s identity.

The source said that while attendees agreed to take care of the airline’s problems, they insisted there must be a clear change for the better.

A new management team must be brought in to streamline the airline with the immediate priority of shoring up its short-term liquidity problems. The Finance Ministry will be strict in laying down the rescue guidelines for the new management to follow. The team must also coordinate with business allies and sharpen THAI’s all-around competitiveness, the source said.

This has all been said and done before. It’s hard to find an airline that had more CEO’s and Managing Directors than Thai Airways while each of them dived straight into the job and ordered new aircraft. One of the reasons why the carriers has pretty much every aircraft in it’s portfolio, a fact that has driven maintenance costs and was likely lucrative for those top managers at the helm during the time of purchase.

There have been examples when airlines in difficult situations brought in external managers, sometimes even foreigners which is often a problem in companies with a strong national identity. For example there was a strong sentiment when Malaysia Airlines hired first Christoph Mueller and then Peter Bellew as CEO. Both – especially Mueller – were not very well liked as their arrival meant slashing jobs, cutting down corporate structure and promoting a new work culture that actually meant doing jobs efficiently. Needless to say they both didn’t last very long although it’s debatable that the appointment of foreigners to do the “dirty work” was relatively successful in MAS’s case.

Last but not least the Thai refuted the speculation of online sources I also wrote about yesterday that the carriers fleet would be grounded for several more months:

… Meanwhile, THAI has denied rumours on social media that the airline would continue suspending domestic flights by four more months and international flights for one more month from June 1. Soradej Namruangsri, THAI’s executive vice president for operations, said the carrier earlier announced it had grounded flights until the end of May. He said THAI will resume flights as soon as the pandemic subsides and the situation returns to normal.

What does that really mean? Nothing. In fact it could be even worse than the rumor I wrote about yesterday afternoon that Thai’s domestic fleet won’t operate until late October. “Resuming flights” just means that some planes will start operating again and as per the current ticket sales that could be true since international flights can be purchased from July 1 onward. No domestic flights until late October though.

I didn’t doubt for a moment that Thailand would dump it’s prestigious flag carrier which not only is a lifeline for tourism but also serves as a complimentary taxi for government figures and dignitaries in the country. Who would provide that service to these countless “VIPs” if not Thai Airways?

Maybe a management change in the same way Malaysia Airlines did it could be a solution for Thai Airways as well but I have my doubts that the Thais – especially the original junta government – are open minded enough to appoint the foreigner to the CEO position and clean house at TG once and for all.