The Florida based company has entered Chapter 11 proceeding in the U.S. Bankruptcy Courty in Wilmington, Delaware after being unable to meet financial obligations and work out a deal with creditors.

Filing for Chapter 11 is going to allow Hertz to continue operating “as normal” while management works on restructuring the company.

The rental car industry has been hit especially hard these days as the need for renting cars has pretty much evaporated into nothing since travel is down to single digit percentage and people around the world have been under quarantine / stay home advisories for the last few months.

Hertz and other companies meanwhile have lots full of cars which need to be paid for no matter if rented out or not.

Hertz filed for bankruptcy protection Friday, unable to withstand the coronavirus pandemic that has crippled global travel and with it, the heavily indebted 102-year-old car rental company’s business.

The Estero, Florida-based company’s lenders were unwilling to grant it another extension on its auto lease debt payments past a Friday deadline, triggering the filing in U.S. Bankruptcy Court in Delaware. Hertz and its subsidiaries will continue to operate, according to a release from the company.

By the end of March, Hertz Global Holdings Inc. had racked up $18.7 billion in debt with only $1 billion of available cash.

Starting in mid-March, the company — whose car-rental brands also include Dollar and Thrifty — lost all revenue when travel shut down due to the novel coronavirus, and it started missing payments in April. Hertz has also been plagued by management upheaval, naming its fourth CEO in six years on May 18.

“No business is built for zero revenue,” former CEO Kathryn Marinello said on the company’s first-quarter earnings conference call May 12. “There’s only so long that companies’ reserves will carry them.” …

On May 18, Hertz took the unusual step of naming operations chief Paul Stone as CEO and announced that Marinello would step down as CEO and from the company’s board. Mazari called the change unusual just days before a potential bankruptcy filing. He also noted that CEO changes have been common at Hertz since financier Carl Icahn entered the company in 2014. Icahn’s holding company is Hertz’s largest shareholder [with a 38.9 percent stake in the company].

The debt to cash ratio in Hertz case is pretty much a death sentence and likely one of the reasons why creditors didn’t see themselves in any position to grant further deadlines or be unable to refinance any outstanding debt of the company.

If you compare the situation with an airline like for example Lufthansa who needs a bailout of 9 Billion Euro but has substantial cash reserves (although that’s going to evaporate in due refunds) and also owns a large fleet of aircraft. Hertz has a recognizable brand name but do they really own anything except some locations which includes buildings and land? Of course the brand itself is highly valuable.

You can find Hertz financials on Marketwatch (access here) which also lists their assets, both tangible and intangible: 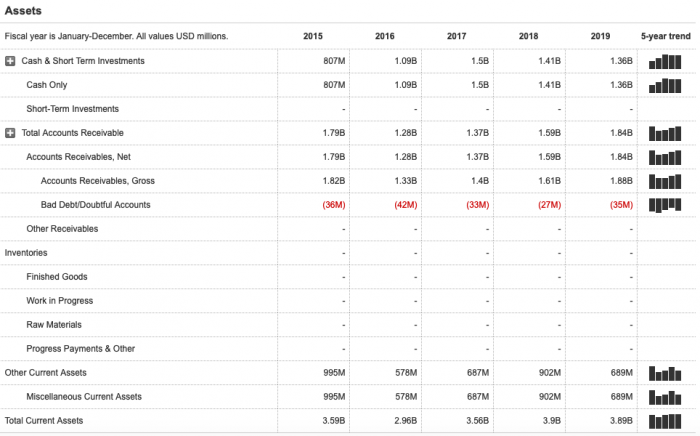 Nevertheless the bankruptcy court untangle all this and find a way forward. As I have previously said I don’t believe that Hertz is a company that will go away considering it’s standing in the industry. Then again many if not most would have said that about Lehman back in the day too.

Hertz wasn’t able to access any of the bailout money laid out by the government last month and the way that the federal bailout program works doesn’t seem very fair to me. A lot of companies have been in the spotlight during the past few weeks for applying and receiving bailout money yet a company such as Hertz apparently isn’t eligible? At the same time the government is throwing Billions after airlines and that’s just for starters.

But should a company with $18.7 billion in debt be eligible for any of this money or has that ship sailed long ago and Covid-19 was just the last drop in the barrel?

I like Hertz for rentals in the U.S. market and have stuck to them for the last 15 years as Presidents Circle. I just never got the feel for AVIS for even National, however I tend to prefer Sixt these days where available.

The creditors are going to have to take a substantial haircut in this process and will probably end up with dimes if not with pennies on the dollar.If you look at what Hertz actually owns there isn’t much to extract money from and lets keep in mind this is a Chapter 11 so there won’t be a fire sale of the assets, many of which are Hertz actual rental locations (lots and buildings).

A large part of the debt stems from lease payments for the cars and looking ahead the automotive industry (especially Ford) will need Hertz to stay alive in order to dump a huge bulk of cars into their system every month. Who else would take that amount of cars in the U.S., the consumers who just face another recession? I’m curious about the competition because although some analysts said AVIS is healthy and can survive this there are plenty of shaky players in the market.

IHG Third Night Free Select Southeast US Markets Through July 31, 2020 (Book By May 28)

Hertz Gold Plus back in May 2021 extended elite tiers through January 31, 2022. Now, points expiry has been waived...

Hertz has launched a new offer to get its Gold Plus Rewards Five Star or President's Circle members to gift...

Since early 2019 Hertz and CLEAR engaged in a partnership allowing Hertz Rewards status customers to benefit from a complimentary...