The Nevada Governor has informed the Gaming Control Board that he is confident about reopening the state and therefore the city of Las Vegas on June 4th, 2020. 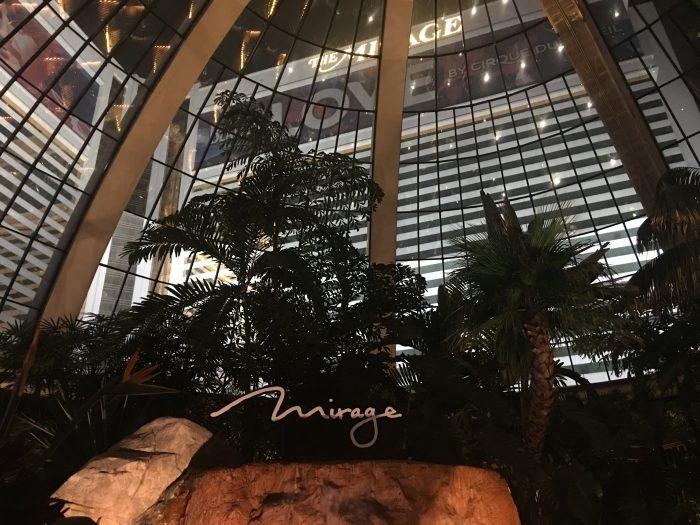 With life returning to the city, owners and operators of Casino Hotels and Resorts are now working on a schedule which properties to reopen and which will stay closed for now.

Las Vegas has been dark for it’s first time in history since mid March and the city has prepared to re-open their vast businesses including Casinos where visitors will notice significant changes.

In an unprecedented step of emergency measures Nevada’s Governor has announced that effective March 17th all nonessential businesses in Nevada are to be closed, resulting in Las Vegas’ first ever shut down.

Las Vegas since it’s inception has pretty much maintained a 24/7-365 operation with some disturbances such as union strikes and even winter storms along the way but a complete shutdown is unprecedented and shows how hard the times are.

Now the Governor announced that Las Vegas will be back effective June 4th, 2020.

According to a report on Fox 5 Las Vegas (access here) only a few hotels and casinos will open for now.

Additionally, according to a news release, Caesars Entertainment anticipates that several retail and dining outlets along The LINQ Promenade, as well as the High Roller Observation Wheel, will reopen.

Both Caesars Palace and the Flamingo will offer lodging, dining options and access to their outdoor pools, as well as slot machines and table games, the release says. …

At opening, according to a news release, amenities at all properties will be limited. “As demand for the destination builds, additional venues within these resorts will open and other MGM Resorts properties on the Strip will reopen,” the release said. …

“We are ready to provide our guests with a full Las Vegas experience with a collection of luxury amenities and unmatched service,” said Wynn Resorts CEO Matt Maddox. “At the same time, our extensive Health & Safety Plan, validated by the nation’s leading public health experts, will enable a safe environment for our guests. The entire Wynn team is looking forward to welcoming our guests back.”

Both casinos floors were expected to reopen as well.

The properties that will open June 4 include:

“We are excited for the opportunity to resume operations in our home state of Nevada,” Boyd Gaming CEO Keith Smith said in a statement. “By the first week of June, we look forward to having 19 of our 29 properties across the country back in operation, and we are optimistic that we will be able to reopen most of our remaining properties by the end of June.”

Not all amenities will reopen on June 4. Buffets, movie theaters, spas, fitness centers and showrooms will stay closed at Boyd Gaming properties during the initial phase of reopening.

It remains to be seen how much of the strip will really be open in the first few weeks. What about all the retail shops and restaurants? How much business is there really going to be along the strip and downtown Las Vegas in the next few months? 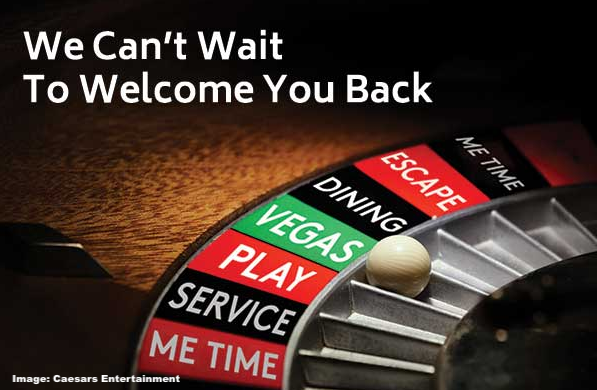 The two gaming giants Caesars Entertainment as well as MGM have also sent out emails to their customers, outlining a bit of what they’re planning to do in the re-opening phase.

Hello from sunny Las Vegas! We hope that this email finds you and your loved ones doing well.

We are happy to announce that Caesars Entertainment plans to reopen some of our spectacular Las Vegas resorts and casinos on June 4.

When we open, some things will not be the same as they were before we closed, but the welcoming spirit of the hospitable team here has not changed, and we are determined as ever to deliver a fun environment with the same level of friendly service you’ve come to expect from us.

When we reopen you can expect the following enhancements and benefits:

Upon reopening, our team will comply with directives issued by the Nevada Gaming Control Board, Governor Steve Sisolak and public health authorities, and we have been working hard making enhancements to the property. We have rearranged slot machine banks to allow for appropriate social distancing, and fewer seats will allow for better spacing at table games.

All hospitality offerings, including entertainment, restaurants, bars, spas, salons and retail stores are expected to be reopened on a phased basis with reduced capacity to allow for proper social distancing.

I was wondering the most about the food & beverage outlets in Las Vegas, especially the future of the omnipresent Las Vegas Buffets. There was a good article from Vegas Eater the other day which I can recommend if you’re interested about all things food in Vegas.

MGM writes about F&B in their 7 Point Safety Plan:

Food & Beverage: Digital menus will be available to view on personal mobile devices via QR code. Virtual queues will be in place for guests when immediate seating is unavailable. Guests will receive a text message notification when their table is ready.

There are some graphics prepared by MGM how things are supposed to work: 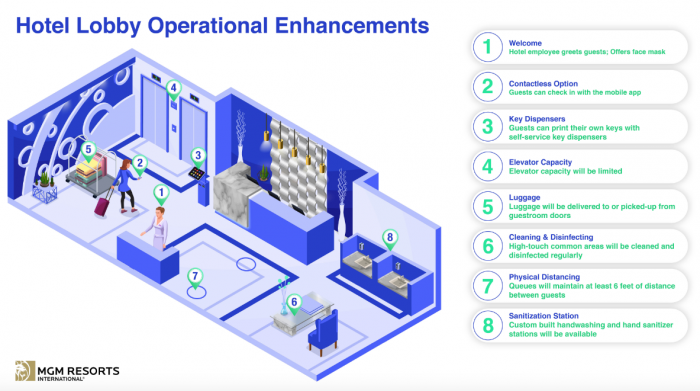 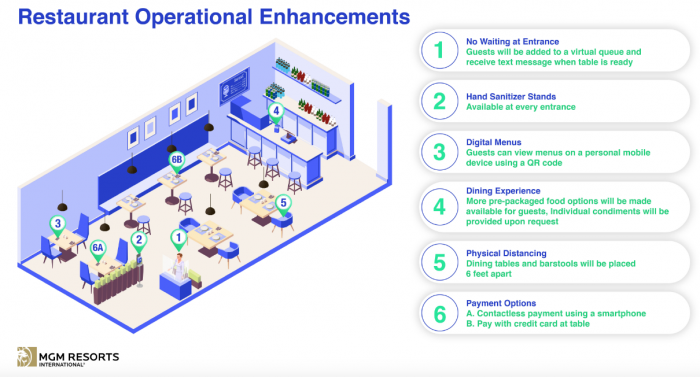 The graphic however looks like a cute little Ma & Pop shop not a giant Vegas Casino Resort. I’d be highly surprised if it’ll look anywhere near this when June 4th comes around.

MGM writes about the operations of their hotels:

A glimpse at what guests can expect:

Bellagio’s Conservatory will open with a beautiful new Japanese Spring Garden display called “Japan Journey: Magic of Kansai”. The resort’s iconic fountains will once again come to life. Food & Beverage amenities will include a variety of lounges such as Petrossian Bar, featuring its signature pianist as well as casual and fine-dining restaurants like Prime and Lago. The Mayfair Supper Club, which opened only a few months ago to rave reviews, will also reopen its doors. The lush pool will open with a selection of cabanas available. The Salon and Fitness Center also will be available.

In addition to a variety of bars and dining offerings including the lively Tom’s Urban, New York-New York guests can enjoy the highly popular Big Apple Roller Coaster and Big Apple Arcade, as well as Hershey’s Chocolate World. Just in time for celebrating summer, the pool will open with a selection of cabanas available. The property’s Fitness Center will be available to hotel guests. Many of the venues at the adjacent Park are slated to open, as well.

MGM Grand and The Signature

MGM Grand, known for its dynamic mix of offerings, will open a number of bars and lounges as well as casual and fine-dining venues including Craftsteak and Wolfgang Puck Bar & Grill. A selection of cabanas will be available alongside a portion of the resort’s exciting pool environment. The Salon and Fitness Center will be available to hotel guests. The Signature at MGM Grand also will open with a variety of its amenities available. Days and hours of operation at all venues will vary.

Pools are big in Las Vegas, especially during the summer. I’m glad those are among the things open for customers.

As I mentioned last time room rates will likely come down significantly in the next year or so which might be a good opportunity to pay Vegas a visit if circumstances allow.

I don’t expect the convention business to rebound anytime soon, reason for that being a combination of the distancing measures, travel cutbacks and overall fears of a recession that have an impact on the budget for training and marketing. Lavish Las Vegas trips will likely be on the back burner for some time to come, same as post 2008 which really put a dent in the city.