Thai Airways International has postponed all of their international flights for yet another month and won’t operate any international routes before August 1st at the earliest. 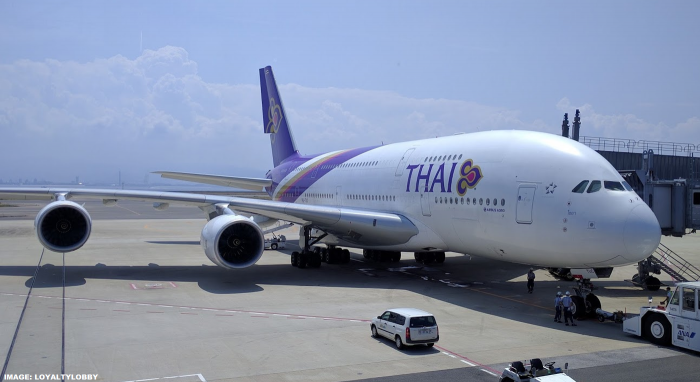 The airline had initially planned to restart their overseas flights on July 1st but since the country is still pretty much in isolation with the borders closed to tourists it doesn’t seem viable for them to operate.

This creates a new problem as Thai has sold tickets for the entire July throughout the last month and people were getting ready to travel and leave Thailand in light of the government mandated visa amnesty which ends on July 31, 2020.

Thai Airways hasn’t published any announcement of this yet but there was a write up from The Taiger this morning.

Thai Airways, with more problems than most airlines at the moment, has pushed back its resumption of international services from the start of July to August. Maybe the flight schedulers know something the rest of us don’t….?

The Civil Aviation Authority of Thailand has pushed back the resumption of international flights twice already. The current ban will finish on June 30. But there has been no official update on what will happen after June. Now Thai Airways is adjusting its planned flight resumption for flights to Europe out of Bangkok, changing the launch dates for its London and Paris services.

Published in Airlineroute, the planned London and Paris services of Thai Airways are now due to resume in August rather than previously reported in July. …

I checked the various city pairs sold on Thai Airways website and indeed the first date available for these connections is now August 1st: 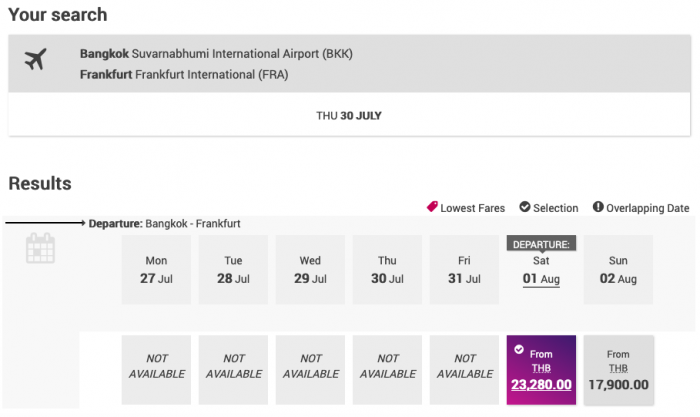 This is double problematic for those customers who have booked THAI for flights from July 1st as previously available since the carrier is now bankrupt and has announced they can no longer refund any tickets for at least six months.

Meanwhile the Bangkok Post reported that the airline has appointed a new chairman and pushed through restrictions on staff benefits such as annual leave, overtime payments and pension contributions.

A source in THAI, meanwhile, revealed that a number of THAI staff members were drumming up support for their bid to petition the Labour Ministry against the company’s decision last Thursday to issue a new set of work rules and regulations, which has downgraded their fringe benefits.

According to these THAI workers, the work benefits were changed from the standard level to the minimum.

The total number of annual leave days is now limited to only six days from between six and 24 days previously depending on the number of years of service, said the source.

The overtime work pay rates and the rates of the company’s contribution to the Provident Fund were also lowered, said the source.

“These changes to the employment conditions are unfair and have made many employees frustrated. They are therefore gathering the signatures of those who support a move against the changes,” said the source.

Thai Airways employees and especially cabin crew has been living extraordinarily well off the airline while it was led like a giant welfare operation for management, staff and those entitled to free flights.

Airlines everywhere have to downsize and cut back so naturally this includes reductions in staff benefits as well. The problem starts when you pretty much banked on THAI as a state enterprise will never get into a bankruptcy situation and therefore the gravy train continues endlessly. This scenario didn’t hold true as Thai Airways lost it’s state enterprise status following a sale of some shares and now it’s under debt rehabilitation in Thai Bankruptcy Court.

So not only does TG have to battle with their financial woes but now they are short of having an employee revolt on their hands. The perfect storm!

The fate of THAI will also depend on how soon Thailand will open up the country to tourism again. Since last weekend it’s now possible for Expats on work permits to return to Thailand provided they are obtaining a clearance certificate of their local Thai Embassy and subject to Alternative State Quarantine (ASQ) at various hotel in Bangkok for two weeks. The cost for this ranges between THB 40,000-50,000 for accommodation, meals, health checks and a secure transfer to the facility.

I wonder if the Thai government will extend the visa amnesty for foreigners still in the country if Thai Airways remains grounded for much longer. One of the reasons for granting an automated extension to tourist visas was that many had Thai Airways tickets but were unable to leave after TG shut down operations.

While THAI has restarted some domestic flight operations with Thai Smile the international flights remain in limbo and I wouldn’t even give all too much on the August 1 date at this point. Booking anything with THAI right now is pretty much a gamble I’m not willing to take myself except with miles of another frequent flyer program that can be easily cancelled/refunded.

Who would voluntarily book flights with an airline that has already admitted it won’t refund your money for at least six months if push comes to shove?