Last week there was a discussion in Thailand regarding their “Travel Bubble” project that would allow foreigners back into the country without undergoing quarantine, however the initial plan was rejected.

Now their health experts have worked out a new proposal that includes seven categories of travelers which would be allowed back to Thailand including tourists from China, Japan and South Korea.

According to media reports and voices from authorities the initiative was seeking to restart allowing business people from select countries into the country to get commerce back on it’s feet but a lack of quarantine regulations made this a no-go for the countries COVID-19 task force.

As The Nation now reports the new proposal has a certain amount of slots for each category which can be filled.

The first four groups are related to residents, workers and those seeking medical treatment:

The governments policy to keep families separated has caused an uproar in the country as many Thai nationals have foreign spouses and in this situation many of the foreigners were stranded abroad when Thailand suddenly closed their borders. These families – many with children – have been separated for three months now.

A similar issue arose with work permit holders and even permanent residents. All these months people who have full households in Thailand have been unable to go back home although those on work permits were able to start returning to Thailand for roughly 2-3 weeks now after applying for a permit through the local Thai Embassy and state quarantine upon arrival.

What is concerning travelers most is the category of temporary visitors: 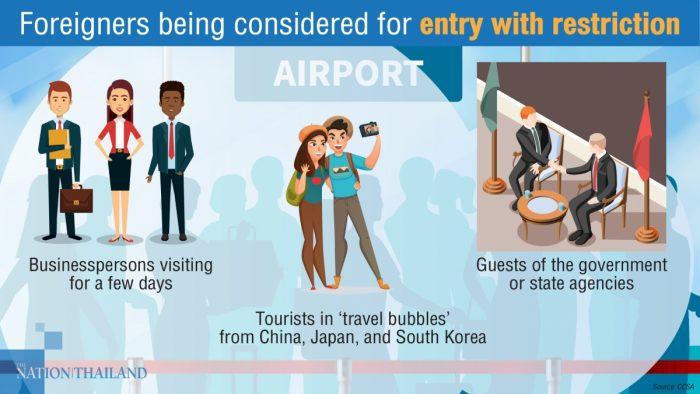 As the Nation writes in their article:

The other group comprises travellers who won’t need to go into quarantine on entry:

1. Businessman on short-duration stays, including those coming into the country for business discussions. This group might need a specific area and intense screening both before travel and at arrival at airports. Considered a “power group”, these are entrepreneurs who will visit the country to sign business contracts or inspect sites or factories, which is essential to the economy.

2. Government guests who are invited for ceremonies or specific seminars.

3. Tourists under the travel bubble. Dr Taweesin said that the target countries are China, Japan and South Korea, which are presently trying to contain the virus.

The CCSA aims to discuss the issue in depth with the Cabinet after finalising the details.

They must be joking. Never mind that China just had a major new outbreak in Beijing and was the source of the first wave of infections in January/February of this year. Apparently the Thai government still hasn’t learned it’s lesson. Not sure what “presently trying to contain the virus” is supposed to mean as I’m sure that’s the objective of every single country on this planet.

I’m surprised this even received consideration as the original plan last week was immediately rejected based on safety concerns due to lack of quarantine rules. Mind you this proposal has still to be discussed and ultimately sanctioned by the cabinet and Prime Ministers office.

There are of course economic consideration at play here. Thailand’s tourism industry has been decimated and the healthcare industry is also important for the country as Thai hospitals are very popular for medical treatment, in particular with patients from the Middle East as well as wealthy individuals from surrounding countries in ASEAN.

In how far it’ll be possible to lure travelers from abroad will depend on the procedures not only upon arrival in Thailand but also upon return back in their home countries. Currently both Japan and Korea require a 14 day isolation when returning from abroad. This would defeat the purpose of tourism entirely especially since both of these countries are notorious for their lack of annual leave. A regular employee couldn’t just go for holiday and then stay at home for a further two weeks so unless this gets waived there is no way it’ll work out.