Since early 2019 Hertz and CLEAR engaged in a partnership allowing Hertz Rewards status customers to benefit from a complimentary premium security trial and using CLEAR technology to facilitate a fast lane at select Hertz locations. 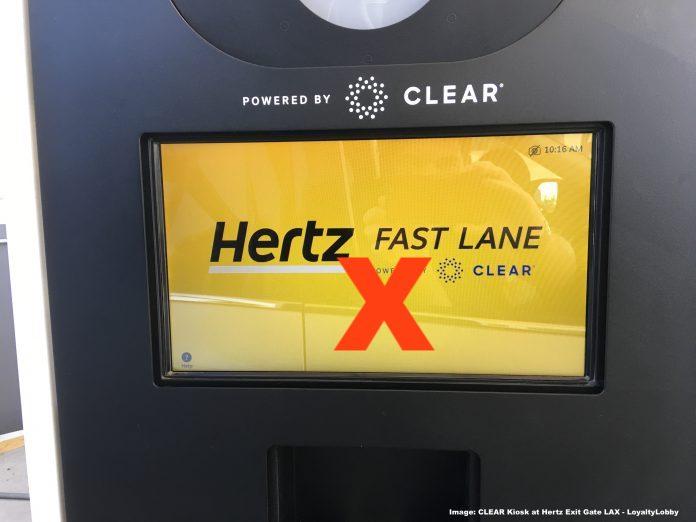 This partnership has now come to an end according to a very simple email sent out by Hertz last night which means both the fast lanes as well as the discounts for CLEAR are no longer available.

I have previously covered CLEAR on several occasions including the former partnership with Delta and the new cooperation with United Mileage Plus whose members now enjoy preferential pricing.

What this partnership does is basically using CLEAR technology to check the drivers license of the customer as ID requirement to leave the facility quickly, scanning biometrics of the registered member.

The partnership has first been announced back in December 2018 (access press release here) and since them CLEAR has equipped several Hertz stations with equipment and also staff to help customers with the registration.

This has now come to an abrupt end according to a Hertz email yesterday:

There wasn’t any warning that the partnership would suddenly cease and even on the CLEAR news page no announcement is given as of right now that it’s no longer available.

I have actually used the CLEAR kiosk at the Hertz LAX station to sign up for the service (access my article about this from last year here).

Since then I’ve already untangled my CLEAR account from Hertz and tied it with United where a new partnership is available at $109 for status customers and I have used the new Amex Green Card $100 credit for CLEAR to extend my membership.

I haven’t been to the U.S. since last October so I can’t comment on recent rental experiences with the company but I might have another go at them in Germany later this month. Of course the CLEAR partnership extended to U.S. locations only.

It’s unclear who took the initiative here, if it was Hertz who cancelled the agreement to save costs or CLEAR who kicked Hertz to the curb because of (potentially) unpaid bills.

At the airport I’ve been pretty happy with CLEAR when it was actually available. As far as Hertz exit gates were concerned I’m not sure there was actually a lot of benefit to it, especially as a Presidents Circle or Five Star member.

I’m sure that Hertz had an agreement with CLEAR to actually pay them for the technology which includes terminals, maintenance, memberships and also staff required to attend to these machines in order to help people signing up (although these were probably Hertz employees). Given the financial situation and recent Chapter 11 filing of Hertz I can just imagine that CLEAR has now become yet another Hertz creditor and the best they can do is retrieve their terminals from the locations where they have been previously deployed to.