We’re back with another case from the Compensation Clinic and this time it concerns Lufthansa in a case where the passenger had to purchase an expensive replacement ticket from New Delhi after the airline stopped all flights.

Remember that you can always email us, send a message via Facebook or use Twitter and include photos too. We’ll try to cover a new Compensation Clinic case here from time to time.

Since the Covid-19 cases started rising in March Lufthansa started to voluntarily cut down their schedule to the point of where they stopped flying to certain destinations entirely.

A good friend of mine traveled from Germany to India in early January and planned to stay for three months, having booked his flights with a Lufthansa Miles&More mileage ticket in Business Class.

I phoned Lufthansa for him to request a proper rebooking to an alternate connection either via Mumbai or direct on another carrier. Lufthansa refused to process any rebooking of the mileage ticket to a regular revenue based connection. They also refused to instantly process the mileage refund to book another connection ourselves. In other words absolutely deplorable customer service.

As a result of that I put the phone agent on notice that we would purchase a revenue ticket and pursue the reimbursement of the full cost later on and sent the same through email to Lufthansa Customer Relations. As there was no reply to that inquiry for the next 36 hours (not that I really expected one) I found a flight in Business Class on Etihad from Delhi to Frankfurt:

The price was considerable:

This was the last flight out of Delhi as a few hours later the flight ban started and India instituted a nationwide lockdown which was more or less enforced depending on the region.

Since Etihad also has a much lower baggage allowance in Business Class (40kg) compared to Lufthansa (2x32kg) he had to pay US$252 for excess baggage:

Overall the expenses for replacement flight and excess baggage came to US$3,740 or 3,400 Euro.

Following the flight I claimed this to customer relations and also asked about status of the refund of the mileage ticket back to the original account, respectively telling Lufthansa that they could keep the miles and taxes paid in exchange for the full reimbursement of all expenses since the airline refused any sort of rebooking assistance after voluntarily cutting their flight schedule.

The first reply that came back from Lufthansa wasn’t in any way satisfactory as it didn’t even touch the issues or claims I included.

I immediately (within a month) started a claim with the Ombudsman in Germany, the Schlichtungsstelle fuer Personenverkehr that I wrote about a couple times previously. I figured the earlier to get a claim in with them the better as they will likely be flooded with claims during the Corona period.

Two months later this claim was processed and I was actually surprised about the speed as not too long ago the Ombudsman was backlogged for a whole year due to Lufthansa strikes. Initially they had closed the mediation because Lufthansa claimed this was a business trip which isn’t eligible for the mediation process. I refuted this claim, this was a personal trip without any indication that it’s work related.

Following this, I received an email from them a week later that Lufthansa Is willing to pay out 3,300 EUR to the account quoted in the complaint. 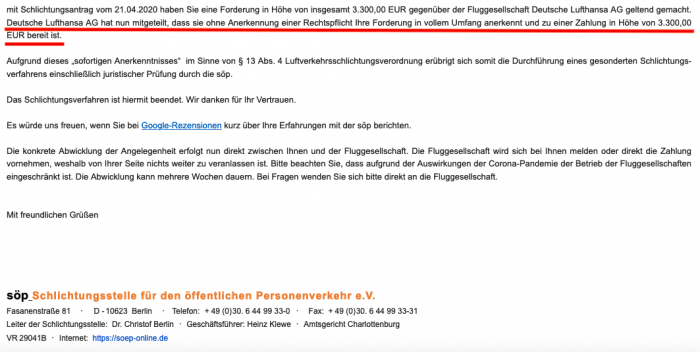 It says that the miles will be returned to the original account and taxes for the return segments refunded to the credit card.

They will also transfer 3,059 Euro to the checking account. I did inform them in a reply to this that we already initiated a chargeback in regards to the taxes and that it has been completed. As such no refund of taxes is required and they can also withhold the amount of taxes for the flight from Germany to India. I also asked for clarification about the amounts as they don’t really add up compared to the original claim. So far no reply to that.

Lufthansa had ample opportunity to help the passenger out and rebook the ticket to another carrier at a much lower cost rather than having the passenger purchase a ticket at retail price. Airlines pay a lot less (internal fares) when rebooking passengers to other carriers due to irregular operations . They refused to do so and now have to live with the expensive consequences.

Airlines are required to fulfill their duty of care and at least back in March there hasn’t been any official directive yet that indemnified the airlines from their duties to rebook passengers.

There were plenty of people stranded in India due to Lufthansa Groups decision to stop all flights while other airlines such as BA, Etihad etc were still flying until the flight ban came into effect. As a result the German Government had to repatriate a lot more people that it would have been the case under normal circumstances.

My friend was able to afford a Business Class ticket so it wasn’t a big deal for him to advance almost US$4000 but many others aren’t in that position. At least Lufthansa agreed to the reimbursement through mediation instead of having to go to court.