Thailand’s Visa Amnesty For Visitors Is Running Out, Immigration And Embassies Advising Foreigners To Prepare For Departure

Thailand had a very generous visa amnesty for foreigners in place that saw themselves unable to return to their home countries due to lack of flight options or deterioration COVID situations back home. 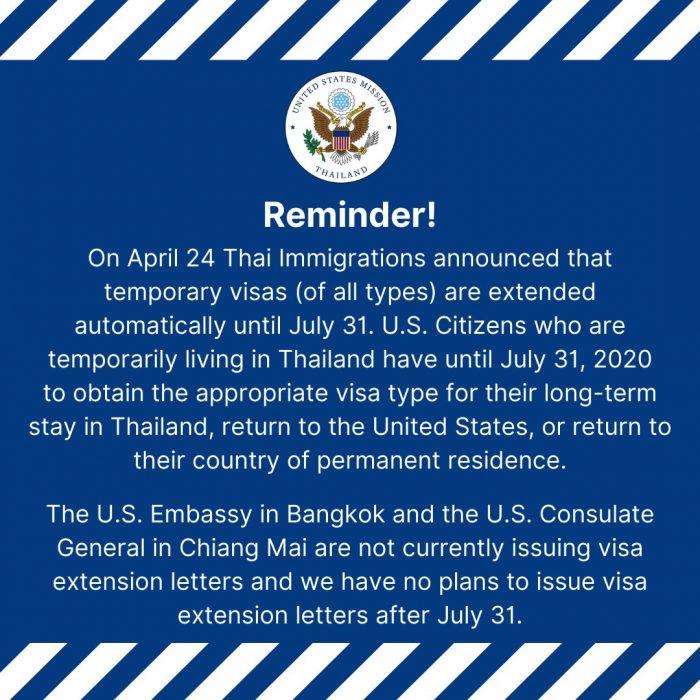 This amnesty is now about to run out on July 31st and in the last couple of days both Thai Immigration as well as the embassies in Bangkok have been telling foreigners it’s time to prepare for their departure or avail themselves to a visa extension if eligible.

South East Asia is very popular with visitors from all over the world and when the Covid-19 hit it’s peak in March/April many countries including Indonesia and Thailand eventually decided for a general visa amnesty that allowed foreign visitors on tourist visas to stay in the country for a given period.

As far as Thailand is concerned the limitation has always been July 31, 2020 which is coming up roughly two weeks from now.

While there has been some discussion about a possible extension of this already very generous timeline it appears that the goodwill is running out and the Thai Government would like to see these long term tourists return home.

There have been announcements made by the individual embassies as well, warning their citizens that they should either plan for their departure or avail themselves to a proper visa allowing them to stay.

Here are some tweets from embassies in Bangkok such as the U.S. Embassy (ACS Unit):

Should I stay or should I go? #Thailand has not clarified plans to continue the visa amnesty past July 31. You should begin planning your next move now. See our guidance below. Enroll in STEP for updates: https://t.co/g9NQ0F7HQ1. pic.twitter.com/f7mrhBk80e

The Embassy of Germany:

Thailand does have a visa extension process in place that allows tourists to extend their visas once for a fee of 1900 Baht, however there seem to be new regulations in the current situation requiring the embassy to attest that it’s currently not possible to take a flight home due to lack of flight options.

Due to the fact that there are (and have been for quite some time) daily flight connections out of Bangkok on airlines such as Air France, EVA Air, KLM, Korean Air, Lufthansa and Qatar Airways, embassies can’t issue these documents and as such visa extensions will be difficult or impossible.

Tickets on various airlines right now are available to most destinations and prices are reasonable. It’s even possible to book seats using miles and points. It’s probably recommendable to make arrangements for a timely departure while it’s still convenient and economical.

If you like up to date information about this situation I suggest you follow Richard Barrow who has always a great and comprehensive feed about news in Thailand, especially about this current immigration situation. Richard has been around for a long time and is equipped with good connections to both Thai Immigration and sources at embassies.

Foreigners looking to remain in the country should familiarize themselves with the legal consequences they could face as result of an overstay.

It’s my personal opinion (and really just that) that foreigners who benefited from this visa amnesty for now 3+ months shouldn’t overstay their welcome. There have been continuous flights that allowed foreigners to leave on their own accord plus numerous repatriation flights organized by the embassies. The vast majority of people still in the country are there because they want to stay, not because they can’t go home. I do realize that the situation in some countries especially the U.S. doesn’t look all that enticing to go back to but in the end of the day there are immigration laws in place we have to abide by as visitors.

If one has the financial resources it’s possible to apply for the Thailand Elite Visa which is available at a price of 500,000 Baht for 5 years (currently with a six months extra validity as a special promotion). This can be processed while already in the country but of course 500k aren’t pocket change unless you really plan to spend the next five years in Thailand. Under those circumstances it’s actually a decent deal.