There is often a range of speculation how much hotels get reimbursed from their respective loyalty programs when a member uses the saved up points for a free night award and today we’ll have a look at IHG Rewards Club.

Reimbursements for points bookings are structured by the revenue class of the hotel but also depend on the occupancy of the property during the time of stay.

IHG hotels must make 5% of their room inventory available as awards. This is not tied to standard room availability. There could be standard rooms available for sale but no award rooms. This is a system that deviates from other chains such as World of Hyatt and Marriott Bonvoy where you can book pretty much any standard room that is for sale on the basic points rate.

How much do IHG hotels get reimbursed for award stays?

The app (currently) shows reimbursement amounts even on points stays although they aren’t always correct. Here are three examples:

Two nights at the Holiday Inn Pattaya, reimbursement $8.70 per night (? – this can’t be right). 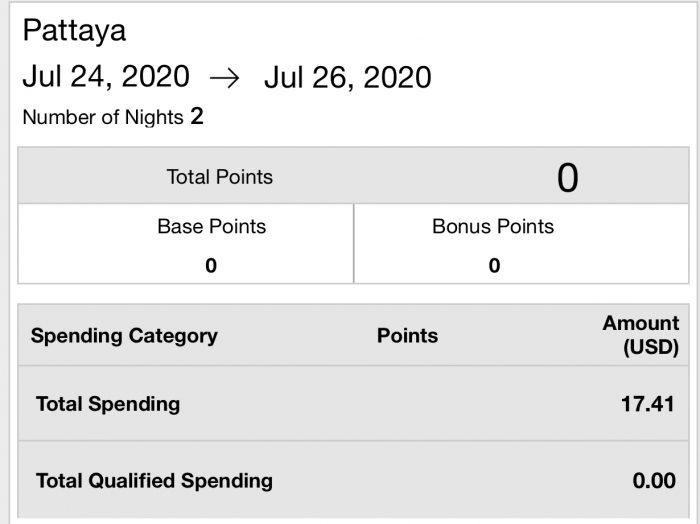 Three nights at the Intercontinental Pattaya, reimbursement $41.82 per night.

With the exception of the rate at Holiday Inn Pattaya these amounts seem about right and are in line with the official scale of IHG’s award stay reimbursement process:

Based on this chart the minimum amount a hotel should receive for an award room is US$25 per night which is barely enough to cover operational costs at most hotels. This leads me to believe that the amount quoted above for the Holiday Inn Pattaya isn’t accurate. A hotel couldn’t operate at such low reimbursements, let alone provide amenities.

This rate is usually static no matter how many points the member uses, be it a fix amount or a reduced amount due to the old point breaks system or the currently floating points rates.

IHG Rewards Club does have a higher rate for hotels that accommodate a greater number of redemptions. Incentive rate kicks in after 1,000 award nights or total of 2% of annualized room inventory has been consumed as awards:

At the same time an elite member staying on points should be shy to ask for a nice room or even a suite when checking in during an extremely busy day because if the hotel crosses that magic line they will be paid handsomely even for this points stay. In fact most good hotels already upgrade their top tiers in advance due to this.

There is a big incentive for hotels to push their occupancy in order to reach a higher reimbursement level for the award stays in house on the particular day. These efforts should of course be legal such as selling more rooms at a discount and not through fraudulent means such as in the Parker case.