Thai Airways has announced that it will operate another five “special flights” to the UK & Germany in September to repatriate passengers while their international fleet remains grounded.

Thai has also announced that passengers can use existing ticket coupons and credits from previously cancelled flights as well as Royal Orchid Plus miles for these flights.

The prices for these flights advertised from Bangkok to London are rather reasonable in Economy Class, but Business Class seating is rather steep.

Thai also operates another flight to Copenhagen on August 30th which is 5 days from today just in case someone wants to fly on short notice.

This offer popped up in a local Expat Facebook Group and indeed TG is starting to put their fleet up in the air to at least some good use although the motivating behind this might be twofold. 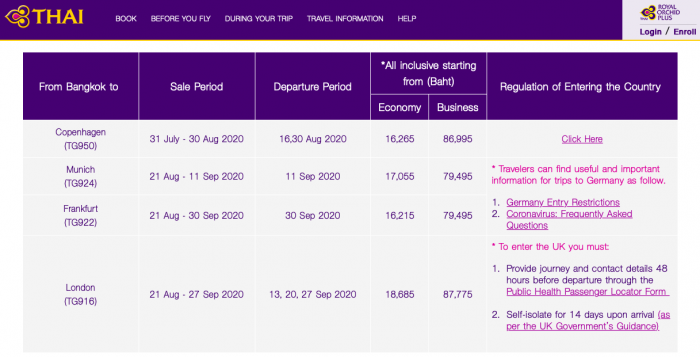 THAI Airways adds the following information to this selection:

The one way price for Economy Class is US$550 which is reasonable but Business Class costs US$2920 which is steeply above the usual market value on this route. That’s double than what Lufthansa asks for their Bangkok – Frankfurt on an almost daily basis. Lufthansa tickets are available for destinations all over Europe for ~ US$1700 one way.

The lack of direct flight options has served as a reason for many “stuck” in Thailand not to return home to the UK. I have a feeling that with the extension of the visa amnesty for foreigners in Thailand until September 26th the government wants more foreigners out of the country. At the same time these flights are used to pick up Thai nationals and those other groups of foreigners allowed to return to Thailand  from abroad.

I wish their pricing for Business Class was a little bit more “based” but at least this time around they allow passengers to use existing tickets and credits from the flights that got cancelled in the past. Royal Orchid Plus mileage bookings are also possible. I wasn’t able to find any availability through other Star Alliance programs.

Choice Privileges Targeted Bonus Offer For A Stay By October 31, 2020