Thailand had a very generous visa amnesty for foreigners in place that saw themselves unable to return to their home countries due to lack of flight options or deteriorating COVID situations back home.

This amnesty is now about to run out on Saturday, September 26th and in the last couple of days both Thai Immigration as well as the embassies in Bangkok have been telling foreigners it’s time to prepare for their departure or avail themselves to a visa extension if eligible.

South East Asia is generally very popular with visitors from all over the world and when the Covid-19 hit it’s first peak in March/April many countries including Indonesia and Thailand eventually decided for a general visa amnesty that allowed foreign visitors on tourist visas to stay in the country for a given period.

As far as Thailand is concerned the amnesty has previously been extended from July 31, 2020 to September 26, 2020 which is coming up this weekend .

It appears that the goodwill is running out and the Thai Government would like to see these long term tourists return home while at the same time struggling to formulate a process to open their borders to new tourists to help the faltering tourism industry back on it’s feet. A strange process to say the least.

There have been announcements made by the individual embassies as well, warning their citizens that they should either plan for their departure or avail themselves to a proper visa or extension thereof allowing them to stay which currently requires a letter from the embassy seeking support of the Thai authorities.

So far only the U.S. Embassy has been providing these letters without conditions for their citizens while others attach conditions to the issuance.

Some missions like the German Embassy have consistently refused to provide support letters but had a change of policy on Monday afternoon when the Ambassador tweeted this video:

Basically after refusing to do anything they decided 4 business days before end of the amnesty to issue support letters for those currently holding existing (expiring) long term visas for Thailand or have their place of residence in a third country to which they currently can’t return.

Due to the fact that there are (and have been for quite some time) daily flight connections out of Bangkok on airlines such as Air France, EVA Air, KLM, Korean Air, Lufthansa and Qatar Airways, embassies in most cases still refuse to issue these documents and as such visa extensions will be difficult or impossible.

Tickets on various airlines right now are available to most destinations and prices are reasonable. It’s even possible to book seats using miles and points. It’s probably recommendable to make arrangements for a timely departure while it’s still convenient and economical.

If you like up to date information about this situation I suggest you follow Richard Barrow who has always a great and comprehensive feed about news in Thailand, especially about this current immigration situation. Richard has been around for a long time and is equipped with good connections to both Thai Immigration and sources at embassies.

There have been reports in local Thai media such as the Bangkok Post that Immigration warned people on expired visas would be sought out, arrested and deported once the visa amnesty ends.

He added more than 150,000 foreign nationals holding tourist visas are currently in Thailand although the deputy spokesman did not give an exact number.

A source in the IB said authorities were concerned some stranded tourists might not turn up to request visa renewals.

They might prefer to remain in the kingdom illegally if the virus has not been tackled in their home countries.

The source added some stranded tourists might also take up employment illegally as a means of gaining financial support and refrain from contacting their respective embassies in Thailand.

They fear they might be repatriated to their Covid 19-ravaged countries. …

I’m skeptical about both the number of remaining “tourists” in Thailand as well as the prospect of mass arrests and deportations. This situation does however open the door to spot checks of foreigners by police and possible (likely) solicitation of bribes if documents found to be not in order. Foreigners in Thailand are required to always have their identification on them, in some cases photocopies are accepted.

Foreigners looking to remain in the country should familiarize themselves with the legal consequences they could face as result of an overstay. 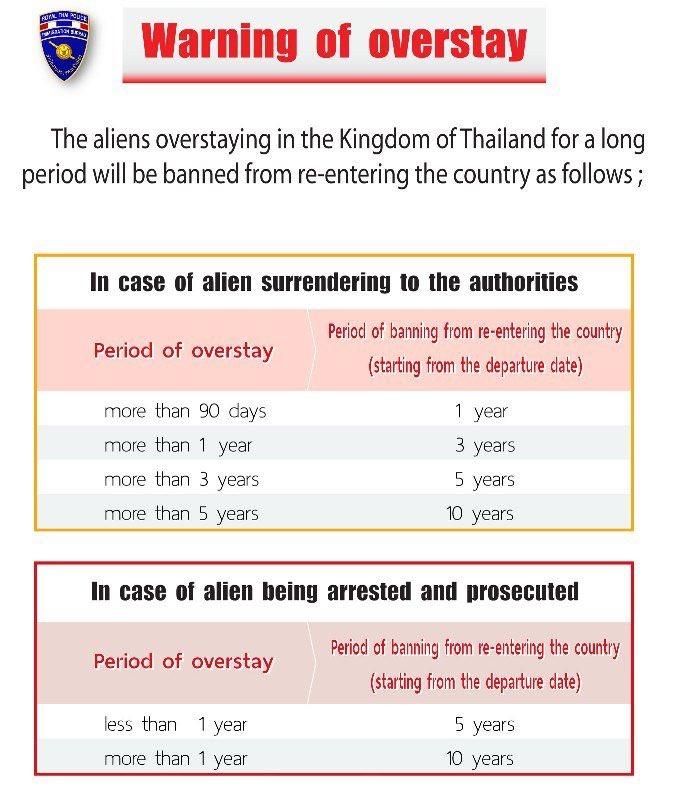 It’s unlikely there will be further automatic extension of tourist visas at this point even though those affected have been holding out for the last few weeks if there is yet another last minute announcement which hasn’t been forthcoming this time.

Those people are now in a bind. It’ll be extremely unlikely for those “last remainers” to hop on a flight in the next 48 hours and I feel many of them are going to risk it going into an overstay situation with whatever consequences that will entail.

The ending date of this automatic extension was always known to be September 26th and there were ample options available over the last months to sort out a long term visa (often involving “under the table services” through visa agents). Of course many gambled they could remain for an indefinite period and get away without paying, a bet that doesn’t appear having turned out in their favor.

It’s my personal opinion (and really just that) that foreigners who benefited from this visa amnesty for now 6 months shouldn’t overstay their welcome. There have been continuous flights that allowed foreigners to leave on their own accord plus numerous repatriation flights organized by the embassies. The vast majority of people still in the country are there because they want to stay, not because they can’t go home.

I do realize that the situation in some countries especially the U.S. doesn’t look all that enticing to go back to but in the end of the day there are immigration laws in place worldwide that we have to abide by as visitors.