Remember the case back in September (read more here), when an American guest in Thailand got jailed for leaving a negative review of a resort on Tripadvisor? 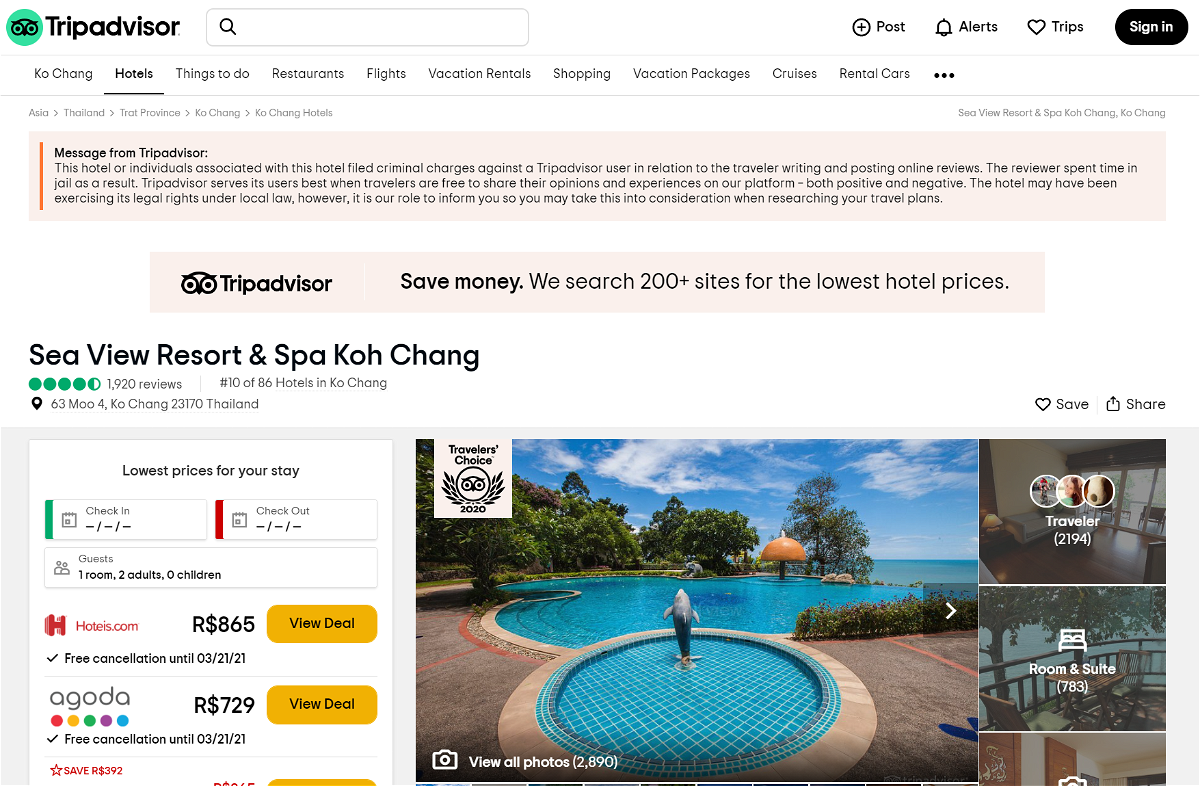 The guest got out of jail after spending there for two nights by removing the review and apologizing to the resort. Now Tripadvisor, however, is warning that the reviews left for this hotel may not reflect reality.

This hotel or individuals associated with this hotel filed criminal charges against a Tripadvisor user in relation to the traveler writing and posting online reviews. The reviewer spent time in jail as a result.

Tripadvisor serves its users best when travelers are free to share their opinions and experiences on our platform – both positive and negative. The hotel may have been exercising its legal rights under local law, however, it is our role to inform you so you may take this into consideration when researching your travel plans.

Tripadvisor put up the warning after the guest safely left Thailand according to the New York Times:

Wesley Barnes, the American traveler who was arrested after being charged with criminal defamation for posting critical reviews of the Sea View resort on the island of Koh Chang, quietly left Thailand this week.

With Mr. Barnes safely out of the country, Tripadvisor took punitive action on Wednesday against the resort, posting a one-of-a-kind notice on the Sea View’s page warning travelers that the hotel was behind the jailing of a guest for his harsh reviews.

The settlement between the guest and hotel had required Tripadvisor not to put up a warning:

Tripadvisor began paying his legal fees and helped bring the parties together to negotiate. Eventually, the Sea View agreed to drop its complaint if Mr. Barnes made a “sincere apology” for his reviews, which they said included “xenophobic comments against hotel staff.”

Mr. Barnes accepted the offer, and in a statement that resembled a forced confession, he apologized and thanked the hotel for forgiving him.

The fine print of the settlement also required Mr. Barnes to obtain an agreement from Tripadvisor, and he asked the company for a commitment that it would not post a “red badge” warning — Tripadvisor’s most dreaded notice — on the hotel’s page.

Now the hotel accuses Tripadvisor not acting per their agreement:

In its statement, the Sea View accused Tripadvisor of reneging on its commitment by posting the new notice.

“We fail to understand how Tripadvisor going back on their word, and not being impartial, is helpful to any of the parties involved in this case,” the hotel said.

Tripadvisor countered that the company was not a party to the settlement and that its commitment was to Mr. Barnes to keep him out of prison.

“We have no agreement with the hotel,” Mr. Young said. “We sent a letter to Mr. Barnes taking steps to ensure his safety. We told the hotel the letter was accurate when they asked. We also have not violated any terms of the letter.”

The review left by the guest may not have been fair or even logical, but sometimes businesses need to understand that trying to “manage” them is not right and worth the time, and better to move on.

Hotels have many venues to “game” their reviews on Tripadvisor’s platform. After leaving a critical review, you often receive an email that requires you to confirm that it was actually left by you or otherwise, it will not be posted and just disappears. I would assume that more than half of the critical reviews disappear during these “confirmation” steps.

Then there is the issue with free speech in Thailand and the New York Times article (worth a read) goes more into detail.

Also, defamation is considered a criminal and not a civil offense in the country.

Airfare of the Day [Upper Class] VIRGIN ATLANTIC London to Delhi from £1,191 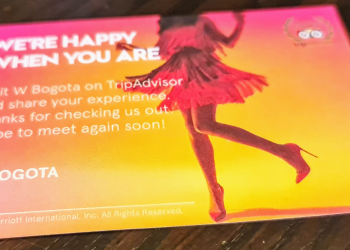 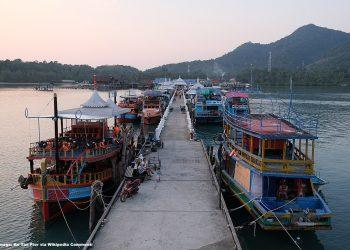 A disgruntled American hotel guest who posted several bad TripAdvisor and other online reviews about a resort in Koh Chang,... 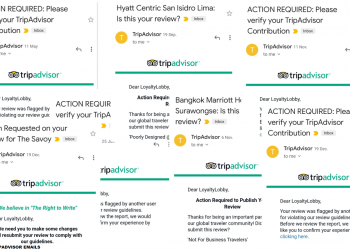 There has been a lot said about online reviews in recent months. Some studies suggest that more than half would...