Previously readers have sent us questions regarding the Marriott Bonvoy global promotion that ended on November 10th and the 3rd stay bonus of 5,000 points that were still missing.

These missing 5000 points have just posted on members Marriott Bonvoy accounts so you can check and see if yours were credited too!

Here’s a previous question from one of our readers that we already featured:

Due to Marriott promotion

“Get 2,500 bonus points on each stay, plus a one-time bonus of 5,000 additional points after three stays”

I have question about one time 5000 point, Did you get it?

Until today nobody has received it automatically, although some were successful claiming it through customer care (and probably got it again today?).

Marriott Bonvoy launched its last global bonus points offer in August that was supposed to end mid-October but was extended until November 10, 2020. Since then there has been no promotion anymore except some targeted ones.

The 2,500 bonus points for each stay consumed during the promotional period posted correctly with the stay, but the 5,000 points extra for the third one have not.

The promo T&Cs state that it may take up to six weeks after the offer ends for the bonuses to post. You should get them by the end of 2020.

Bonus points will be awarded to the member’s account up to 6 weeks after the promotion ends.

It’s not roughly 3 weeks since the last day of the extension has passed and at least my own 5000 points just posted like this: 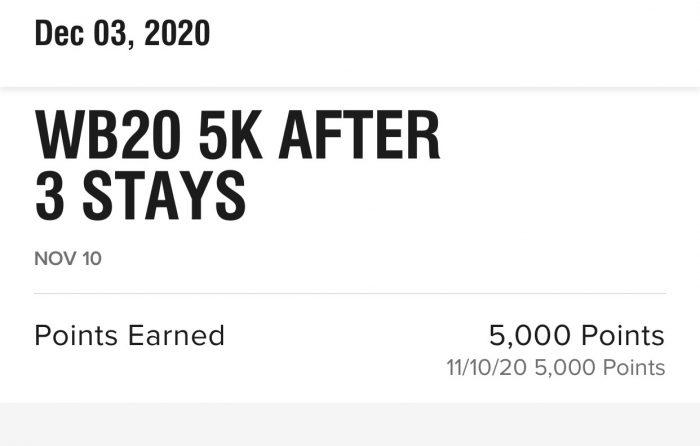 Finally we can put this matter to rest. No idea why these 5k took weeks to post while the original 2,500 points per stay always posted instantly.

I have managed to earn 30,000 points from this promotion which is rather decent and I didn’t even push it. Unfortunately since this campaign ended Marriott has “fizzled out” and their competitors Hilton and Hyatt have taken over. No point for me (pun intended) staying at a hotel chain that doesn’t offer any incentives while the competition does.

I think Marriott should really work on the way their bonuses post to the accounts, both in terms of timeline but also as identifiable amounts.

Bonvoy lumps all bonus amounts into one number without being able to tell how many points are posted for which purpose. Marriott must have gotten thousands of inquiries about these missing points which would be completely avoidable if they had executed this (very profitable) promotion a bit better.