In an effort to reassure employees and the public, this week American Airlines CEO Doug Parker took a ride on the Boeing 737 MAX together with his wife and other AA Executives.

The flight took off from Americans maintenance base in Tulsa, Oklahoma following the re-certification of the 737 MAX by the FAA following almost 2 years of grounding for commercial operations.

American Airlines has recently announced that they will push their Boeing 737 Max back into service as the aircraft has regained it’s FAA certification and the MAX will enter regular passenger schedules after January 4th.

This week Parker made good on an promise he gave in the past to be among the first to be flying on a 737 MAX again as soon as it’s ready to take to the skies again.

He was accompanied by many top executives of American Airlines including their President Robert Isom and also his wife Gwen: 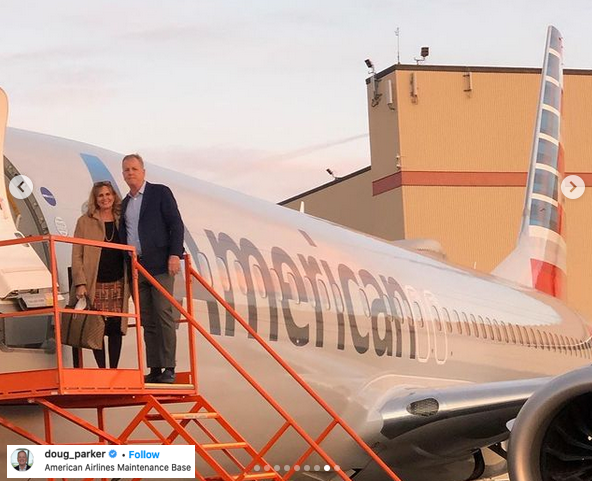 One may think whatever of Parker and his management style especially at the old U.S. Airways but he’s come a long way since then and appears to care for the company he runs. Of course he’s also being paid handsomely for it.

For 20 months, Boeing 737 MAX aircraft around the world have been grounded. Our hearts go out to the families of the victims whose lives have been lost, and we will never forget the tragedy that changed their lives forever.

In our industry, safety comes above all else. When that safety is in question, we band together to improve. Now, after the most extensive safety review in commercial aviation history, the 737 MAX has been recertified.

Today, @AmericanAir took our first 737 MAX aircraft back up in the air. In partnership with @AlliedPilots, @APFAUnity, @Boeing, @FAA, our Tech Ops experts and countless others, teams have worked diligently to prepare the aircraft to safely return to service.

I’ve long said that when American Airlines pilots – who are the best in the business – are comfortable and confident in flying the MAX, so am I. So today, along with my wife Gwen, American’s President Robert Isom and many others, we boarded the MAX at our Tulsa maintenance base with the utmost peace of mind.

Customers will see the MAX slowly phased into service starting at the end of December with a daily roundtrip from Miami. Until then, many thanks to American’s pilots, flight attendants, Tech Ops team and safety experts who worked tirelessly to get this right for the flying public.

I think one has to mirror one specific phrase here, namely “the most extensive safety review in commercial aviation history” which certainly is true.

This will boil down to a matter of belief but it’s my opinion that the 737 MAX is likely one of the safest aircraft in the skies today after all these overhauls of it’s systems. The airframe itself was perfectly fine, there is nothing to change.

The flight took off in Tulsa which is American Airlines main maintenance base and flew into Dallas where the group stepped off.

Once the aircraft is back in regular ratoation (sometime in Q1/2021) passengers will be put on them but they can check if their flight is operated by a 737 MAX. If the type shows the MAX the passenger can then change his flight free of charge to an itinerary that includes other aircraft types.

There is no reason to believe that the MAX isn’t safe at this point. It has been declared airworthy and re-certified by first by the Europeans and then the FAA. American wouldn’t let their most senior executives, let alone their families fly around on the plane if there was even the slightest doubt about the integrity of the aircraft.

My personal grievance with the 737 MAX isn’t the safety record but more the cabin comfort. It’s so damn tight in there that it really isn’t comfortable.