After six months of a flat line regarding Covid-19 infections, Thailand is now battling the resurgence of the virus in sudden and steep numbers, prompting the CAAT to suspend inflight food and beverage services once again. 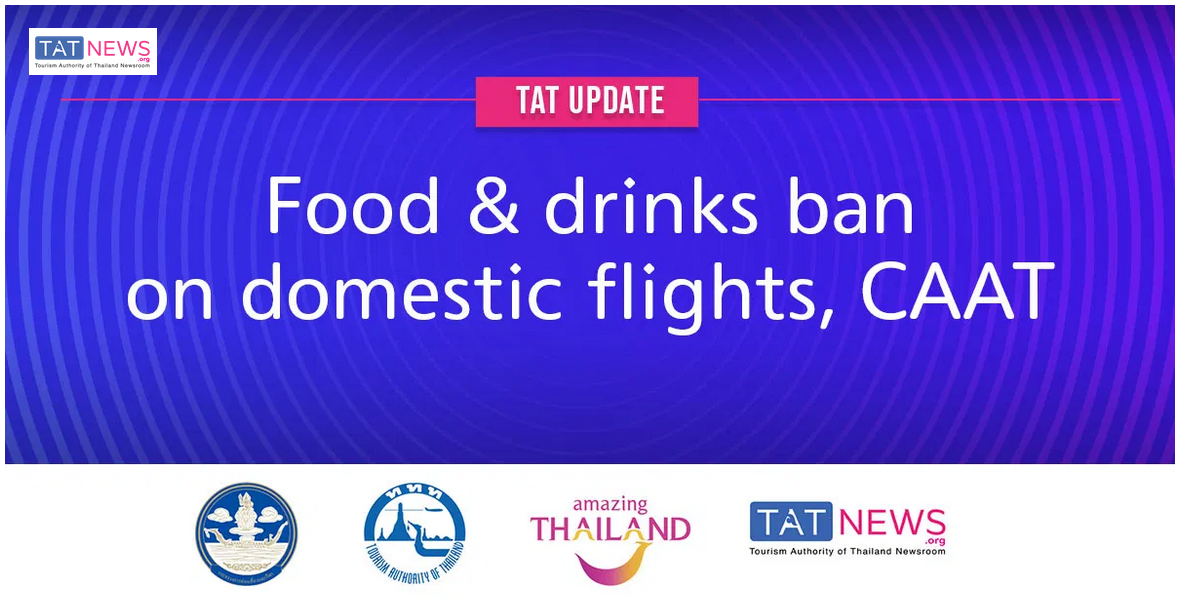 Domestic travel has been relatively normal in Thailand during the last six months and after a brief shutdown of domestic flight services the carriers were back in the air since early May.

I have take quite a few domestic trips in Thailand since this awful pandemic took it’s grip on the world and even wrote a short article about the good service Thai Smile provided on a short Bangkok-Phuket flight where a full meal was served.

These times are now coming to an end again as the CAAT (Civil Aviation Authority of Thailand) has banned the serving of F&B inflight effective today.

The CAAT’s 4th announcement maintains that airlines must continue to follow the health and safety regulations during the current resurgence of local transmission. These include:

Food and drinks served on board are prohibited. If utmost necessary, crews may consider offering drinking water to passengers in predetermined social distancing areas in the aircraft.

Newspapers, magazines, or brochures provided on board are prohibited with an exception for safety cards or pamphlets.

While no social distancing on seats are required in the aircraft, all crews and passengers are required to wear face masks at all times. Effective from 31 December, 2020, until further notice.

Ok fine, nobody really needs to eat or drink during a 55 minute flight from Bangkok down to the islands but to say the planes do no require any social distancing while at the same time every restaurant, park bench and shopping mall has distanced seating is a bad joke.

Instead of blocking the middle seats they pack every single flight while at the same time saying people aren’t allowed to take their masks off, even for drinking. These contradicting policies make no sense.

Here is a picture of what Thai Smile served me last time:

Scrapping the F&B service on domestic flight is basically the same system that was temporarily put in place when the domestic airlines first took off again in May. It wasn’t the end of the world – again we’re talking about flights that take an hour at best.

There have indeed been several reports and notices by the government that Covid-19 infected individuals have taken domestic flights in Thailand ever since the virus re-appeared in the country two weeks ago.

It is widely believed that illegal border crossers from Myanmar have brought the virus into Thailand and it was once again traced to – you guessed it – a wet market in a province near Bangkok where shrimp are being sold. People included in this violation of the countries strict quarantine rules are migrant workers from Myanmar but also Thai citizens who regularly cross the jungle border illegally, many of which work in illegal areas such as gambling and prostitution.

This puts an end to the six month lucky streak we enjoyed here in Thailand, a period where anything Covid-19 related was pretty much foreign to those living here.

“Locking down” the entire country isn’t possible at the moment as a substantial part of the population is currently all over the country for the Christmas/New Years holiday and the government has to at least wait until people are back home again to implement isolation procedures. Also keep in mind that Thailand doesn’t have a functioning welfare system like western countries that keeps people well fed and cared for while the whole country shuts down so the economic implications are far greater than elsewhere.

The resurgence of Covid-19 in Thailand is starting to impact daily life again and f&b services on the domestic flights have been ended effective today until further notice.

It’s expected that after the new year holidays there will be stricter measures implemented by the government that apply countrywide in all 77 provinces, each of which currently have their own set of rules and the governors issue different, conflicting orders often times twice a day. It’s possible that this will also see the temporary grounding of domestic flights like last time.

Domestic Travelers Within Thailand Now Might Have To Enter 14 Day Quarantine, Tourists Can Proceed To Phuket Following ASQ

World Of Hyatt Buy Points Campaign With 30% Bonus Through February...