This is a reminder to start exploring options of how to use up your American Airlines Systemwide Upgrades that are given to Executive Platinum members on a yearly basis, usually expiring January 31st but currently extended until July 31, 2021.

Upgrades will expire 1 year from the date deposited and Systemwide Upgrades can be used for travel beyond the expiration date – the upgrade just needs to be confirmed before the upgrade expires.

American has extended the expiration date for any Systemwide Upgrades in member accounts initially set to expire on January 31, 2021 until July 31, 2021 but the question remains: Then what?

I wrote about American Airlines extension policies right after they published them in April of last year.

To recap, this the policy pertaining to the upgrades:

Current systemwide upgrades that are expiring on January 31, 2021, will now be extended until July 31, 2021 and it’s important to stress this date as the status itself will be valid until January 31, 2022. Make sure to remember this discrepancy and don’t let the upgrades expire!

We’re already nearing February and so far I didn’t use any of my systemwide upgrades or as they were formerly called eVIP’s.

I talked to someone at AAdvantage Customer Service a few weeks ago and they said that no decision had been made what to do with these upgrades meaning if they will indeed expire in July or if American will extend them yet again.

Right now I’m in Asia and have no plan to go back to North America until the summer and definitely not more than once.

I decided to look around in my circle of friends and was happy to find someone who I could upgrade at least on a transcon domestic flight this week using two of my certificates: 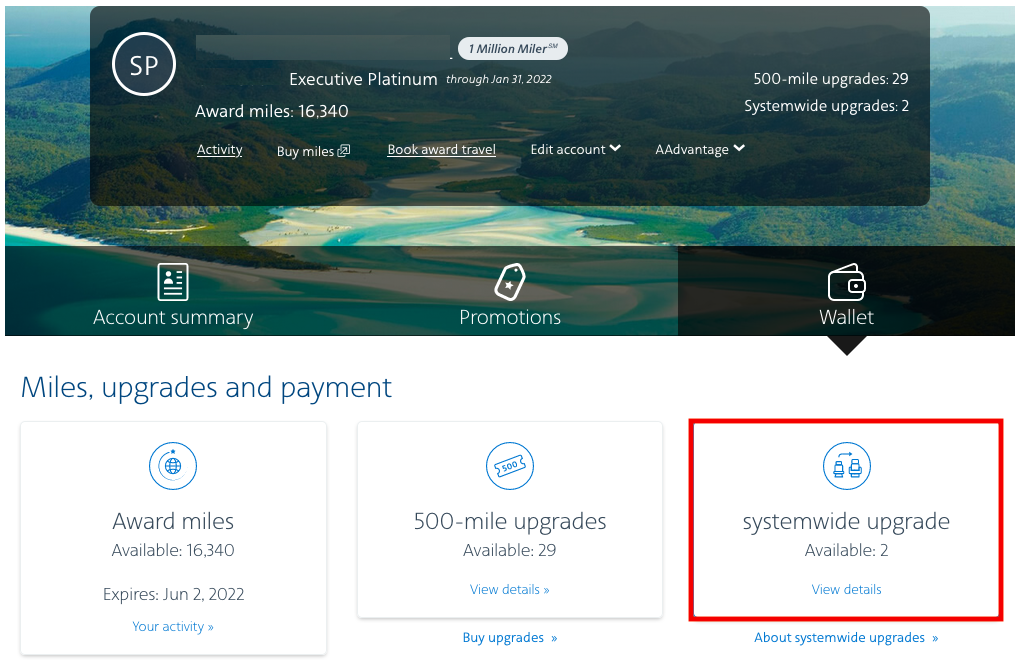 I will keep the remaining two upgrades in my account and see what American decides to do with them, worst case I either lose them both or find another friend to gift them to before they ultimately expire.

It would be unfortunate if I’m unable to use the upgrades for any personal travel but I’m not too upset about it as I got the status for free from my Hyatt Concierge early last year. Little did anyone know what would happen to us short after.

Right now American Airlines Systemwide Upgrades for Executive Platinum members which were supposed to expire this week were extended until July 31, 2021.

Considering the worldwide situation of international and even domestic travel it’s pretty easy to foresee what is or better said isn’t going to happen within the next six months. At least in my case I don’t see frequent international travel, let alone through gateways where I could use AA systemwide upgrades (I guess from Thailand flying via Tokyo would be an option but still).

If you’re in the same situation as me and have a bunch of upgrades still sitting in the account it’s a good idea to make some plans to either use them for yourself by traveling in the next six months, making tentative future travel plans or gift the upgrades to friends. Thankfully the certificates remain transferable.