Hyatt today released its fourth quarter and the full 2020 results, and they were what everyone was expecting and already knew – bad. 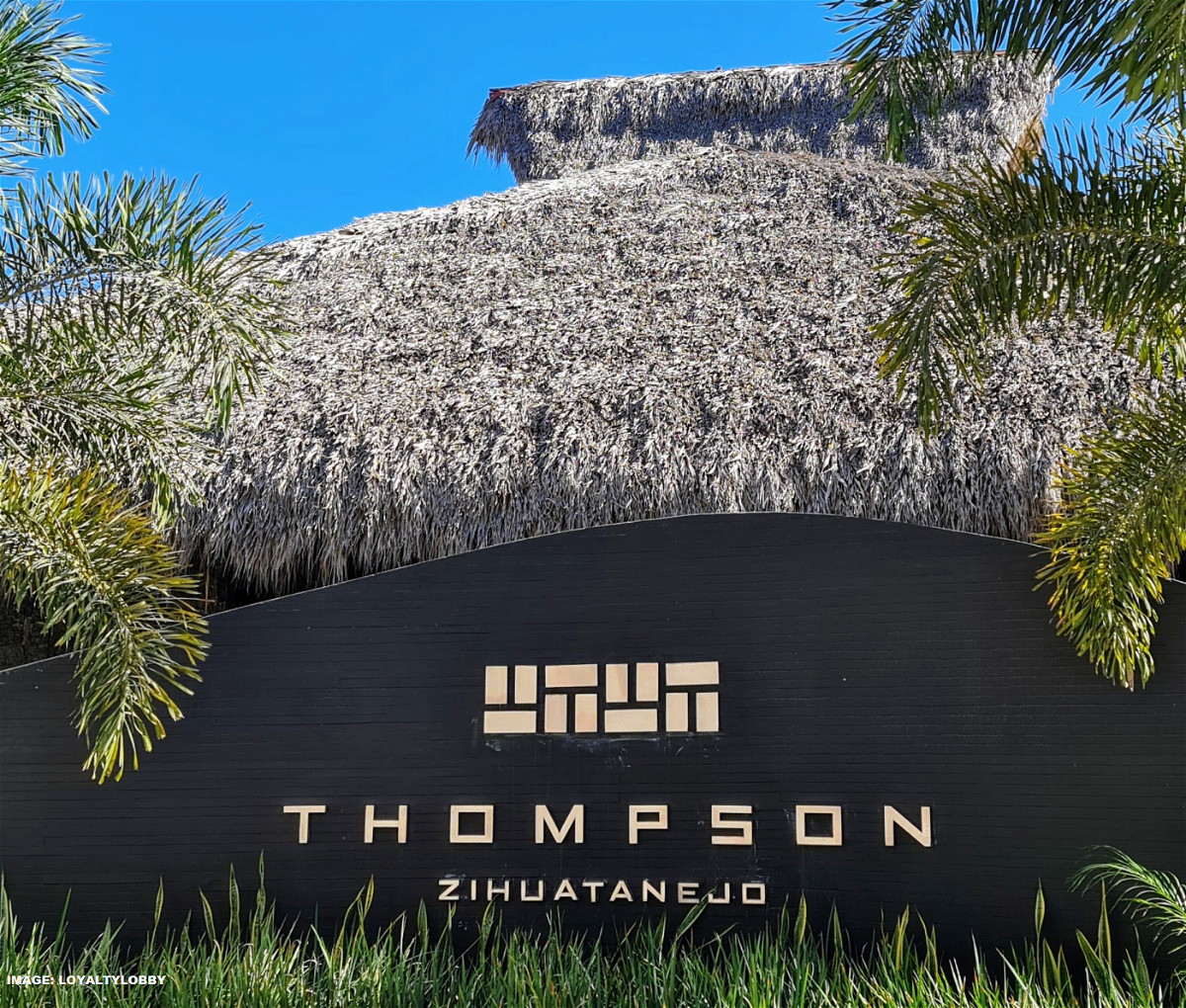 The hotel company lost $203M in 2020 and has 982 hotels + 16 Residence Club properties. Hyatt is expected to lose 22 Hyatt Place hotels in the US that they will hand over back to the owner (SVC), who will convert them under Sonesta’s brands (read more here).

Here’s the information that our readers may find most useful: 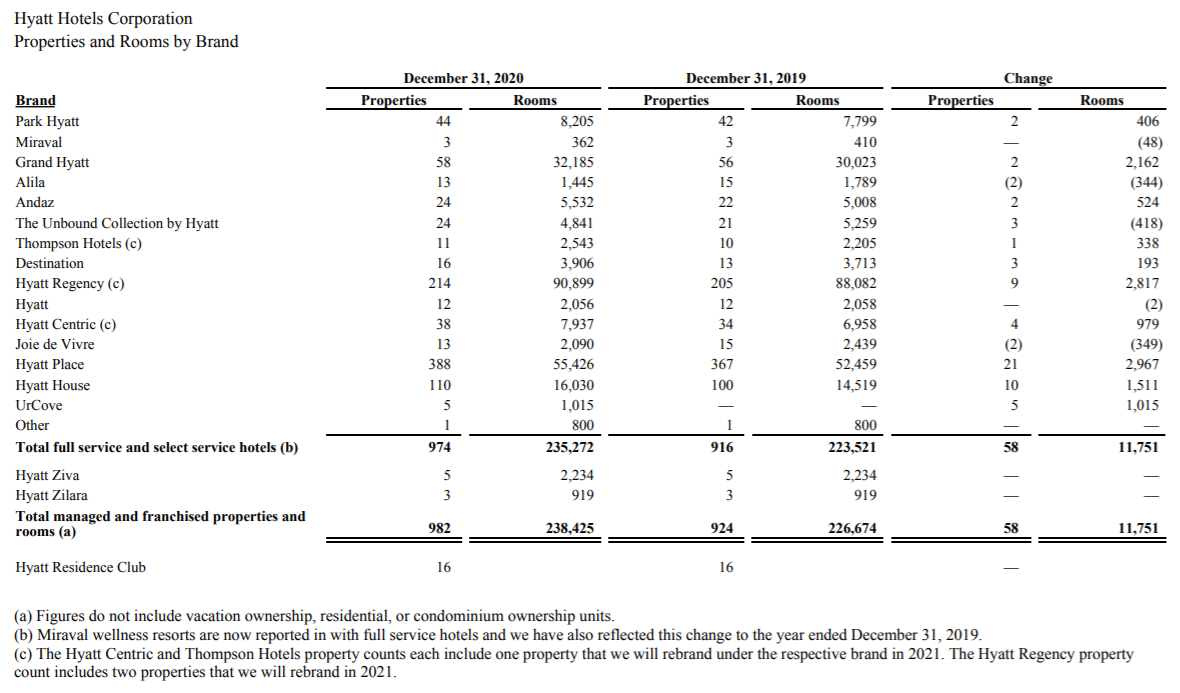 Hyatt has 982 hotels, of which select-service Hyatt Place and Hyatt House represent close to exactly half (498 hotels). 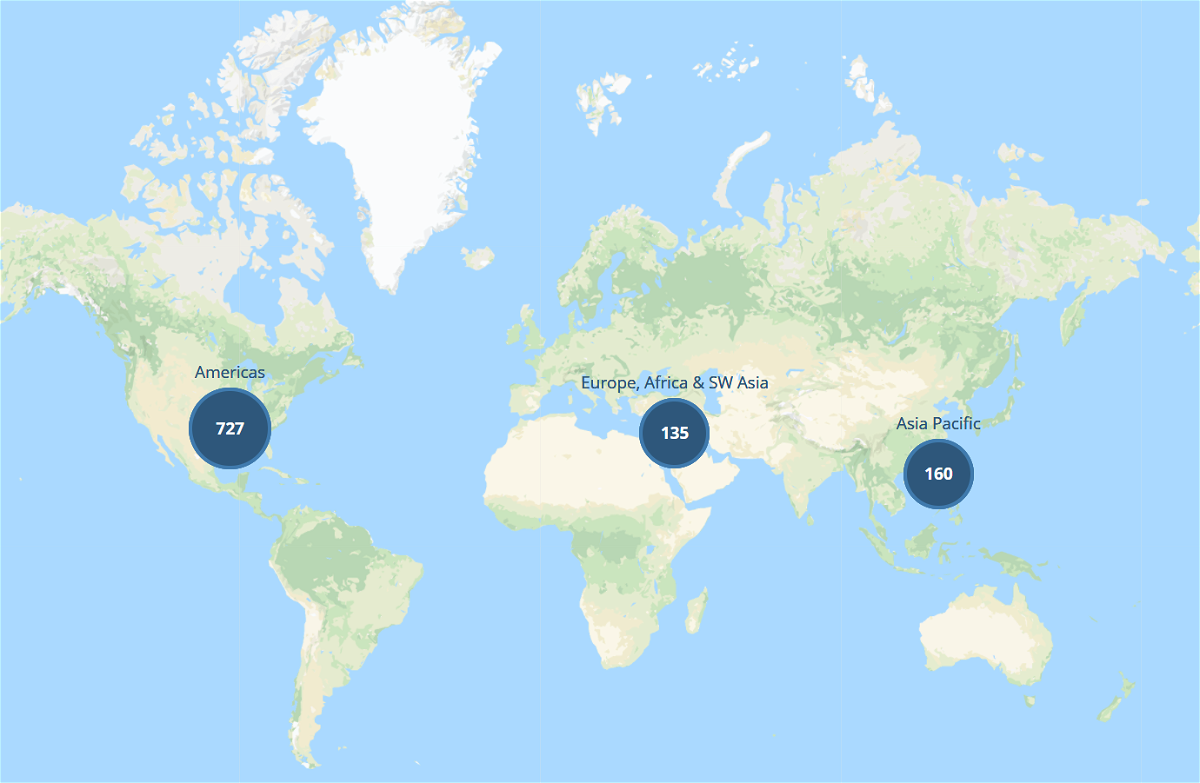 This image from a month or so ago that doesn’t match precisely with the number below but illustrates Hyatt’s global distribution. 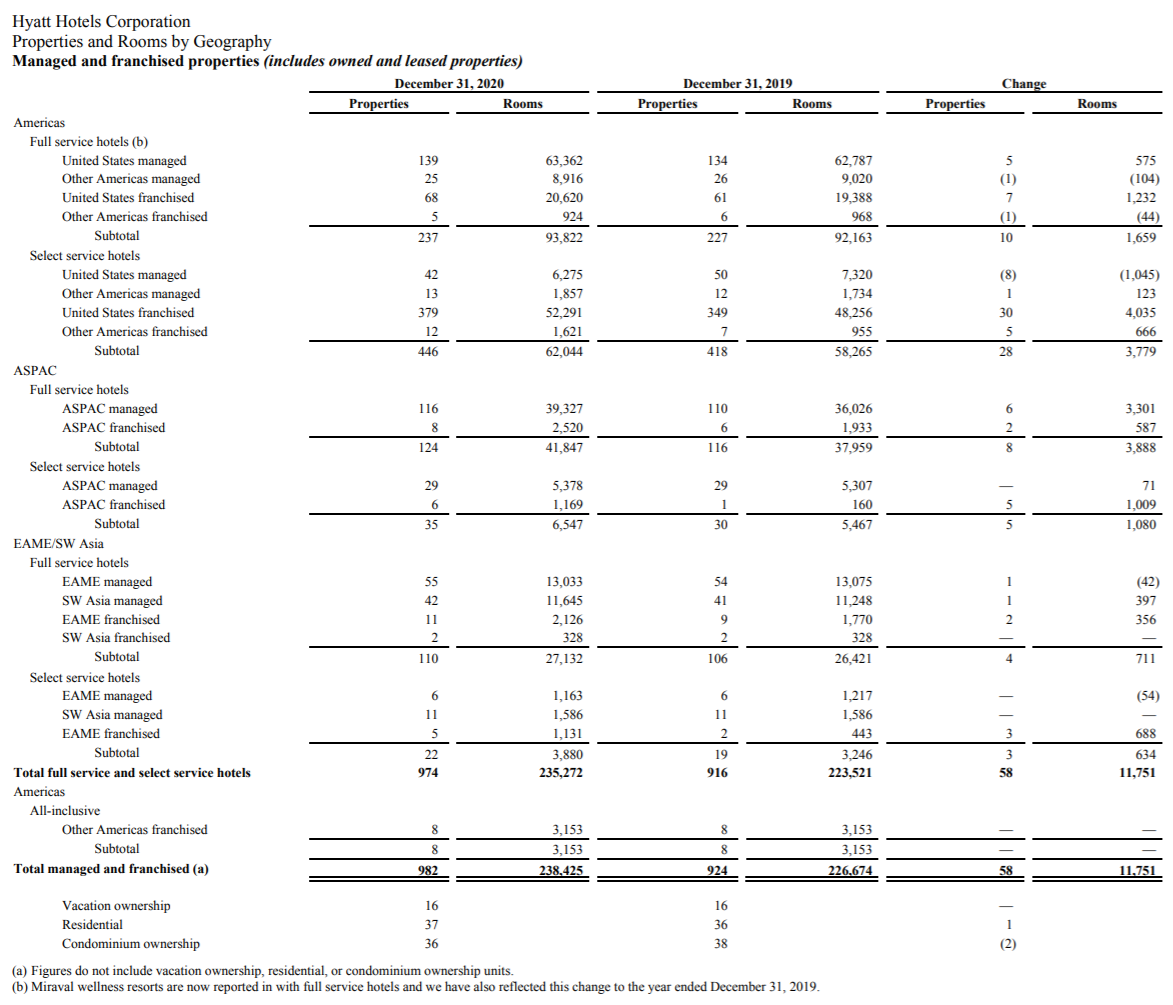 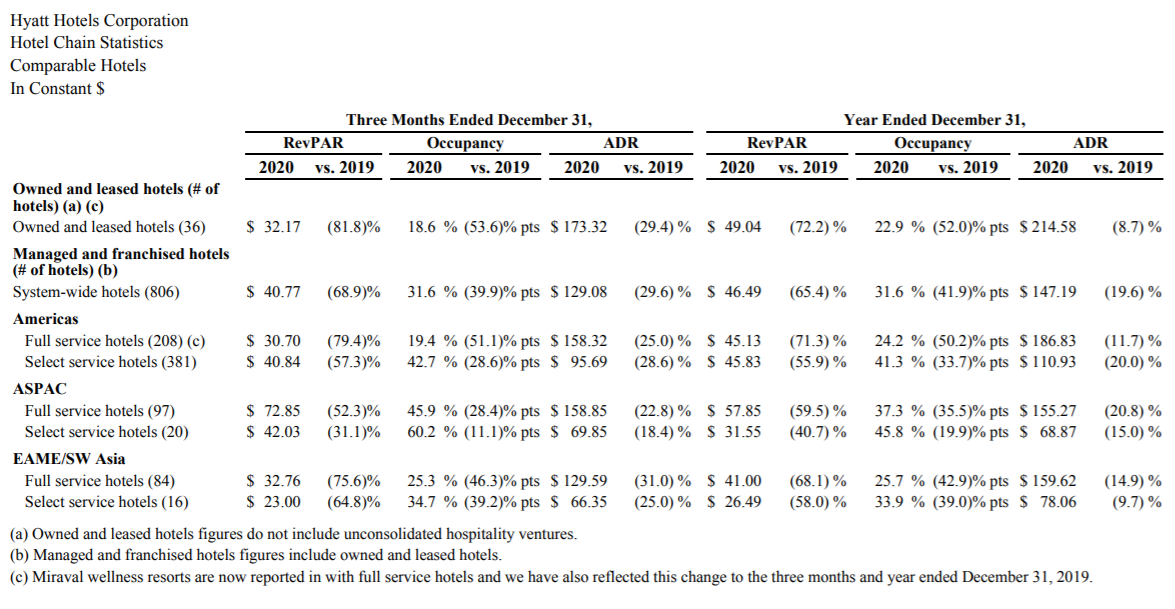 The select-service segment has 43% occupancy in the fourth quarter of 2020 in the Americas that is not bad compared to less than 20% for the full-service segment. 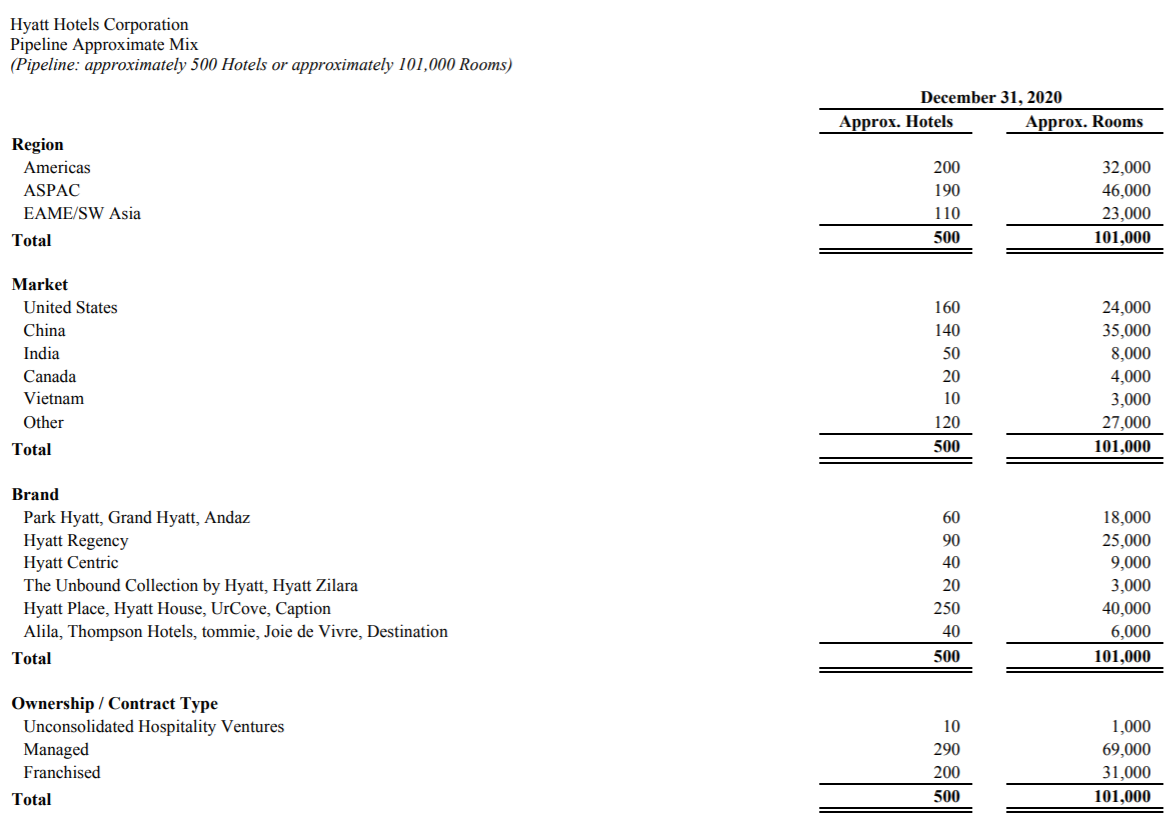 Here’s the rather extended release from the Hyatt:

Mark S. Hoplamazian, president and chief executive officer of Hyatt Hotels Corporation, said, “I am extremely proud of, and grateful for, the achievements of our teams around the world throughout 2020. The Hyatt family demonstrated resilience in the face of difficult decisions and undertook meaningful action to place Hyatt in a strong position as the recovery unfolds. Amidst a backdrop of challenging operating fundamentals, our net rooms growth was strong, demonstrating the strength of our brands. We opened 72 hotels and entered 27 new markets. Our teams also executed new signings to maintain a pipeline representing over 40% growth of our existing hotel rooms in the future.”

Mr. Hoplamazian continued, “We maintained a very strong liquidity position while the fourth quarter showed a modest sequential improvement in RevPAR. We are prepared for whatever 2021 brings, and we are looking ahead to realize improving financial results as vaccine distribution continues and travel restrictions are lifted over time. We continue to be guided by our purpose of caring for people so they can be their best, and this has sustained and strengthened our culture throughout the past year.”

Consistent with third quarter trends, occupancy was driven primarily by favorable leisure transient demand, particularly on weekends and holidays in the fourth quarter. Business transient and group demand continued to be muted. Hyatt’s full-service hotels in the Americas were negatively impacted by group cancellations.

Management, Franchise and Other Fees

Americas net rooms increased 3.5% compared to the fourth quarter of 2019.

ASPAC net rooms increased 11.4% compared to the fourth quarter of 2019.

EAME/SW Asia management and franchising segment Adjusted EBITDA decreased 121.8% (122.4% in constant currency) to $(3) million, including $4 million of bad debt expense. At December 31, 2020, 84% of EAME/SW Asia full and select service hotels (85% of rooms) were open. This reflects a slight decrease in the number of hotels open compared to September 30, 2020, as a result of new travel restrictions in Europe.

Corporate and other Adjusted EBITDA decreased 57.1% (56.5% decrease in constant currency) to $(65) million, reflecting an incremental $23 million loss as compared to the fourth quarter of 2019. Adjusted EBITDA was negatively impacted by $45 million of costs incurred on behalf of managed and franchised properties to provide necessary system-wide services and programs that we do not intend to recover from hotel owners.

The Company intends to successfully execute plans to sell approximately $1.5 billion of real estate by March 2022 as part of its capital strategy announced in March of 2019, and as of December 31, 2020, the Company has realized proceeds of nearly $1.0 billion towards that goal from the disposition of owned assets. In December 2020, the Company sold the shares of the entities which own the 159-room Hyatt Regency Baku in Azerbaijan for approximately $11 million to an unrelated third party and entered into a long-term management agreement for the property upon sale.

As of December 31, 2020, the Company reported the following:

The Company believes it has adequate existing liquidity to fund operations and investments supporting the continued growth of the business for approximately 36 months based on fourth quarter of 2020 demand levels.

During the 2020 fiscal year, the Company repurchased $69 million shares of Class A common stock, consisting of 827,643 shares, and paid a $0.20 per share common dividend in the first quarter of 2020. Effective March 3, 2020, the Company suspended all share repurchase activity, and the Company has suspended its quarterly dividend.

Given the uncertain pace and timing of recovery from the impacts of the COVID-19 pandemic, the Company is providing limited guidance for the 2021 fiscal year:

No disposition or acquisition activity beyond what has been completed as of the date of this release has been included in the 2021 Outlook. The Company’s 2021 Outlook is based on a number of assumptions that are subject to change and many of which are outside the control of the Company. If actual results vary from these assumptions, the Company’s expectations may change. There can be no assurance that Hyatt will achieve these results.

If you look at the Hyatt as a whole, its size is from one-fifth to one-seventh to Hilton, IHG, Marriott, and one-fourth of Accor (all in the number of hotels).

They have a higher percentage (roughly 50%) of full-service hotels than competitors that hurt the company in the current environment where select service performs the best.

They have a pipeline of 500 or so hotels. If they want to get into a bigger league, they really need to acquire a competitor and grow their existing brands fast.

If you think from the loyalty perspective, it could be your primary program if you mainly travel only in the United States or perhaps in China. The global footprint just isn’t there.

Email From British Airways: “Mr John, your account is at risk of being closed” 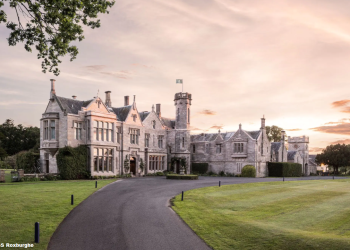 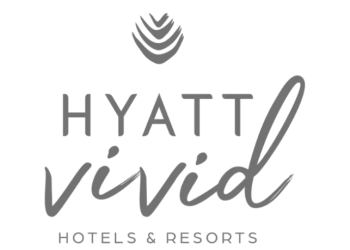