Marriott this morning released their fourth-quarter results that show a net loss of $164M, but with some magic, this number is turned to a positive adjusted EBITDA of $317M (close to half of the billion difference).

The hotel giant has a pipeline of close to 2,900 hotels, of which just under half were under construction at the end of 2020 and will likely materialize.

Here’s some information our reader may find interesting:

US & Canada versus International Managed and Franchised 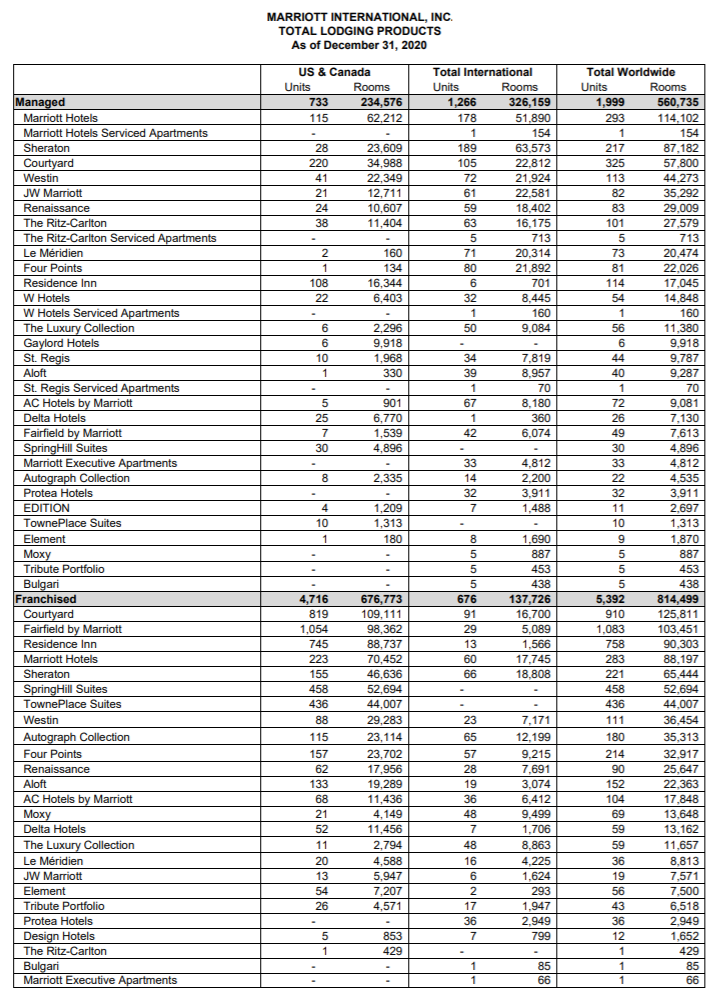 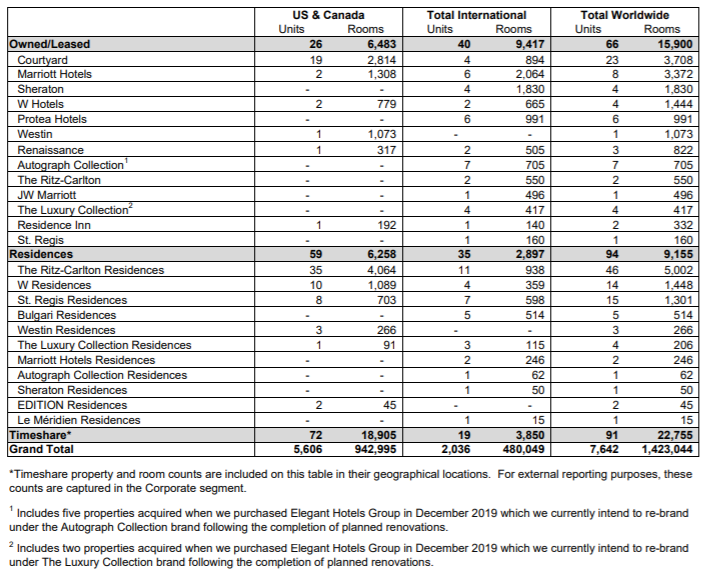 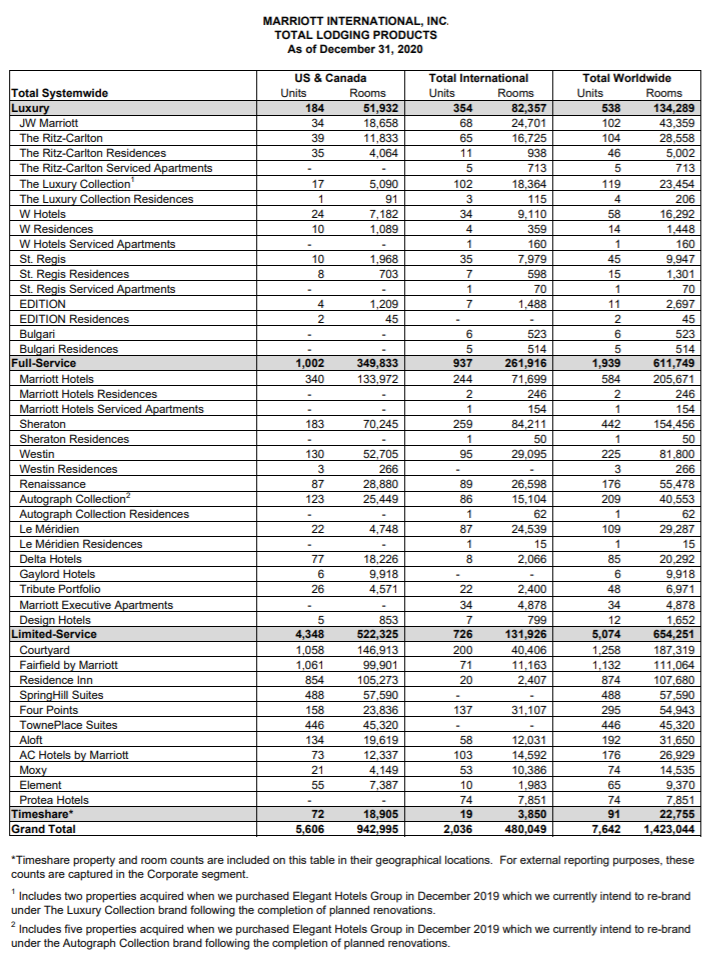 Two-thirds of Marriott’s portfolio are limited/select-service hotels, while luxury only represents 7%. The limited-service segment had performed better than full-service and luxury during the pandemic. 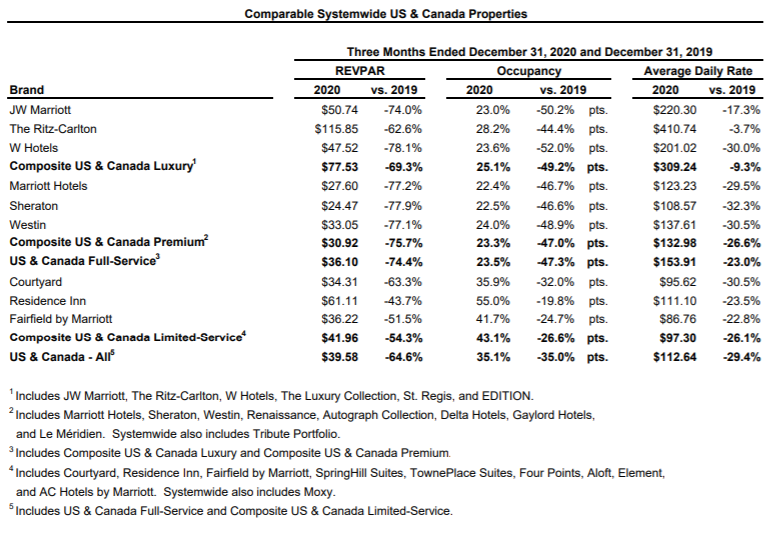 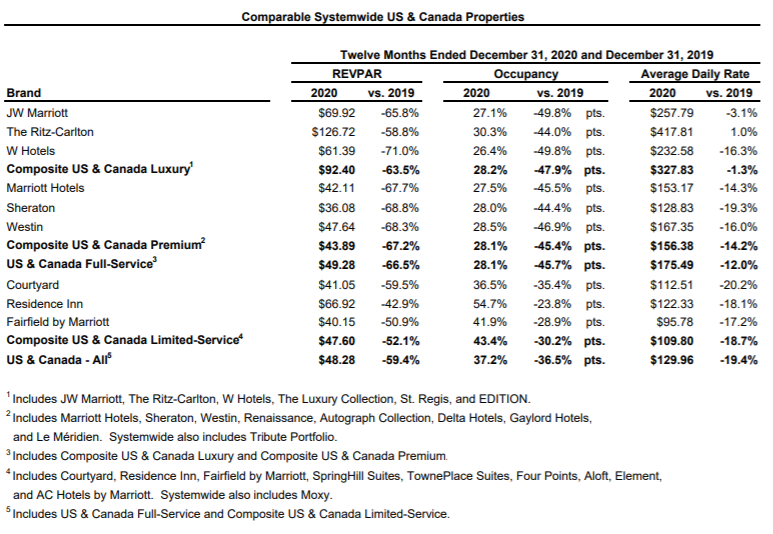 Leeny Oberg, Executive Vice President and Chief Financial Officer, said, “We are all deeply saddened by Arne Sorenson’s unexpected passing. We are grateful to have been able to work with such an inspiring and talented leader and will always treasure our memories of working with him. Our leadership team is committed to honoring him by building on his incredible legacy as we move the company forward.”

Ms. Linnartz said, “With the global pandemic, 2020 was the most challenging year in our 93-year history. In April, we experienced the sharpest worldwide RevPAR[1] decline on record, down 90 percent year over year with just 12 percent occupancy. Demand around the world improved from this trough at varying rates, with China leading the way. RevPAR in mainland China saw a meaningful rebound through the year and was down less than 10 percent year over year in December.

“While China has shown that demand can be quite resilient when the virus is perceived to be contained, we have also seen that progress can be slowed by significant spikes in virus cases, such as we saw in the U.S and Europe towards the end of 2020. Global occupancy remained at 35 percent in the fourth quarter, in line with the third quarter, and still substantially above the trough in April. While no one can know how long this pandemic will last, we are seeing some small, early signs that the acceleration of vaccine rollouts around the world will help drive a significant rebound in travel and lodging demand.”

Mr. Capuano said, “We are gratified that we continue to see strong demand for our industry leading brands from owners and franchisees despite the unprecedented challenges resulting from the pandemic. Our pipeline grew during the quarter to more than 498,000 rooms as of the end of 2020, with 46 percent of those rooms under construction. We are seeing strong interest in conversions, as demonstrated by our recent announcement of the planned conversion of 19 all-inclusive hotels with nearly 7,000 rooms to our system in the Caribbean and Latin America region during 2021. Looking ahead, we expect gross rooms growth could accelerate to approximately 6 percent in 2021.

“In the face of the unprecedented environment resulting from the pandemic, our associates and leadership team rose to the challenge. We worked closely with our owners and franchisees to help them weather the crisis by implementing cost savings, both temporary and permanent. And operationally we implemented heightened cleanliness standards across our portfolio to enhance the safety and wellbeing of our associates and guests, while also introducing additional protocols to help enable meeting and group business to safely take place.”

Ms. Oberg added, “In 2020, we moved swiftly to right-size our business in response to the precipitous decline in revenue by reducing costs, strengthening our balance sheet, and lowering capital spending. While the current environment remains challenging, we believe our financial condition is strong and we look ahead to the rest of 2021 with optimism.”

Adjusted results also excluded restructuring and merger-related charges, cost reimbursement revenue, and reimbursed expenses. See pages A-3, A-4 and A-13 for the calculation of adjusted results and the manner in which the adjusted measures are determined in this press release.

Base management and franchise fees totaled $379 million in the 2020 fourth quarter, compared to base management and franchise fees of $799 million in the year-ago quarter. The year-over-year decline in these fees is primarily attributable to RevPAR declines related to COVID-19. Other non-RevPAR related franchise fees in the 2020 fourth quarter of $133 million declined $24 million, or 15 percent, from the year-ago quarter, largely due to lower credit card branding fees.

Contract investment amortization for the 2020 fourth quarter totaled $38 million, compared to $17 million in the year-ago quarter. The year-over-year change largely reflects impairments of investments in management and franchise contracts.

Owned, leased, and other revenue, net of direct expenses, totaled a $27 million loss in the 2020 fourth quarter, compared to $92 million of profit in the year-ago quarter as a result of RevPAR declines related to COVID-19.

Equity in losses for the fourth quarter totaled $87 million, largely reflecting impairment charges and the decline in results at joint venture properties due to COVID-19.

The company’s net liquidity was approximately $4.4 billion at year end, representing roughly $0.8 billion in available cash balances and $3.6 billion of unused borrowing capacity under its revolving credit facility. During the fourth quarter, the company reduced its debt by more than $600 million.

The company halted share repurchases in February of 2020 and suspended its quarterly dividend beginning in the second quarter of 2020.

COVID-19
Due to the numerous uncertainties associated with COVID-19, Marriott cannot presently estimate the impact of this unprecedented situation on its future results, which is highly dependent on the severity and duration of the pandemic and its impacts, but expects that COVID-19 will continue to be material to the company’s results.

The company expects to provide additional information about the current impact of COVID-19 on its business on its call later this morning.

Here are the released numbers:

It makes you wonder what kind of trickery you need to engage in to have a half of a billion difference in the reported loss for the quarter and EBITDA (earnings before anything).

Marriott is on its way to 10,000 hotels by the middle of 2020s if everything goes to plan by looking at the current pipeline and what they will sign in the next couple of years unless this Covid-19 creates havoc way past 2021.

We should soon know who is the next President and CEO of Marriott after Mr. Arne Sorenson’s passing earlier this week (read more here).