Today we have a very unique Reader Comment related to a compensation for things that airlines let drop from the sky, in this case related to the Delta Air Lines fuel dump over greater Los Angeles in January 2020. 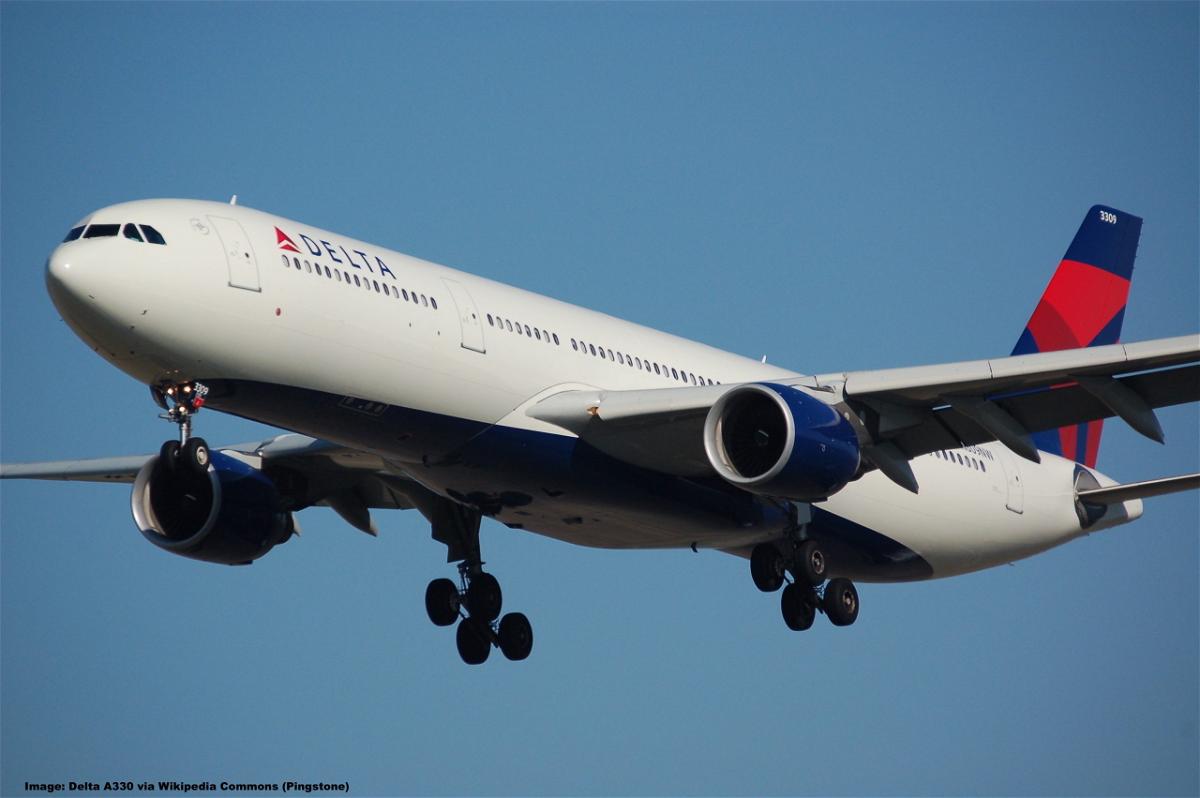 It’s rather unique that you’ll ever find yourself in the situation where something airplane related that dropped from the sky will require you to make an insurance claim but the most recent United Airlines engine failure incident that had engine parts rain down on residential areas was just such a case.

Another incident happened two years ago when a Delta Air Lines flight from LAX to Shanghai suddenly had to dump fuel after takeoff and did so over densely populated areas of Los Angeles.

One of our readers contacted us following my United article to tell his story and that it might end up to be very difficult to get a carriers insurer to pay up.

I read the United piece about people having their homes damaged by United engine parts smashing through their roof. Like you mentioned the airline or the insurance is liable for this. Well good luck with that!

A year ago Delta dropped fuel over the El Segundo area near LAX. I’m driving or drove at the time a convertible that was parked outside and actually noticed residue of said fuel dump in my car. I didn’t know what exactly it was until the media reported about it and I put the dots together. I went to my car dealership and they recommended to just clean the seats thoroughly, wipe down all the surfaces with a special cleaner and leave the car open (top down) for a few days. Thankfully I have a garage.

This cleaning process cost me a bit under $200 and I decided to claim this expense with Delta. The entire process has been a nightmare and to date, two years later, both the airline and their insurance company Allianz haven’t paid a dime. Not that they rejected my claim, they just don’t respond anymore for months. I attach a few emails.

I was more curious how they would handle this, I doubt by now that there is real serious effort to compensate anyone who incurred damages by this. Wonder if anyone sued considering media reports that people received medical treatment because of this!?

Indeed a rather unique and interesting case. Here are two screenshots of emails provided to us [I have removed personal contact information the the clear name of the insurance representatives].

The first was from a claims adjuster in the Los Angeles area who had the case for like 9 months:

Nothing came of it so then he contacted Allianz, Delta Air Lines insurance underwriter directly: 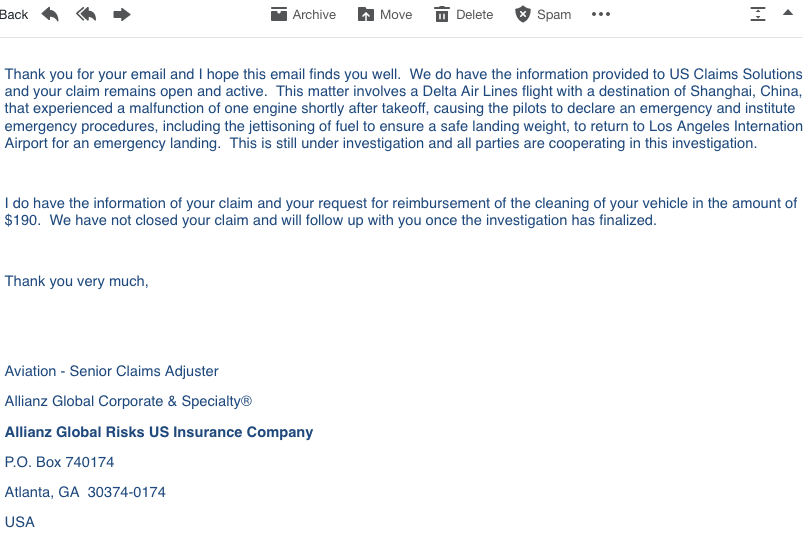 Again no reply since this email was sent in October of 2020. The reader now forwarded the case to the FAA and Department of Transportation.

I’m surprised how patient the reader is with this although we’re talking about a minor claim for cleaning here. I have no reference point how much jet fuel actually reaches the ground when dumped but there were reports of that in the original article linked above.

The LA Times wrote back then:

… A total of 60 patients were treated, at least 20 of them children. The Los Angeles County Fire Department said more than 70 firefighters and paramedics headed to Park School Elementary, where 20 children and 11 adults were treated for minor injuries. …

Hopefully the individuals affected by United Airlines engine debris will be more lucky with whoever the underwriter for their policy is. Some people ended up with holes in their roof and a destroyed kitchen while making a sandwich.

Anyone who ever had an insurance claim knows what a pain it is to regulate but over a year for a case that is relatively straight forward, has been forwarded by a local adjuster and is in the value of $190?

I can’t help but wonder if this insurance policy Delta Air Lines carries is really any good. Imagine a serious case such as a plane crash with fatalities. How would Allianz handle that if they can’t even deal with a fuel dump?

Maybe Delta should have just offered him a voucher to make this go away but they shoved everything away to their insurance which is standard procedure in such a case. Not very practical though.