American Airlines is following what United and Delta have already done and has decided to take a loan against the future cash flows of its AAdvantage program to the tune of $7.5B.

The airline, in the process, has issued information about its loyalty program, now being incorporated in the Cayman Islands, that it has not previously disclosed. 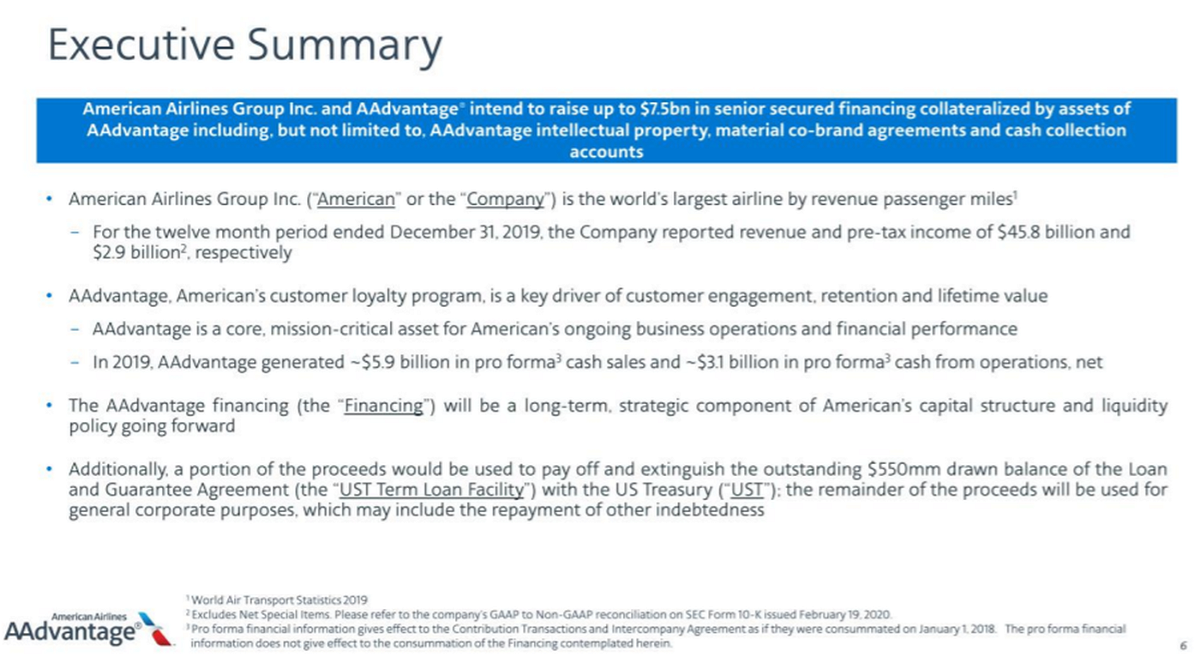 Who cares what the numbers were pre-pandemic in 2019? We are now in 2021, and it will take years for the airline sector to recover. 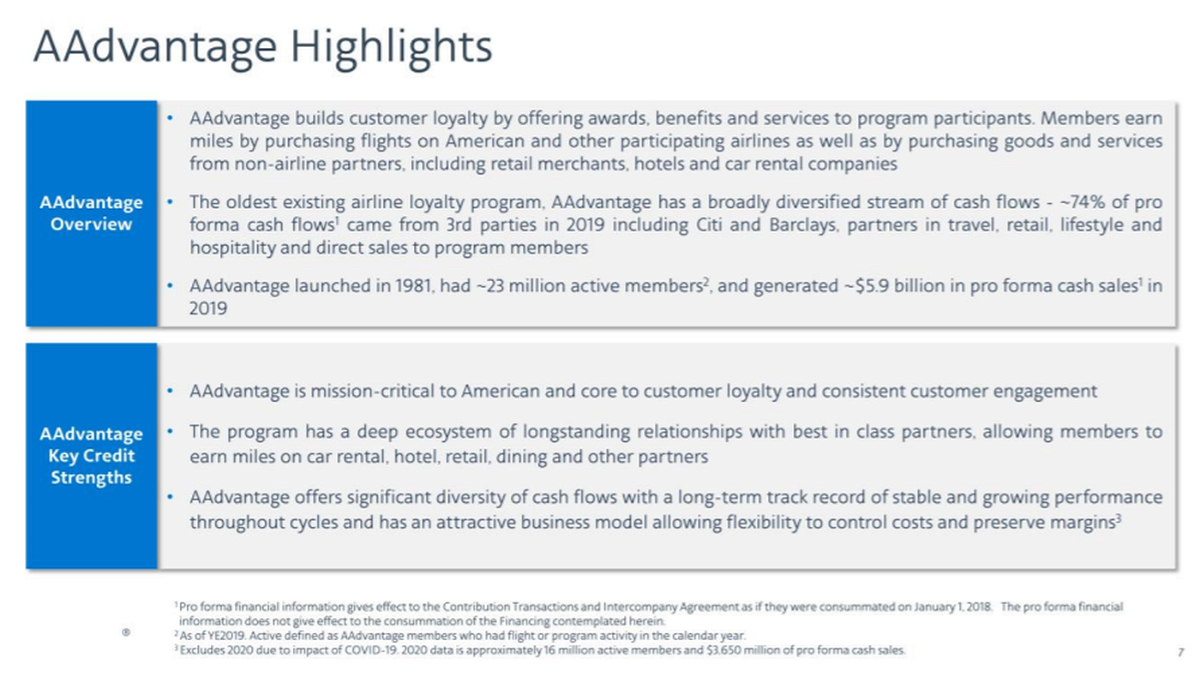 American Airlines admits on the footnotes that the program participation was lower in 2020, but not how much lower. Why? Isn’t this crucial information for investors? 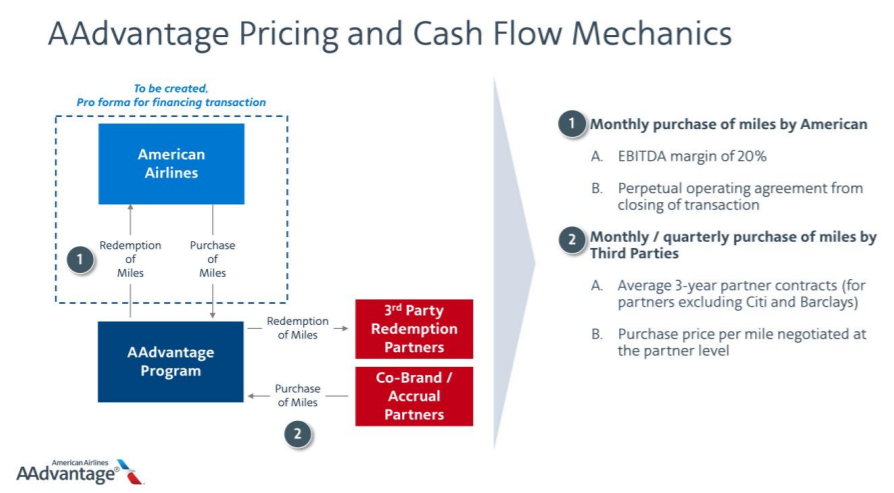 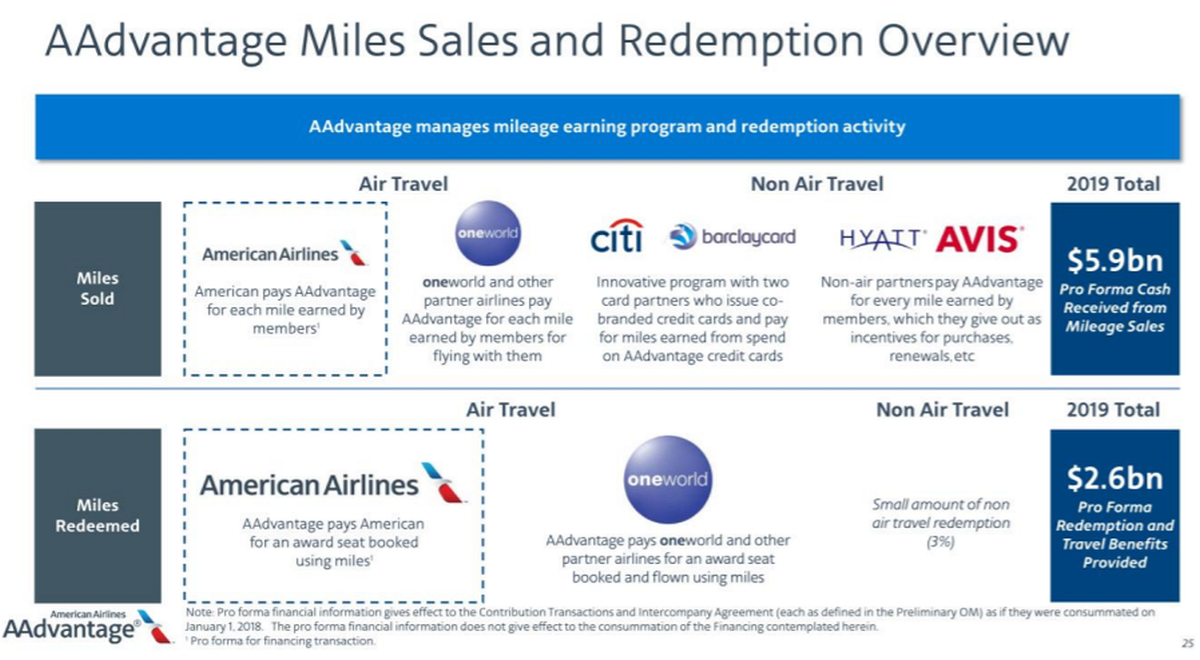 Remember that they earlier disclosed that 23M members were active in 2019. 80% of AAdvantage’s 115M members are effectively inactive (no transactions for a year). 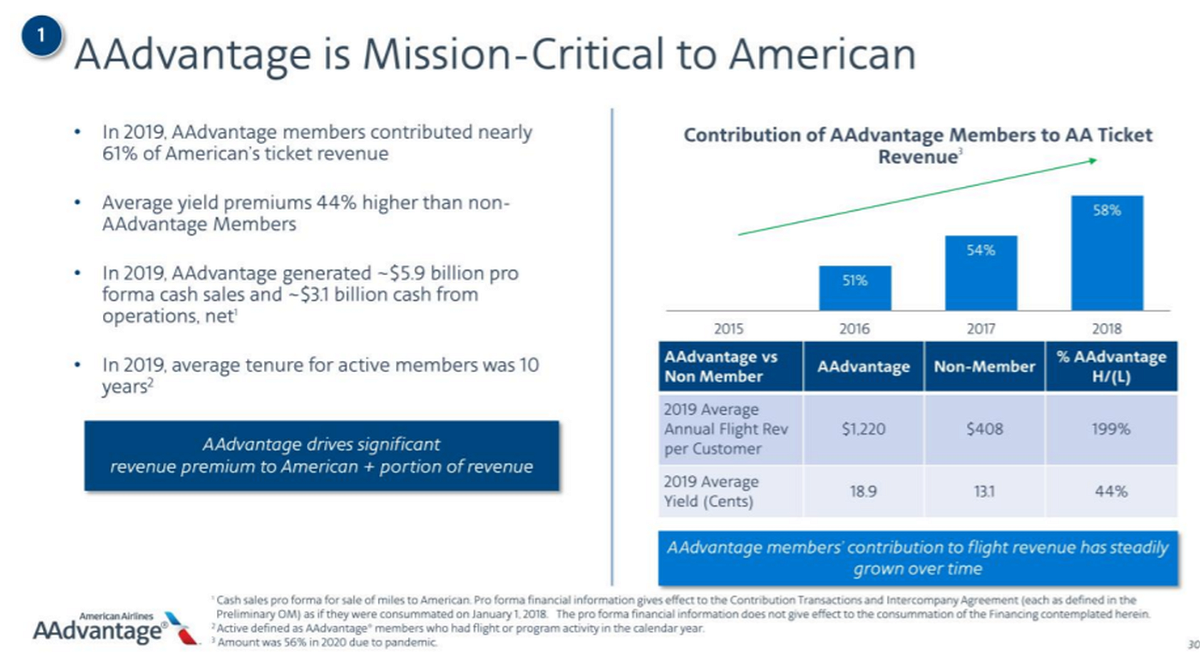 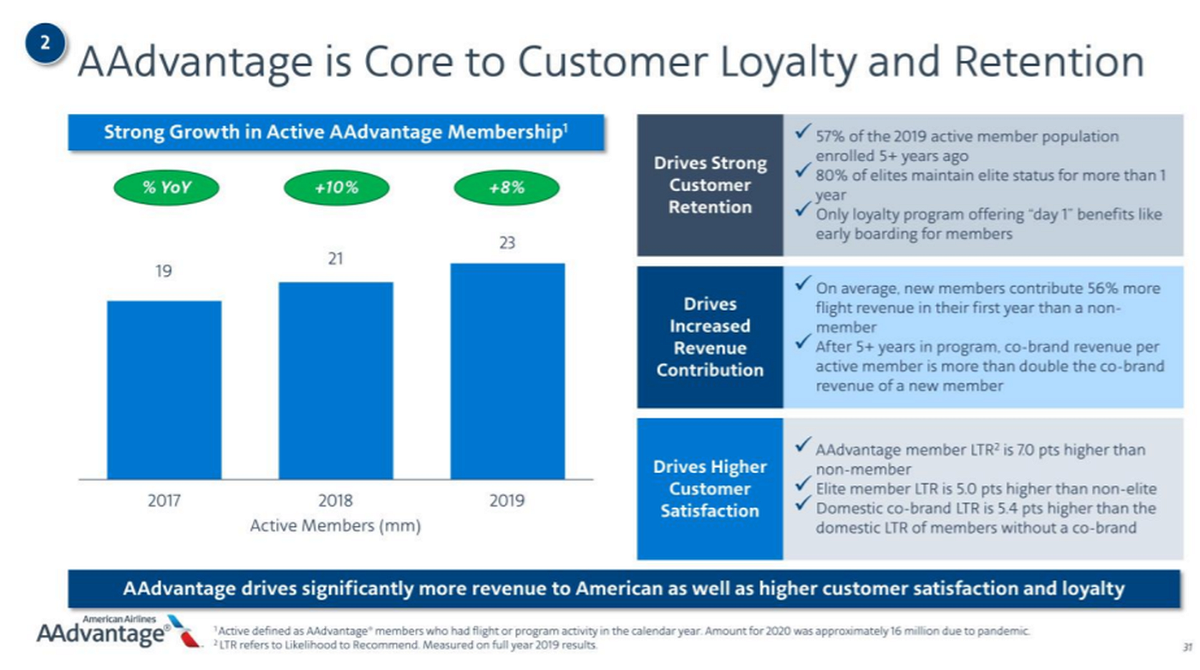 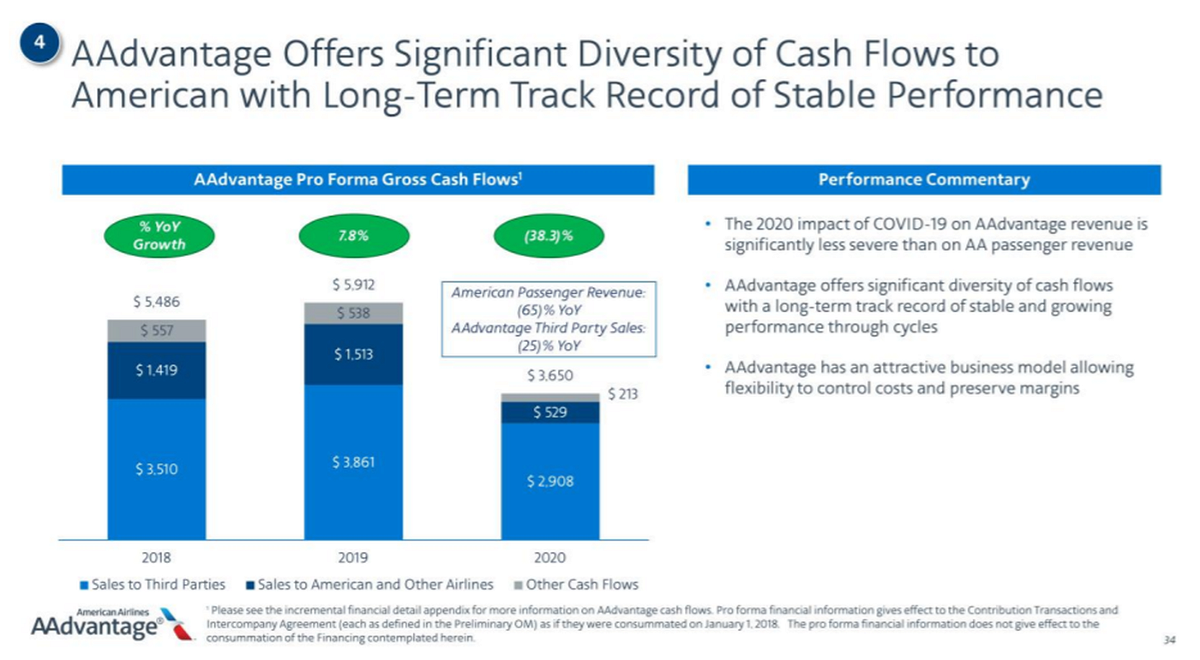 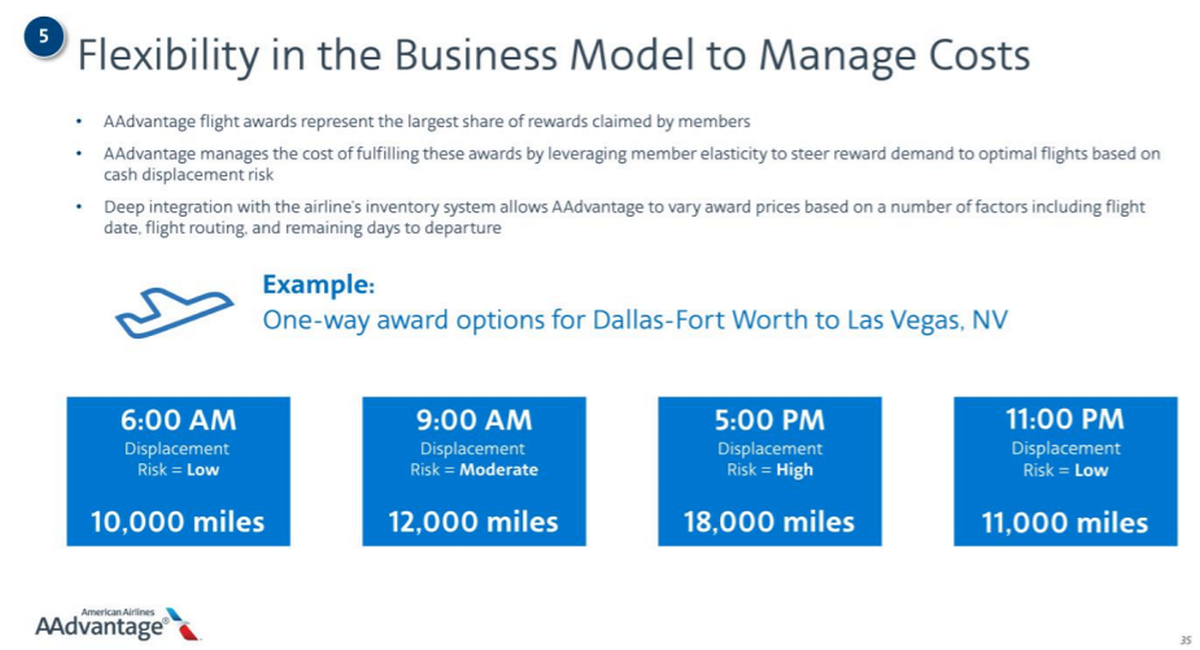 “Cash displacement”. AAdvantage tries you to get redeem for flights that you would not otherwise buy, i.e., with a long connection or with inconvenient timings.

“Intercompany Receivables” are essentially AAdvantage program “loans” to American Airlines that stand at $17.5B of total assets of $18.1B. The total liabilities (what future redemptions are assumed to cost) stand at $9.3B.

The miles sales to AAdvantage members have crashed 78% by the 4th quarter of 2020, and sales to third parties were 40% lower in the same quarter compared to 2019.

American Airlines debt, including operating leases, stands at $46B. 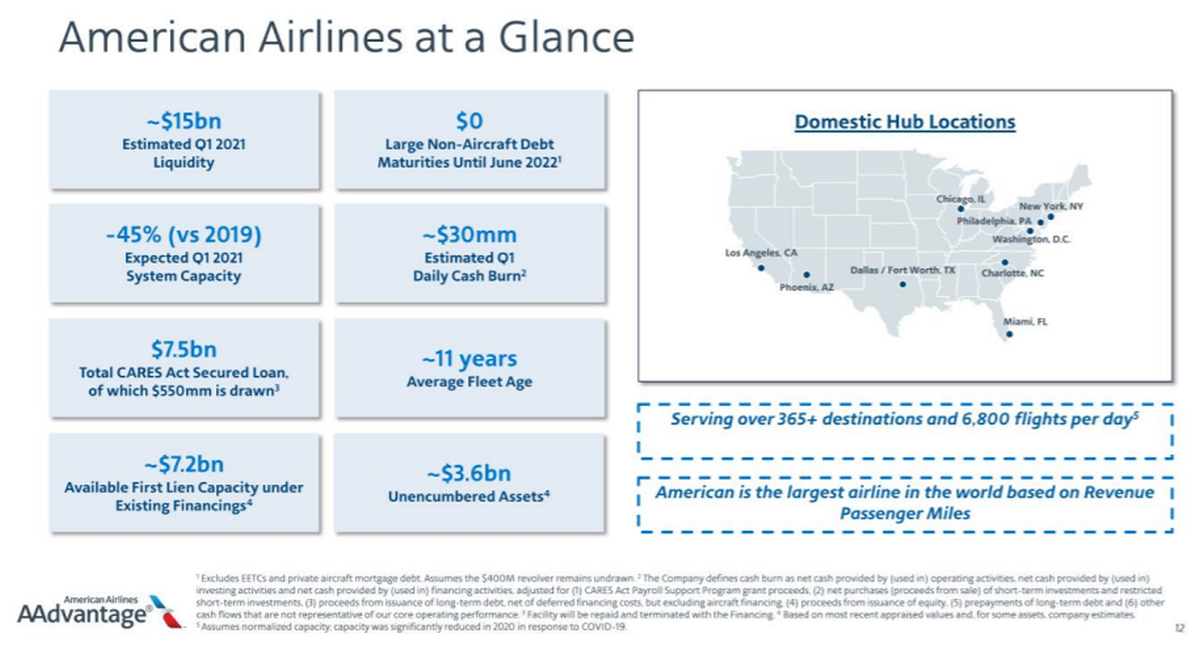 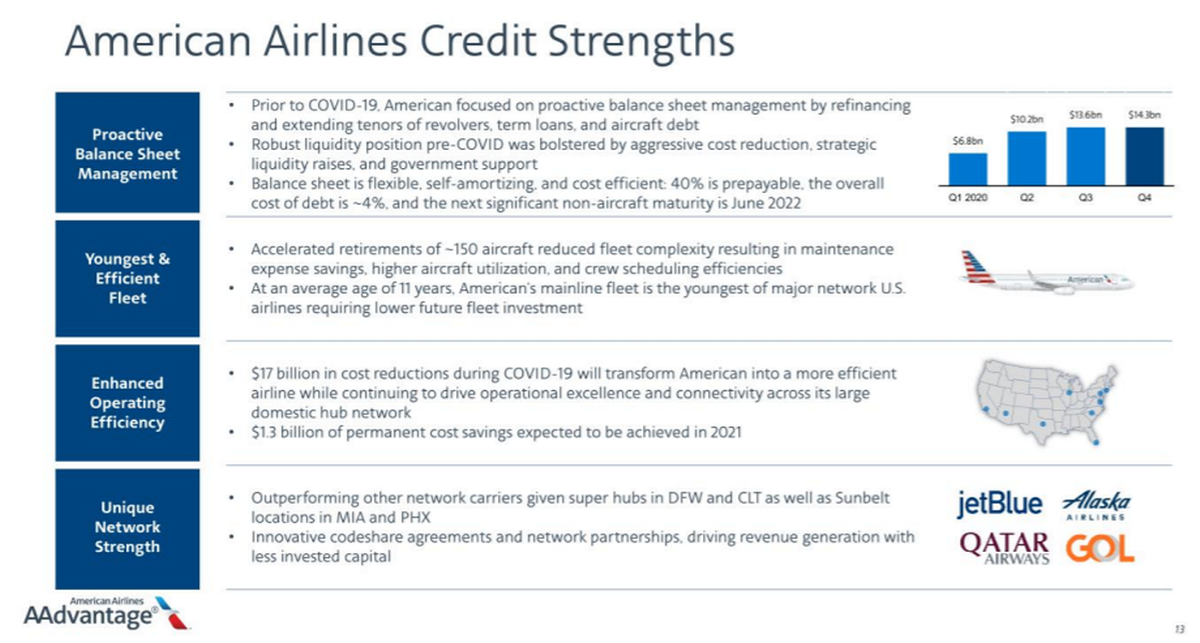 If the cash burn continues at roughly $1B per month, the airline has liquidity for 18 or so months. 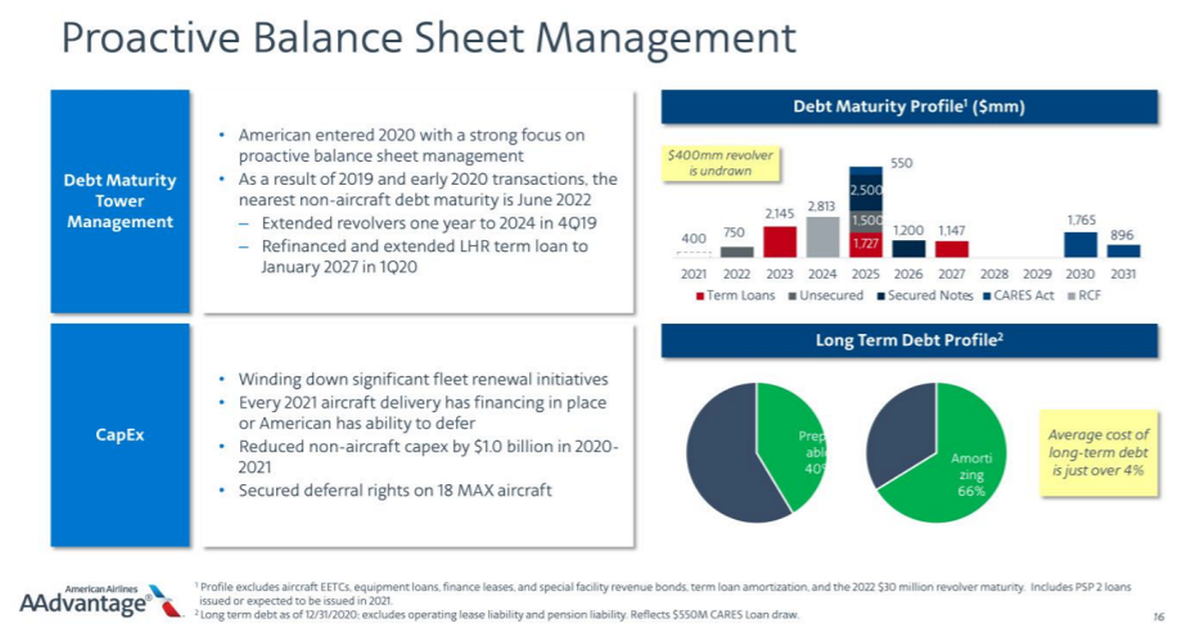 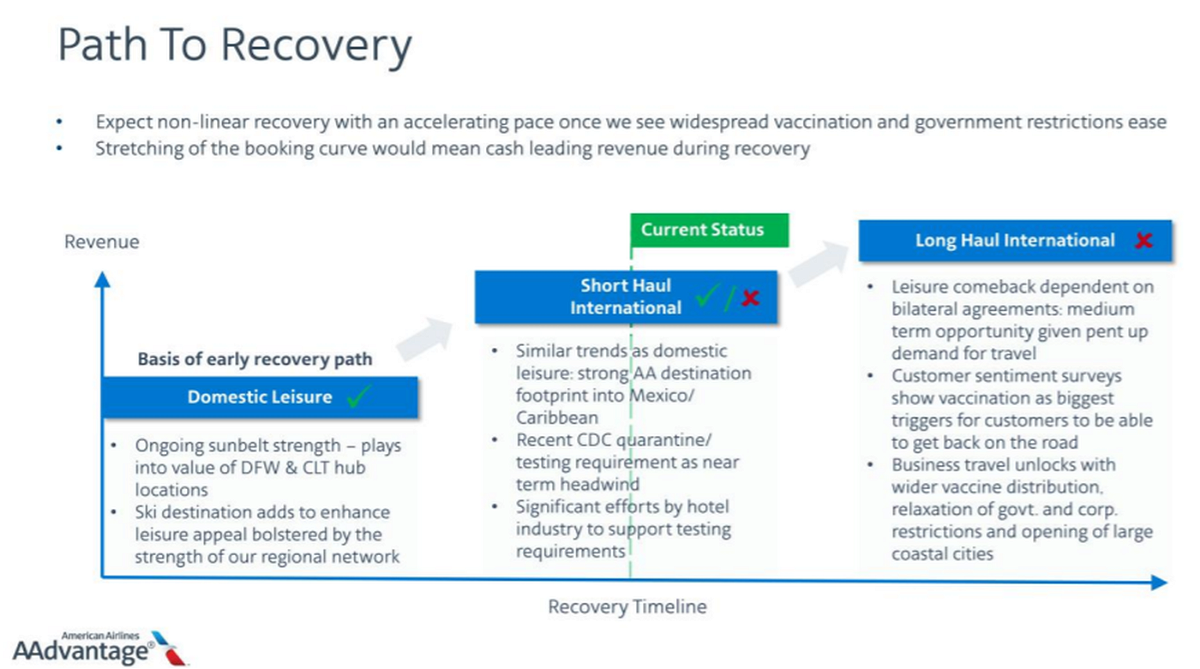 The airline sector is expected to recover to 2019 levels, perhaps by 2024/2025. It is unclear what effect there will be on business travel when more employees work remotely and there is less convention travel.

The Notes and New AAdvantage Term Loan Facility will be secured on a pari passu senior basis by a first-priority security interest in American’s AAdvantage program, including American’s rights under certain related agreements, intellectual property and other collateral related to the AAdvantage program.

AAdvantage Loyalty IP Ltd. intends to lend the net proceeds from the offering of the Notes and the New AAdvantage Term Loan Facility to American, after depositing a portion of the proceeds in certain reserve accounts. American intends to use the proceeds from this intercompany loan from AAdvantage Loyalty IP Ltd. to repay all amounts outstanding under the term loan facility with the U.S. Department of the Treasury that is currently secured by collateral that will secure, in part, the Notes and the New AAdvantage Term Loan Facility and to use the remainder for general corporate purposes, which may include the repayment of other indebtedness.

It is difficult to see how American Airlines could come through this pandemic without a bankruptcy court visit, considering the current debt load and cash burn rates.

When hotels and airline programs boast their membership numbers, you have to keep in mind that 80% to 90% of those members are inactive. It is more useful if all would disclose the number of active members who have had activity in the preceding 12 months.

I feel fatigue building among loyalty program members how valuable their miles and points really are, in terms of difficulty of use. Perhaps appreciation towards issuers providing more flexible “currency” that can be converted to cash or used with several programs is growing.