It’s been a while since we had a Whine Wednesday but today I have a case that’s really outrageous involving Lufthansa and a lost baggage case which they took eight days in total to deliver.

Remember that you can always email us, send a message via Facebook or use Twitter and include photos too. We’ll try to cover a Whine Wednesday case here regularly.

Lost baggage cases are usually very straight forward especially when the bags have already been located and scanned in the system by the time the passenger makes the report but sometimes the situation is made even more complicated by an airlines incompetence and unwillingness to deliver the items promptly.

This case is from a friend of mine who flew American Airlines from the midwest in the U.S. to Germany with the last leg FRA-MUC on Lufthansa.

It’s the regulation that the last carrier that transports the passenger (and baggage) is required to handle the Property Irregularity Report (PIR) so even though the longhaul in this case was on American the duty to handle the matter in it’s entirety falls on Lufthansa’s shoulders.

Here is the timeline of this case:

An automated email arrived at the passengers inbox on March 31st: 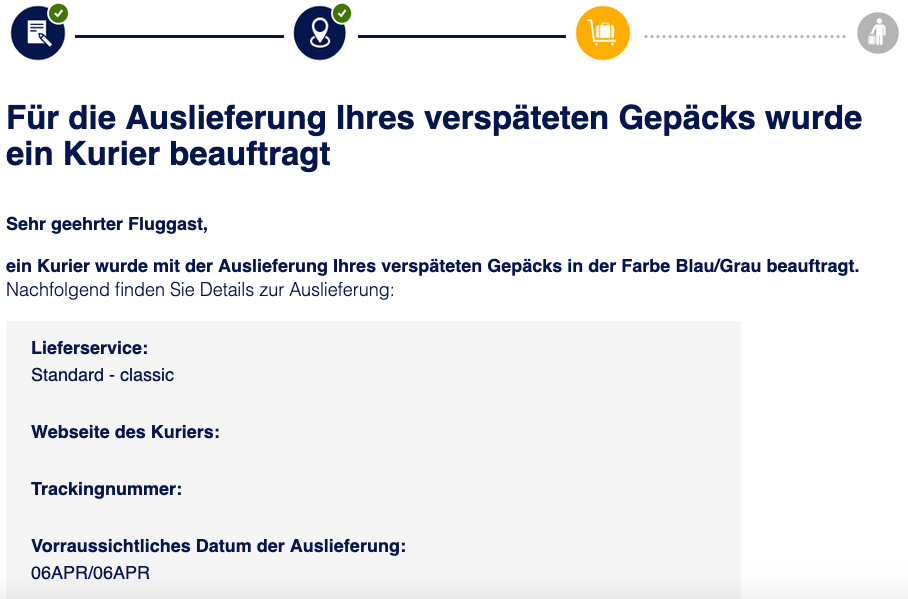 This is how the bags arrived at the passengers home more than a week later:

This is the first time ever I see lost baggage delivered like this, let alone by a regular parcel service.

Here is the timestamp history from GLS:

The timeline shows that the way this was handles is totally ridiculous and unacceptable. Yes there is a long Easter weekend but that doesn’t mean that courier services and taxis aren’t operating.

All it means is that Lufthansa didn’t want to pay for an express delivery, a decision likely based on what kind of cost they can recoup from American Airlines since it was their fault why the bag wasn’t there on time. It even said so in the Worldtracer information:

This isn’t the customers problem though. Based on the Montreal Convention which regulates baggage irregularities the passenger has a basis for a claim when it comes to delayed baggage including any replacement items needed up to the maximum amount of Special Drawing Rights (SDR).

It’s very short sighted by the airline to delay the delivery of the baggage by this long, giving the customer a basis to make substantial compensation claims. A delivery by courier or even Taxi would have costs them what, maybe 150-200 Euro? Now the passenger can claim more than 1,400 EUR if he has the receipts for it.

What kind of service is this? The passenger was in paid Business Class. It’s pretty reflective of the times we live in nowadays, nobody gives a damn anymore.

Lufthansa delivered a passengers lost baggage more than a week after it arrived at their Lost Baggage department at Munich airport simply because they wanted to save costs. Absolutely grotesque! Because of this the customer didn’t have any of his personal belongings and clothing over the Easter weekend. The passenger is entitled to make replacement purchases for this period and submit a reimbursement request to Lufthansa as they are the ones in control of the PIR as the operating carrier of the last segment.

Should Lufthansa refuse to pay for these expenses involved I’d open a claim with the SOP Ombudsman in Germany and have them push the legitimate claim through. Lufthansa would likely recoup the money from American Airlines anyway as they were the offender here, leaving the bags behind at the connection point.

I stayed at a rather horrible Candlewood Suites near LAX Airport this week using points and upon checkout the hotel handed me a receipt...

Not sure if enough courage to venture inside? 😂