Our Compensation Clinic makes a stop at the Sheraton Samui Resort this week where I had a less than satisfactory stay back in April which I escalated to Marriott Customer Care. 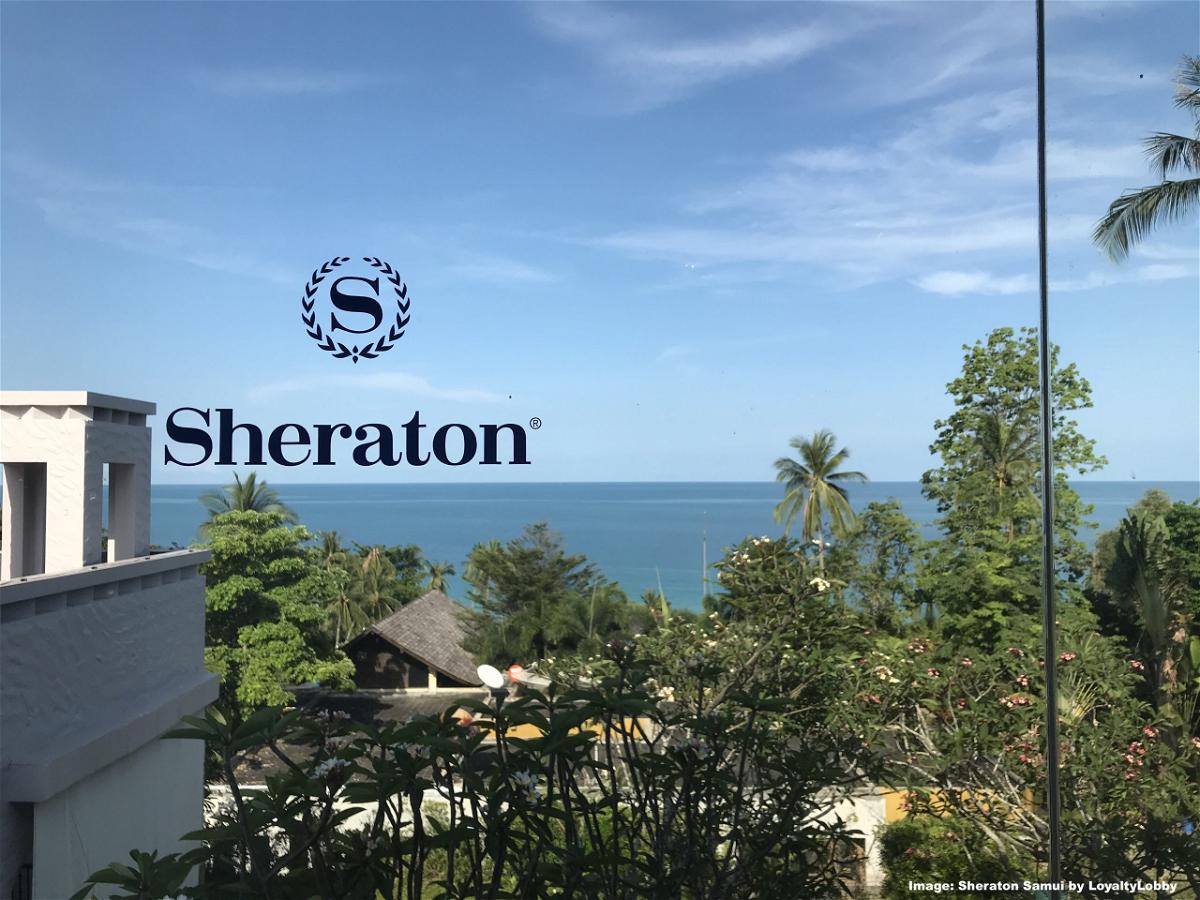 When I pieced together my Koh Samui trip last month I wanted to take advantage of the Marriott promotion for double nights and double points which ended on April 27th so I decided to give the two hotels on Chaweng Beach – Vana Belle and Sheraton – a try.

Both properties had a relatively good package deal they sold at local travel shows that was eligible for points and stay credit so I booked two nights at each of these hotels.

The Sheraton charged 5,750 Baht (~ $92 per night) for two nights including the short transfer from the Airport (I only needed one way since the Vana Belle was right next door) and a dinner at the restaurant.

Arriving at the property was relatively quick aside from the driver not being in the waiting area when the flight arrived as he had to disappear to the toilet for 10 minutes. Great timing.

Despite a pre-arranged hotel transfer the check-in procedure at the hotel took over half an hour and registration forms weren’t prepared either. After 30+ minutes I was asked to sign a blank form, no idea what they were doing all this time and considering the guests is a Bonvoy member (irrespective of status) that’s totally unacceptable.

The property itself consists of an array of old building structures and while visually not in terrible shape you definitely have the feel of it having fallen out of time. I dropped my belongings in the room and went for a walk along the beach to enjoy the last few hours of sunshine. Upon returning I noticed that after a like half an hour the room temperature wouldn’t go down.

The hotel sent technicians to poke around on the A/C after which they claimed it was fixed. Needless to say it wasn’t. 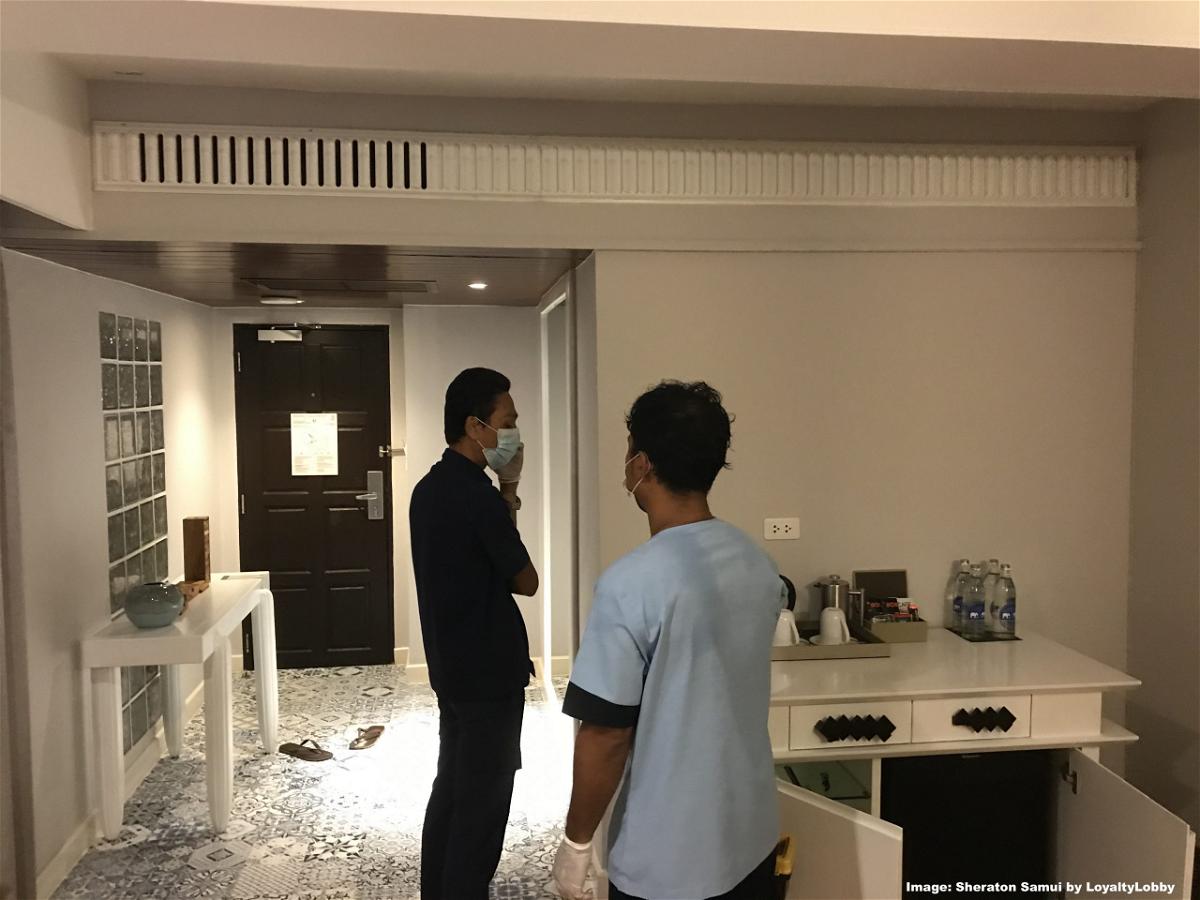 The next day a set of other mechanics noticed the A/C compressor was defective and the coolant leaked out, it would take half a day to fix it.

It wouldn’t get much better, the second night the lowest temperature was ~ 28 degrees. I decided to cancel the third night which I had booked on my free night certificate and instead added another paid night at the Vana Belle.

Another issue was the in room dining. First I ordered Club Sandwich and condiments which were promptly forgotten. The Sandwich itself wasn’t even toasted so I promptly returned it. The alternative – a cheeseburger – arrived very fittingly without any cheese on top. Incredible. Even more incredible that it actually made it’s way to the final bill after calling in to complain about it.

Breakfast on the first morning was actually quite good and plentiful, the second day it was moved to the small poolside restaurant and only a few a la carte items were available. Basically the selection shrank by 80%.

Oh yeah I forgot about the “dinner” that was included in the package. Well… it consisted of a piece of dry sliced chicken breast, gravy, mushy vegetables and potato puree. Less appetizing than hospital food. The dessert saved the meal.

I left at 10am the next morning to go to Vana Belle. Management was not on site at that time either which was a Monday morning, not sure what these guys are doing.

Following this experience I sent an email to Marriott Customer Care and left a low rated review on the after stay survey and public channels.

Eventually someone from the hotel got back to me and agreed to refund one of the two nights to my Bonvoy Amex: 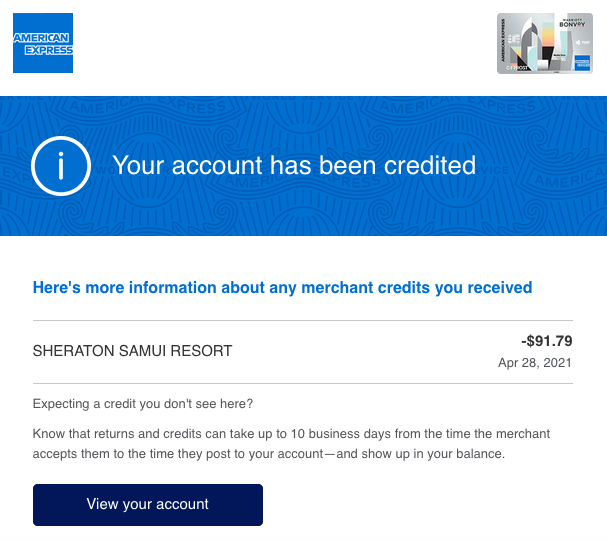 They also asked me to delete my published review, a request I didn’t even respond to and which I forwarded to Marriott’s Area Vice President for South East Asia. He wasn’t impressed by the hotels approach to conduct business either.

The refund of one night is the bare minimum I expected. This was a complete waste of time and $92/night isn’t exactly a cheap price to stay at a badly run hotel when you can spend just a little more and for $150 you have the Vana Belle Luxury Collection or the Ritz Carlton. I rather spend the higher price and have a good experience. Both my stays in the same week at the aforementioned hotels were excellent.

This is a prime example why a brand name isn’t always a guarantee for quality if the property decides not to follow brand standards set by the company that provides the franchise.

Sometimes hotels have left their brand standards so far behind they they think any type of cutback and behavior is acceptable. Sometimes I wonder why some owners don’t just close the resort and invest a little into urgently needed renovations rather than staying open at all cost, trying to run a shoestring operation.

Many hotels are currently selling packages, most of them prepaid, for domestic trips in Thailand and other countries as well. Booking prepaid reservations always comes with a risk when things go wrong and the quality isn’t as expected. In this case I was able to at least cut my losses and cancel the connecting night award free of charge and recoup one night of my expenses.

Airfare of the Day [Business Class] AIR FRANCE/KLM Stockholm to Singapore from 1,320€