On Sunday morning, Ryanair’s flight from Athens to Vilnius was forced by the government of Belarus to divert Minsk just before reaching the Lithuanian airspace.

The Ryanair flight FR4978 was forced to land to detain a journalist Mr. Roman Pratasevic who previously worked for an opposition TV channel and had left the country to live in exile.

Flightradar24 shows the part of the Ryanair flight FR4976: 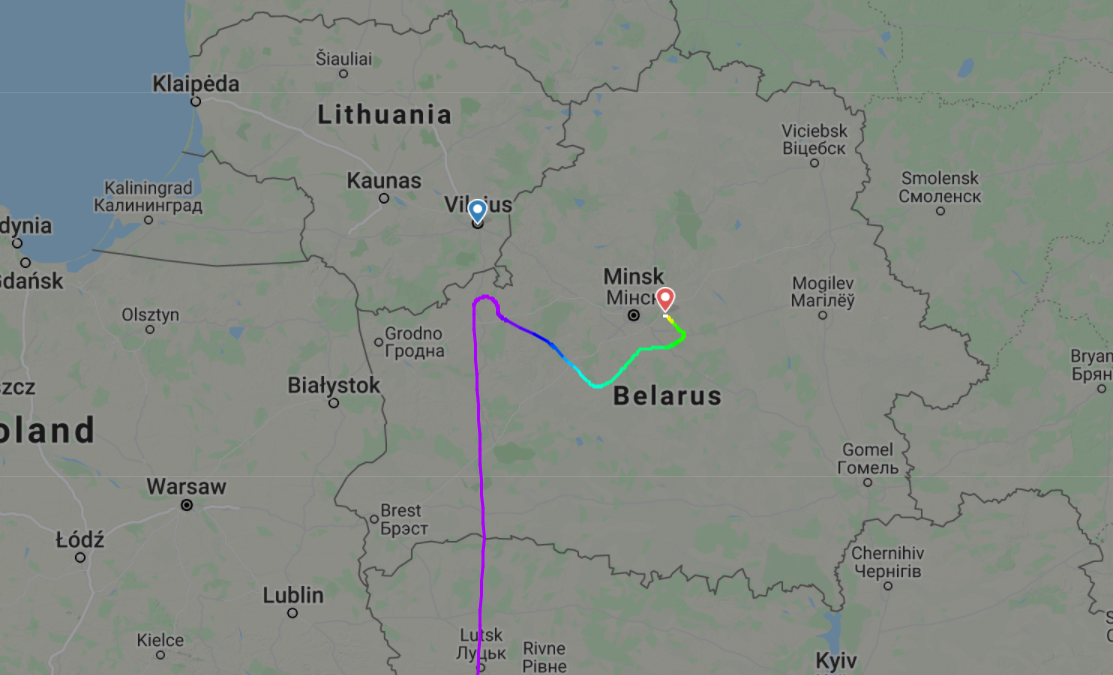 Here’s an excerpt from Euronews:

Pratasevich, who had fled the country for Poland, faces charges that could carry a prison sentence of up to 15 years.

“It is absolutely obvious that this is an operation by the special services to hijack an aircraft in order to detain activist and blogger Raman Pratasevich,” she said in a statement. “Not a single person who flies over Belarus can be sure of his safety.”

The president of Belarus ordered the diversion according to Reuters:

Belarusian President Alexander Lukashenko ordered a Ryanair (RYA.I) flight from Greece to Lithuania to land on Sunday in Minsk, where a Belarusian opposition activist on board was detained, prompting international condemnation.

Lukashenko personally ordered a warplane to escort the Boeing to Minsk, BelTA reported. No explosives were found, it said.

Lithuania and traditional Russian ally Belarus are neighbours and former members of the Soviet Union. Lithuania is now a member of the European Union, Belarus is not.

It is utterly unacceptable to force @Ryanair flight from Athens to Vilnius to land in Minsk.

ALL passengers must be able to continue their travel to Vilnius immediately and their safety ensured.

Any violation of international air transport rules must bear consequences.

We need an immediate explanation by the Government of #Belarus on the diversion of a Ryan Air flight within the EU to Minsk and the alleged detention of a journalist.

The UK is alarmed by reports of the arrest of @nexta_tv journalist Roman Protasevich & circumstances that led to his flight being forced to land in Minsk. We are coordinating with our allies. This outlandish action by Lukashenko will have serious implications.

The forced landing of a commercial plane to detain a journalist is an unprecedented, shocking act. We demand all passengers’ immediate release. Tomorrow’s #EUCO must address the need to step up pressure on Belarus. Enough is enough.

Had an emergency call with 🇮🇪 Minister of European Affairs @ThomasByrneTD to discuss the forced landing of Ryanair plane to arrest journalist Raman Pratasevich in Belarus. I urge 🇬🇷🇱🇹🇮🇪🇵🇱 to initiate @icao @IATA investigation. We must end the impunity of Lukashenka's regime. pic.twitter.com/qjp3gabXQA

The Belarus election in 2020 was set to reelect the president who has been in power ever since 1994. Everything didn’t go to the plan as a strong opposition candidate appeared who had to be suppressed and now lives in exile.

It is unprecedented that a country forces a flight to divert. There was the incident back in 2013 when the plane carrying the president of Bolivia had to land in Austria after several countries denied its airspace access due to the assumption that it was also carrying Edward Snowden.

Dissidents and opposition figures now need to carefully study flight routes to ensure that the aircraft doesn’t overfly a country or territory whose government may want to detain them?

This is not a show of strength but rather a weakness by President Lukashenko.