I never thought the day would come but travelers interested to utilize the infamous Phuket Sandbox can now officially apply for a Certificate of Entry (COE) through their local Thai Embassy’s weblink. 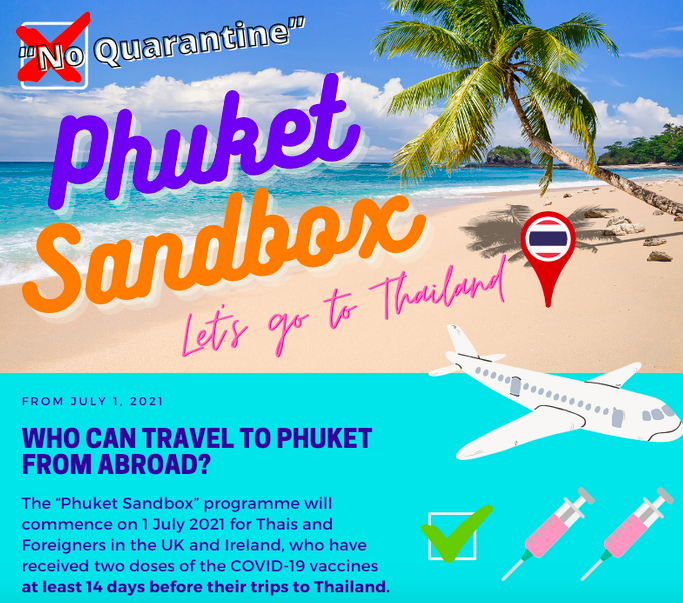 Visitors with a valid certificate will then be able to fly to Phuket on/after July 1, 2021 and may stay at certified hotels either as tourists or Thai residents, but won’t be able to travel to other parts of the country in the first two weeks of stay.

From the looks of it authorities have decided to press ahead with the plan to open Phuket island under the Sandbox program even though parts of the country are entering a new lockdown (restriction) phase today as the healthcare system has reached a tipping point.

The scheme will officially go into effect this week even though the relevant laws still were NOT published in the Royal Gazette yesterday.

Despite this legal requirement not met the Ministry of Foreign Affairs has published a notice on the COE website that applications under the Sandbox scheme can be lodged from 12:00pm Thailand Time on Monday, June 28, 2021 :

The web address is generic but you will pick your residence and which embassy/consulate is responsible for you. Following the application the relevant diplomatic mission will process the COE typically within 48 hours (two business days).

On the First page you select your type of visa to enter Thailand which as a tourist can be either through a visa exempt stamp as part of the Visa Waiver (currently valid for 45 days instead of the previous 30 to compensate for the 15 days isolation) or regular tourist visa to be applied for BEFORE getting your COE through your local Royal Thai Embassy / Consulate. The process and processing time varies by location. 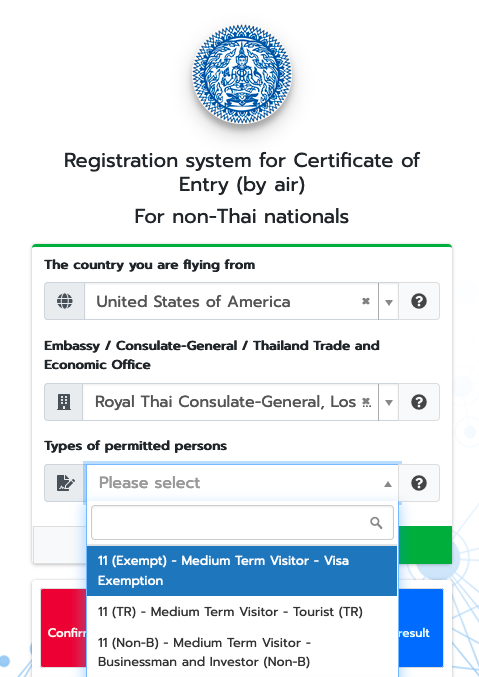 On page two of the application you’d then select that you apply for the COE as part of the Phuket Sandbox Program:

The turnaround time for the application should be roughly two business days, in some cases it’s faster. Keep in mind there are countries that are classified as high risk and which are not eligible for the Sandbox at all.

The conditions for obtaining the Certificate of Entry and being accepted as a traveler for the Sandbox scheme have changed several times but it seems that the requirements are finally firm as outlined on the website of the Royal Thai Embassy in London:

Keep in mind that this is the pamphlet issued by the Embassy in London so the wording might be confusing especially in regards to the required two doses of Covid vaccines.

There is at least one vaccine, the Janssen by J&J which only requires one shot. There were already first reports of people getting rejected due to this, what else could possibly go wrong?

The Embassy in Washington, DC has the information listed as follows:

Eligible travelers (both non-Thais and Thais)

Disappeared from the list of requirements / restrictions and the conversation overall has the matter of electronic tracking bracelets and the disqualification of Thai nationals and long term residents. Apparently the backlash against such punitive measures was enough to hammer some sense into them.

Travelers will still be required to install and run a local tracing application on their phone. Fair enough but I’d recommend to carry a second phone for this purpose that can be wiped clean after your 14 days on the island. I wouldn’t install this application on my primary cellphone but that’s just me.

As far as the hotels are concerned the SHA+ booking confirmation of the property has to be in a special format containing a barcode. You will have to contact the hotel in order to get such a confirmation letter and to organize the transfer from the airport to the hotel in a SHA+ scheme compliant car.

The majority of major hotels in Phuket have already been SHA+ certified and the list includes hotels suitable for all budgets.

Update 29 June: At last the scheme finally became law and was published in the Royal Gazette this evening, literally last second:

🔴BREAKING: Details about the #PhuketSandbox have just been published in the Royal Gazette. It’s now official and Phuket can reopen on 1st July to fully vaccinated international travellers who don’t need to do quarantine #Thailand pic.twitter.com/x8lfEu9rGj

The main rules are:

Now let’s talk about something that has developed into a major concern, the general Covid situation in Thailand as of late June: 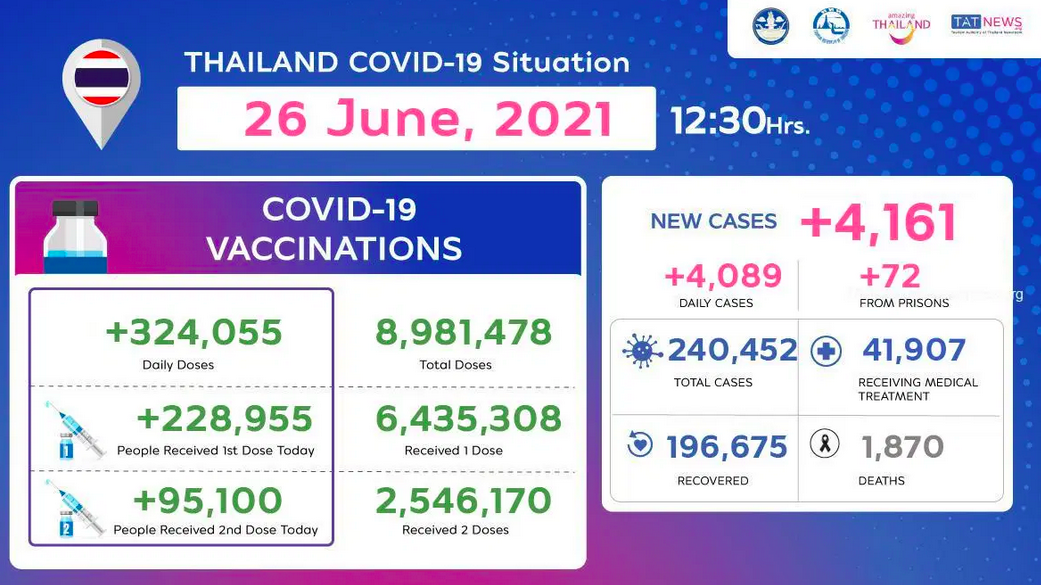 In comparison, this is the current situation in Phuket: 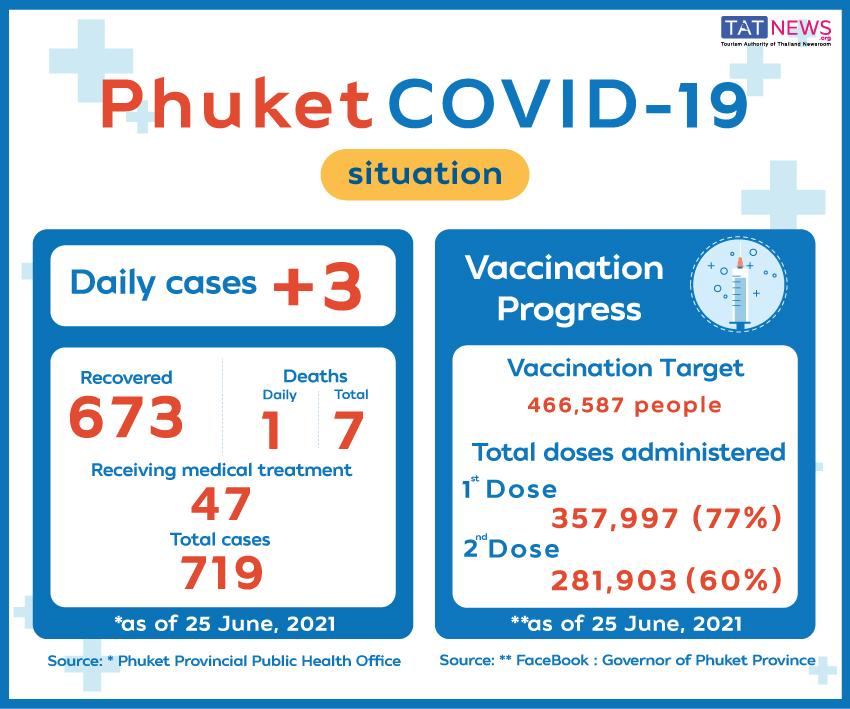 As one can see these cases are steeply on the rise and what’s especially of concern is the generally low availability of vaccines in Thailand. As of now only the government can vaccinate and they refuse to vaccinate any foreigners unless you can present a work permit (with the exception of Phuket, everyone can get a vaccine there). This has caused protests from foreign governments through their embassies but to no avail.

Keep in mind that many of these countries including Australia, China,the European Union and the U.S. have donated funds or vaccine doses to Thailand but they got scrap in return for their citizens. With the exception of China that is, they made their “donation” contingent upon their citizens in Thailand receiving them first. Smart move even though ethically it’s right out of the CCP’s playbook. It boggles my mind why any financial contribution was required in the first place considering the enormous financial resources of the country and the people who run it.

Neverless the point I’m trying to make here is that all this doesn’t exactly qualify Thailand as a holiday destination right now. Many countries such as the UK have placed Thailand on an alert list and upon return one would face restrictions and quarantine measures.

Today Bangkok and other “deep red” coded provinces have entered into a new semi-lockdown phase that includes all restaurants closing for dine-in again after being open for roughly 3 weeks.

New restrictions centred around Bangkok have been announced in a bid to tackle the country’s worst coronavirus outbreak.

The new measures, which will be implemented for 30 days from Monday, include a ban on restaurant dine-ins in Bangkok and five surrounding provinces of Nonthaburi, Pathum Thani, Samut Praka, Samut Sakhon and Nakhon Pathom, according to a document published in the Royal Gazette on Saturday night.

Shopping malls in Bangkok and the five provinces must be closed by 9pm, and parties or celebrations, or activities involving a gathering of more than 20 people will be banned for the same duration, the document said.

It also said construction sites in the six areas will be shut down and workers’ camps will be sealed off to contain clusters. The order followed the emergence of more clusters in construction camps in the capital, which has 575 such sites housing about 81,000 workers.

Following this announcement and “advance warning” there was a reported exodus from these workers camps where people live in appalling conditions (for obvious reasons). Very “smart” strategy on the part of the government, one would think they learned something by now. Of course their approach might be the less people are still at these camps the less mouths they have to feed.

There have also been several public, Covid related suicides including one of a well known singer who jumped down the atrium of a shopping mall and one of a person that jumped off a BTS station adjacent to my Condominium here in Bangkok. Both women were pronounced dead on the scene. As per the Bangkok Post, Hospitals have (allegedly) refused patients with serious Covid infections who then passed away at home while in other cases people with a C-19 positive test are still moved into quarantine camps. This policy is currently under consideration as resources are thinning out and the healthcare system is short of reaching a tipping point.

It shows the level of despair that’s slowly gripping the country without any clear path forward by policymakers other than waiting for locally produced vaccines that are administered in snails pace and through discriminatory mechanisms.

Travelers can now apply for the Phuket Sandbox Certificate of Entry via the weblink and fly to Phuket from July 1st onward. This is a very practical solution for those who are living in Thailand and wish to return after having received their vaccine does abroad. Considering the current situation it’s unlikely any “real tourism” is going to take place there under this scheme for the months to come.

I have serious concerns about where Thailand is heading as far as public health and safety is concerned. I’d think twice, probably thrice if a vacation in the Kingdom under the current circumstances is a good idea. There is very little joy going around right now. Quite to the contrary.

Are you considering to use the Phuket Sandbox? 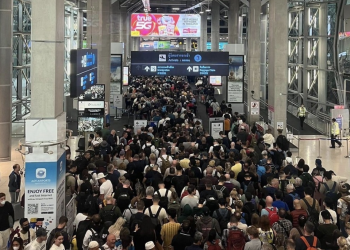 After two years of calm, it seems that travelers arriving at Bangkok Airport are in for some pretty bad arrival...