A LoyaltyLobby reader asked me to write about my Covid-19 test experience and pricing in Madrid after posting a note about it on our Instagram account. 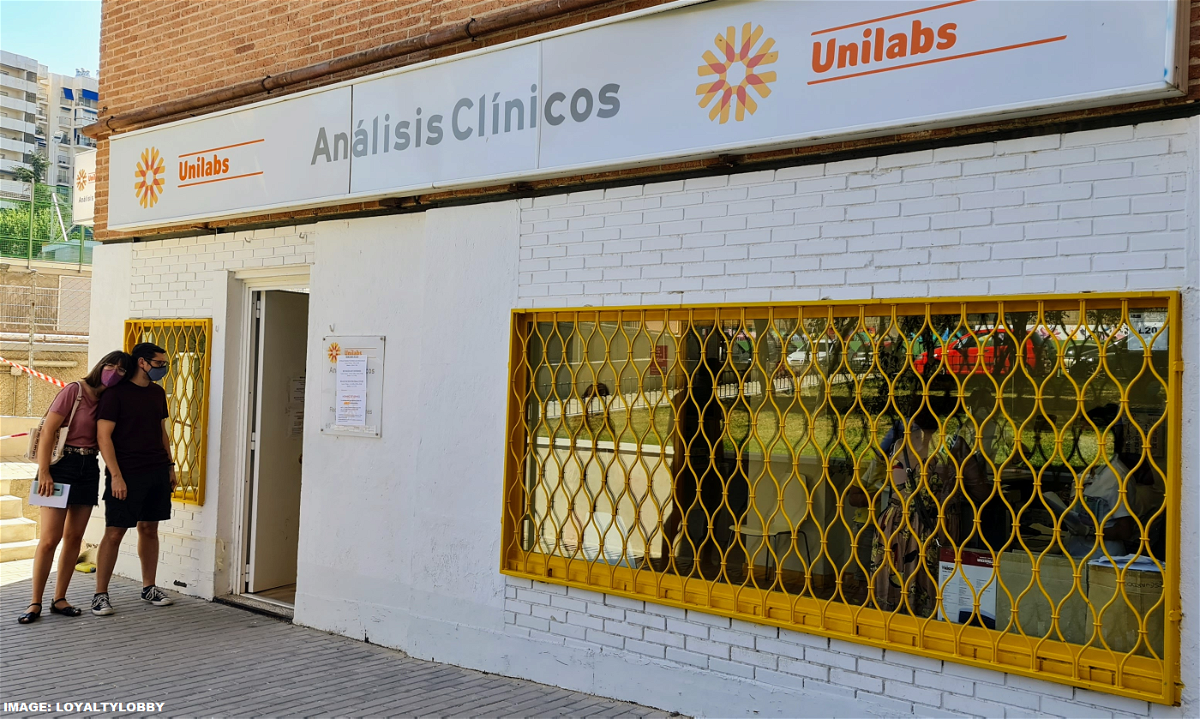 Interestingly, you can a Covid-19 test on every street corner in some countries seven days a week. Getting an acceptable test for travel purposes in some European cities could be an issue during weekends though, as Sundays tend to be a day off.

You can access Iberia’s page for tests here and Melio’s here.

My original plan had been not to stay in Madrid this time but to check out two Spanish cities that I had not been to previously; Cordoba and Granada. However, as I was exhausted after more than a week in Greece and behind with work, I decided to skip the plan and not to take the direct Finnair flight from Malaga to Helsinki (no tests required).

There are currently no direct flights between Madrid and Helsinki. So I had to choose the most convenient option that turned out to be an award ticket using AAdvantage miles via Munich on Iberia and Finnair.

There were options through Heathrow too, but those would have required a PCR-RT test.

There are plenty of requirements for what kind of test is acceptable depending on where you are coming from, but a rapid antigen test would be sufficient for transit in Munich. The test, however, should not be more than 48 hours old at the time of arrival to Germany.

If I am right, the current transit requirements for Germany are:

I was transiting from Madrid to Helsinki on Monday (scheduled arrival time 10:50 AM in Germany) via Munich. I had to ensure that the rapid antigen test would have been done at or after 11 AM on Saturday.

There are plenty of test options available in Madrid, also at the airport. Still, most are only from Monday to Friday, few are available for a couple of hours on Saturday, and even fewer on Sundays.

I tried to book a test slot for Madrid airport for Monday morning, but when I was checking available times on Friday, the next available would have been on Wednesday. Not an option.

I went to Iberia’s website that presented few options with discounts:

It seemed that the Melio was the most reasonable option, as it had four laboratories around Madrid, and most, if not all, had tests available for Saturday. All were walk-ins only. You could not reserve a slot in advance. The price was 30 euros. 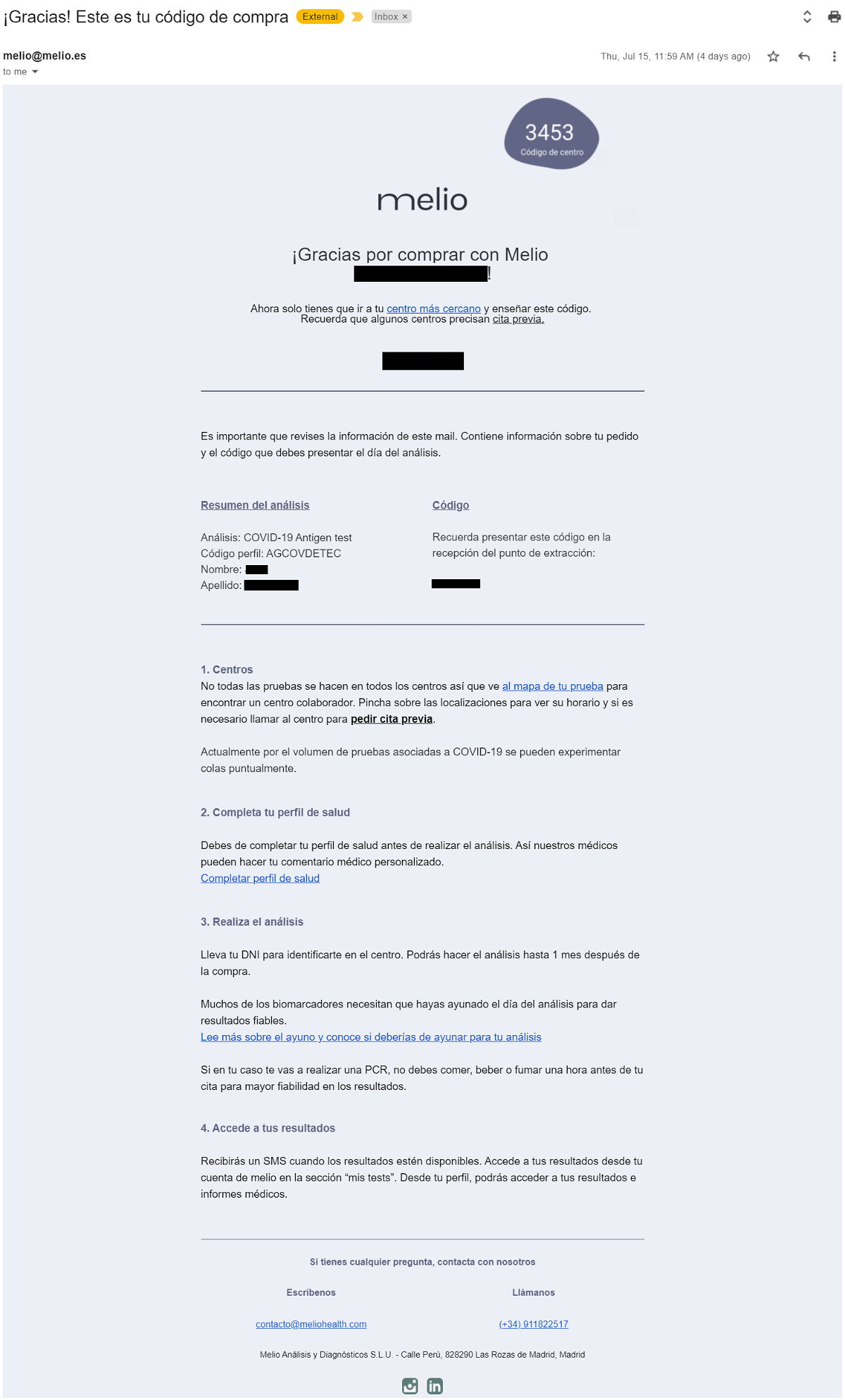 I had initially planned to visit the laboratory in the city center, but it had horrible reviews on Google maps with just two stars. People complained about long waits, not getting results on time, and being denied entry even when entering the line before the center was supposed to close due to an excess number of test-takers. 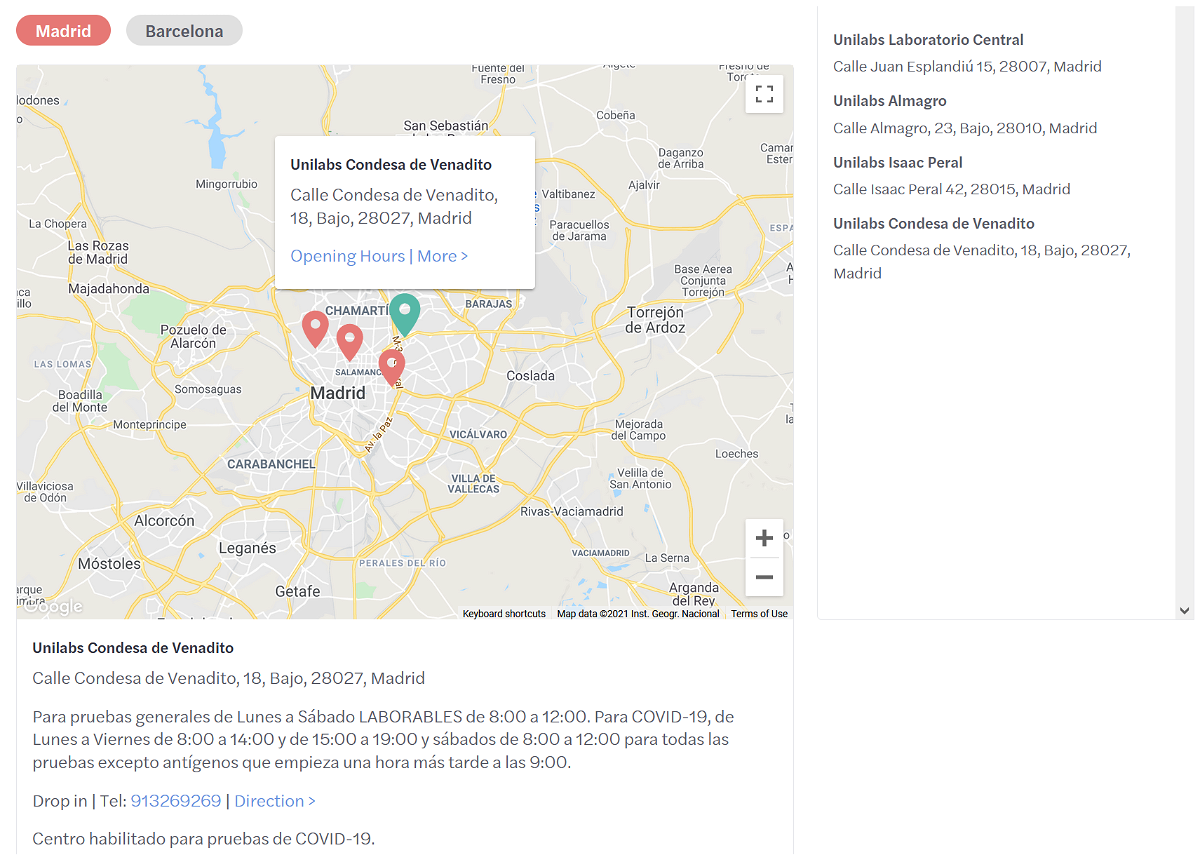 Then, I thought that it was best to choose a lab outside of the city center and just had a nice leisurely walk on Saturday morning.

The center was closing at noon, and I had to get the test done at or after 11 AM to satisfy the Germans.

I entered the line at 10.50 and received a sticker with codes. Others had to fill out a document, but this was not required because I had done the registration online with the payment. 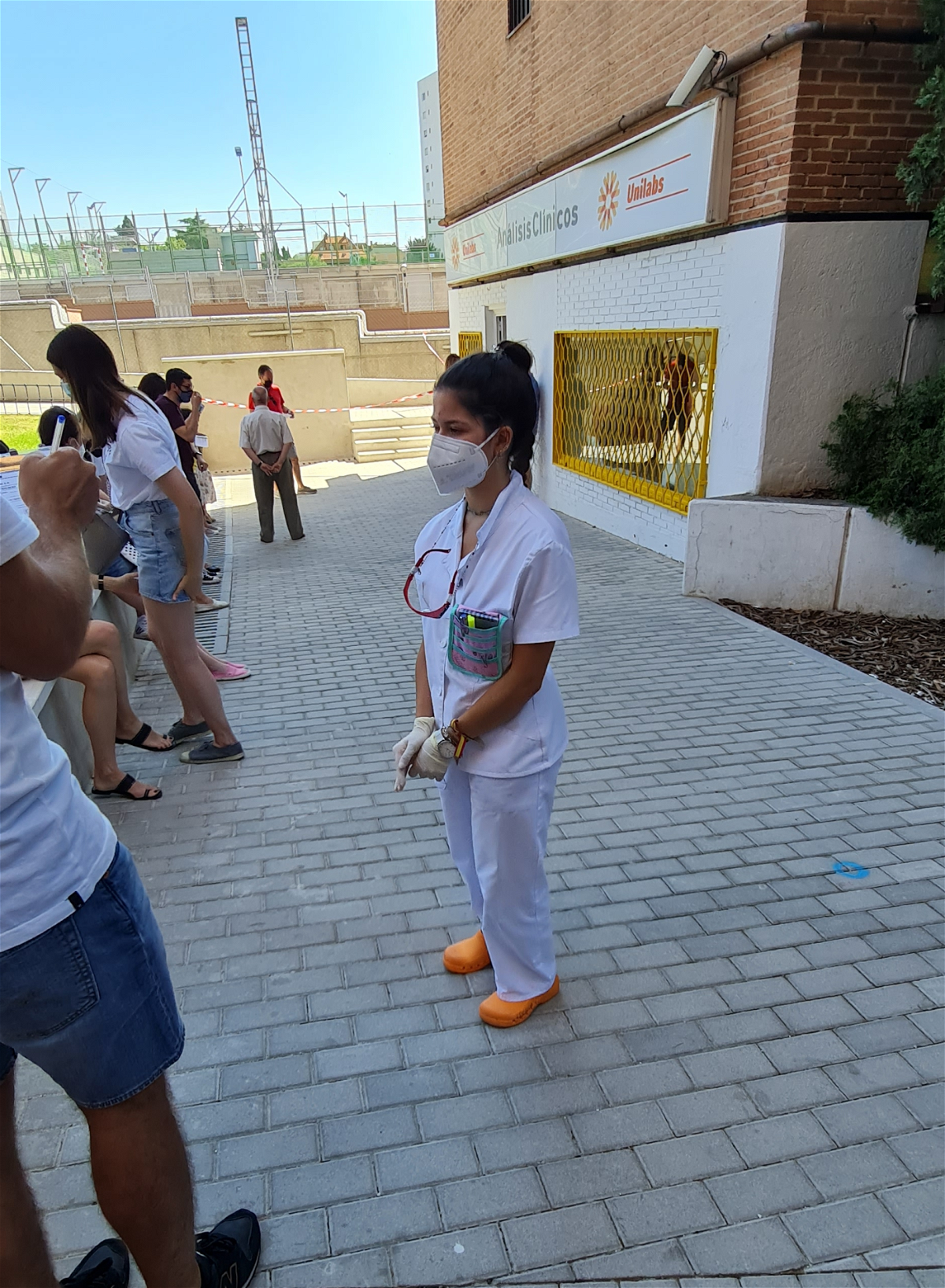 The lady started to turn away those walk-ins that tried to enter the line after 11 AM when the center closed an hour later. They don’t work overtime or process everyone who gets in line by noon.

A Spaniard with whom I chatted while waiting and had preivously taken tests with the same laboratory told me that there was practically no line during thenweekdays. He is usually in and out in 10 to 15 minutes. 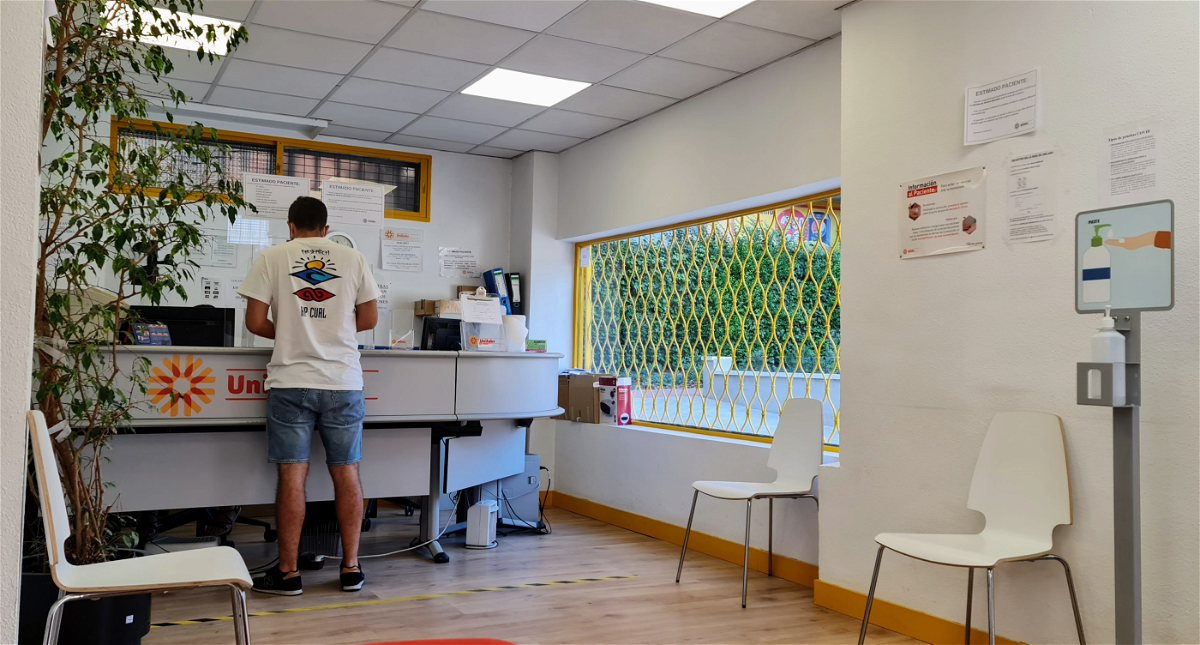 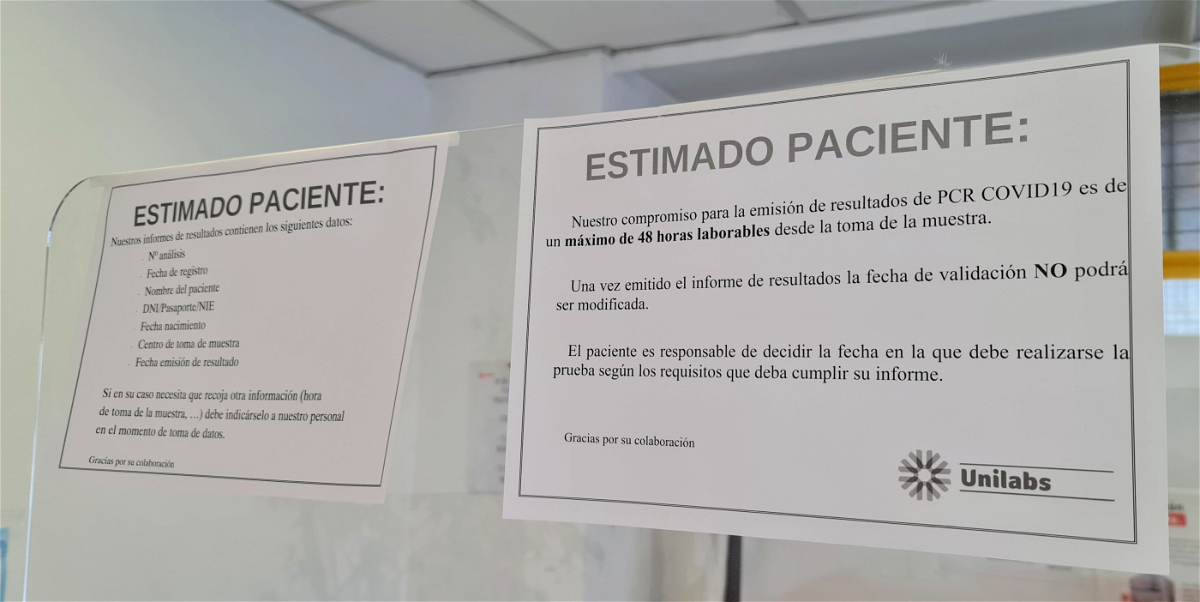 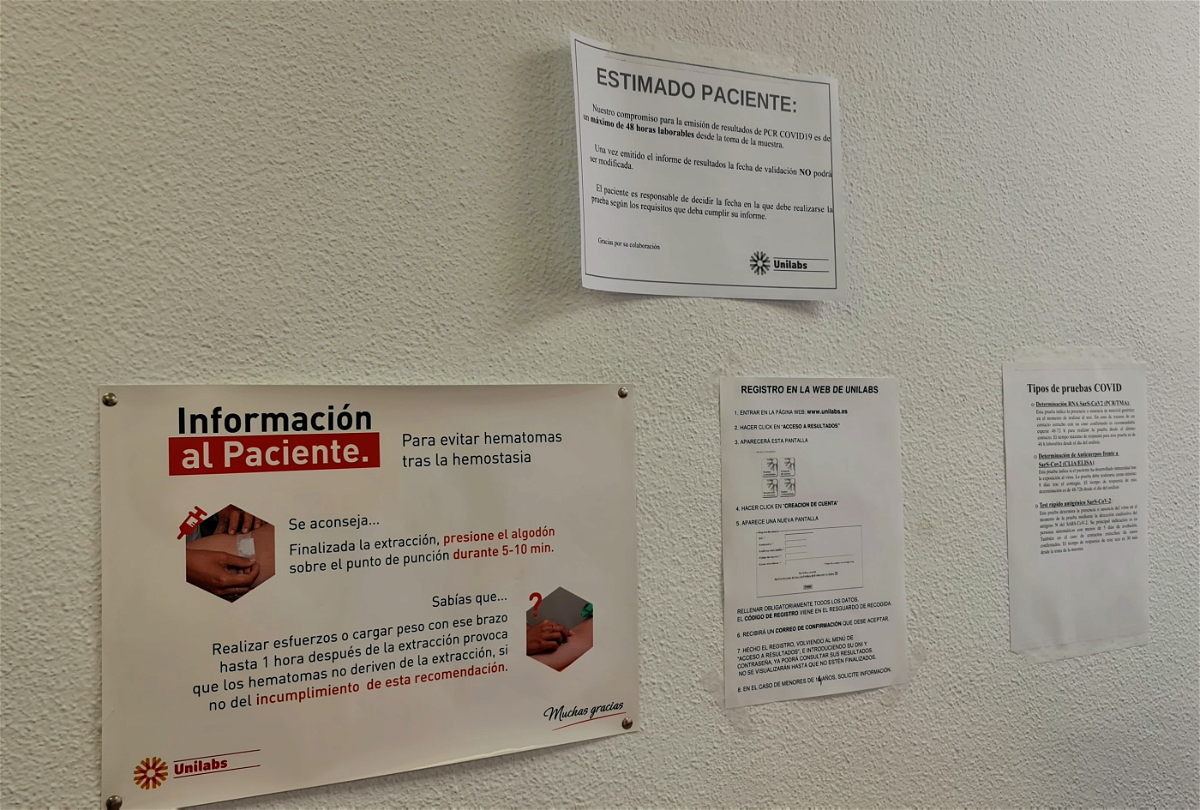 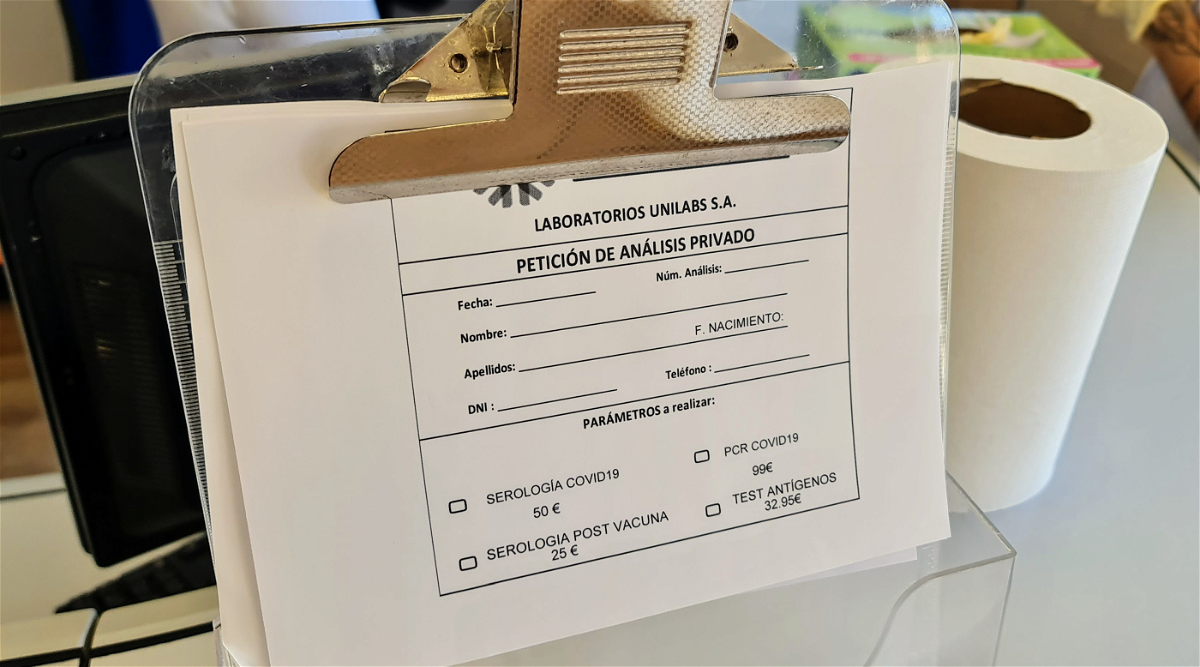 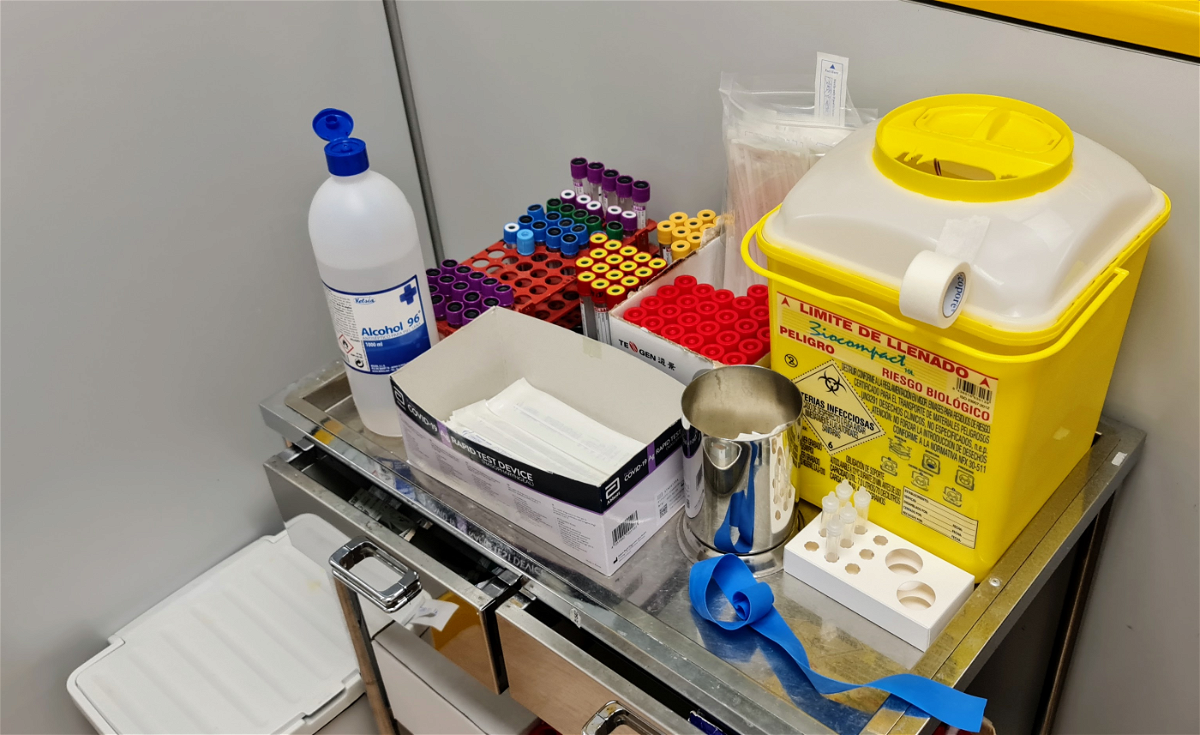 The test process itself was exactly like the 10+ I have gone through previously. They took the sample from both noses, and I received a text 15 minutes later that the test results were ready. 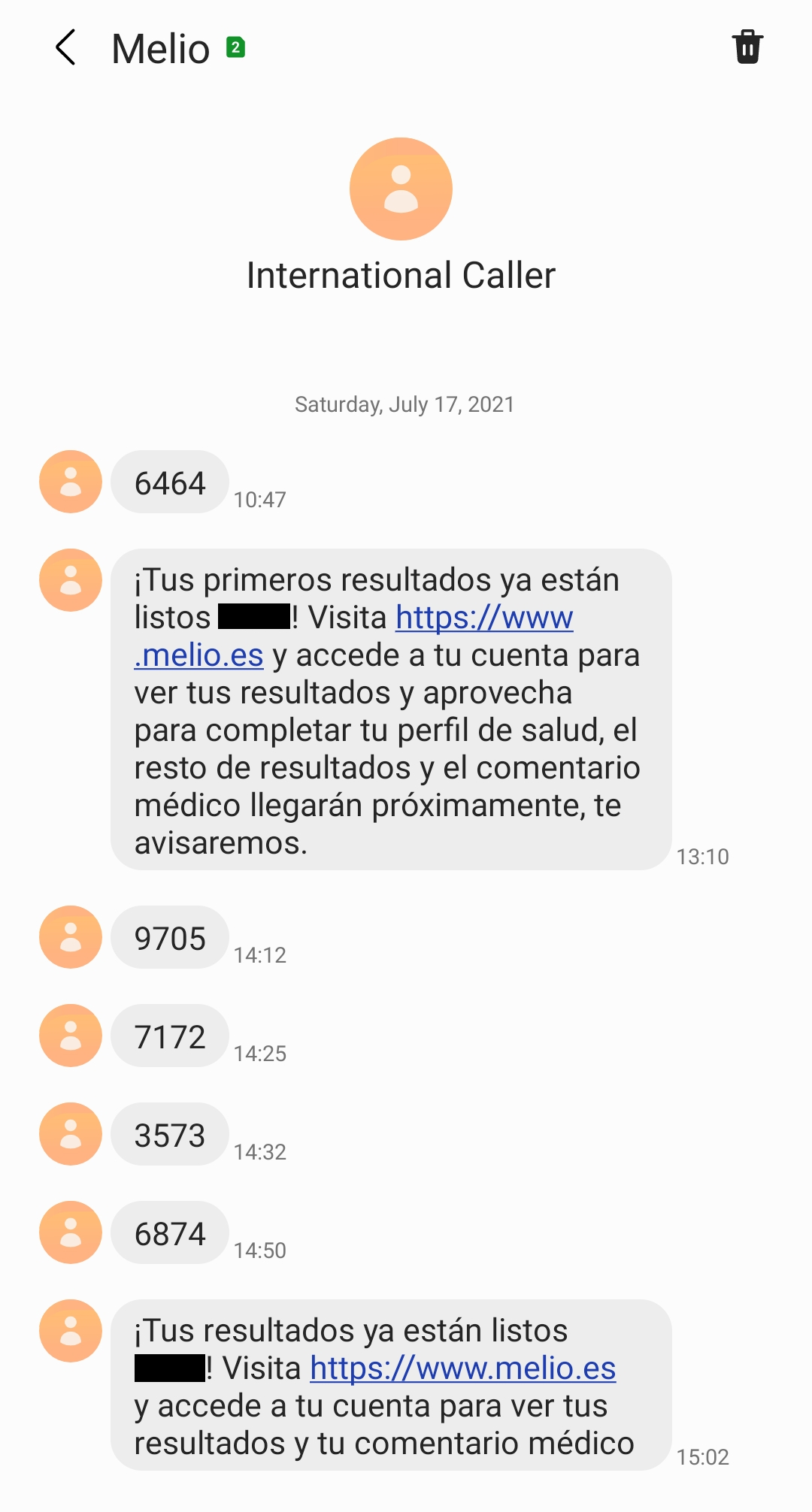 Melio’s web page indicated that the result was negative, but there was no certificate of any type available. 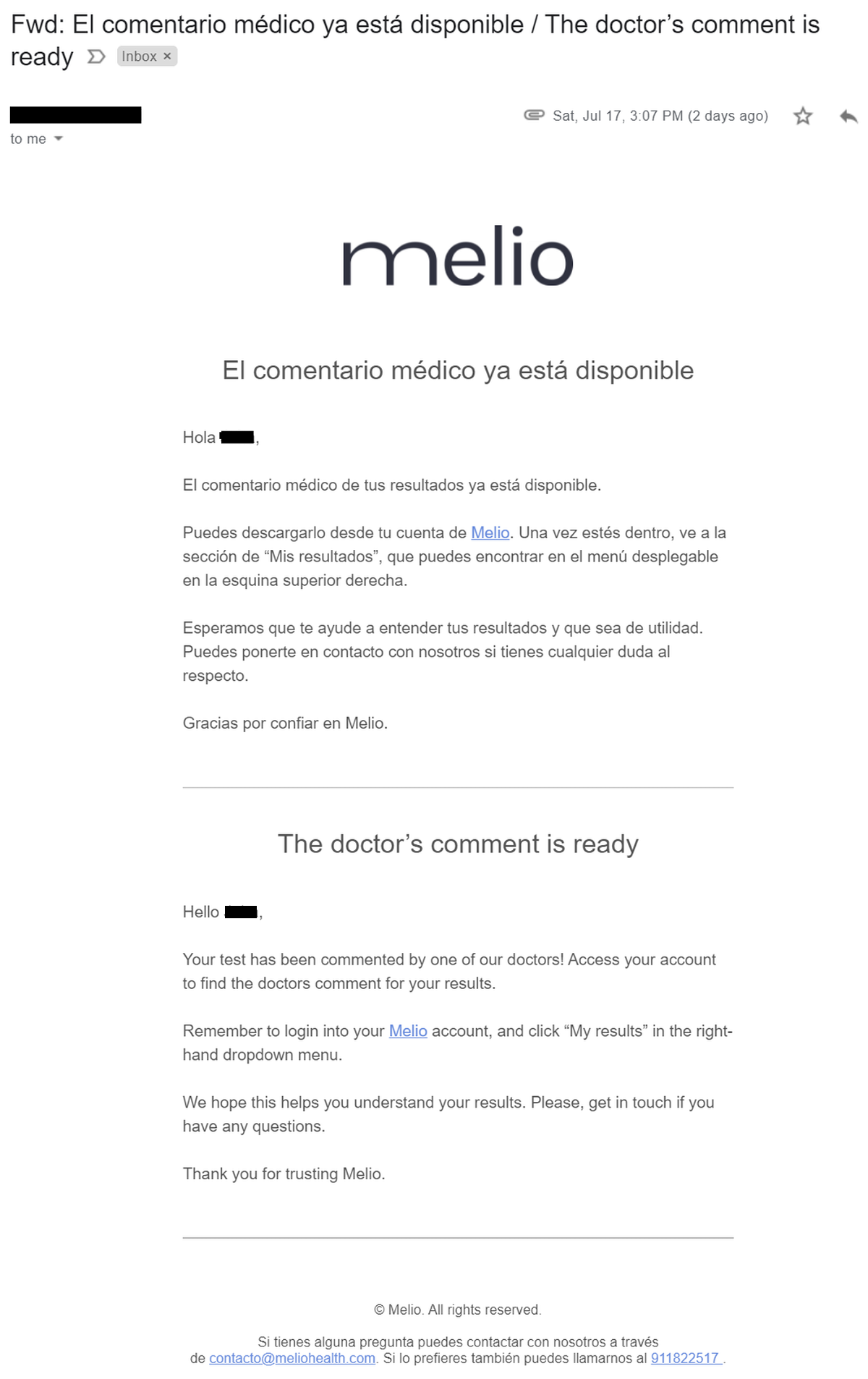 The PDF became available roughly two hours later, and I was not too happy with it. The document didn’t have a time when the specimen was collected, and theoretically, I could not have proved that it was done after 11 AM local time on Saturday. 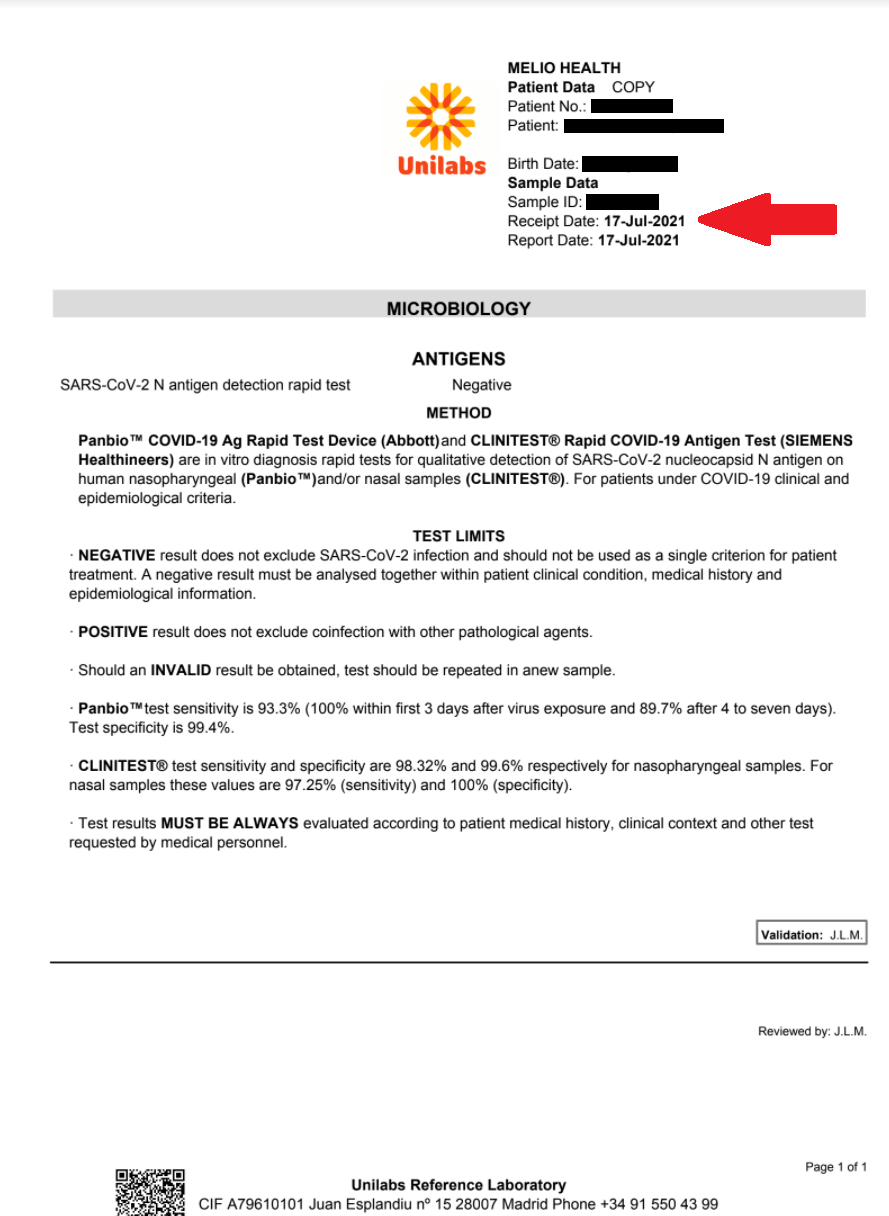 Iberia, however, accepted the document for transportation that morning; the document was checked at the check-in (I had to check in a bag) and again at the gate.

If you know your travel dates and there are no last-minute changes, and you only need the rapid antigen test, my preferred choice probably would be to do it at the airport in Madrid. You, however, need to make the appointment, right now, at least several days in advance.

I was a bit worried after I had made the purchase reading the not so glowing reviews of Melio. My advice would be to use their services during weekdays, and on Saturday use the location further out from the city center.

In an interesting twist, the Spaniard who I chatted with while in line at the testing center told me about his work in Brazil and life in Rio de Janeiro and how he had an asymptomatic Covid-19 infection last year. Mine was not asymptomatic but relatively mild, and in Brazil too!

It seems that I might be able to take a five-week break between Covid-19 tests. The next one should be a PCR-RT test to enter the Phuket Sandbox on September 1, 2021, unless it blows up before. I plan to spend the next five/six weeks around Europe.