We have covered the opening of Thailand’s tourism sector this past July, first in Phuket, where I am currently, and a couple of weeks later Koh Samui, where I’ll fly next week. 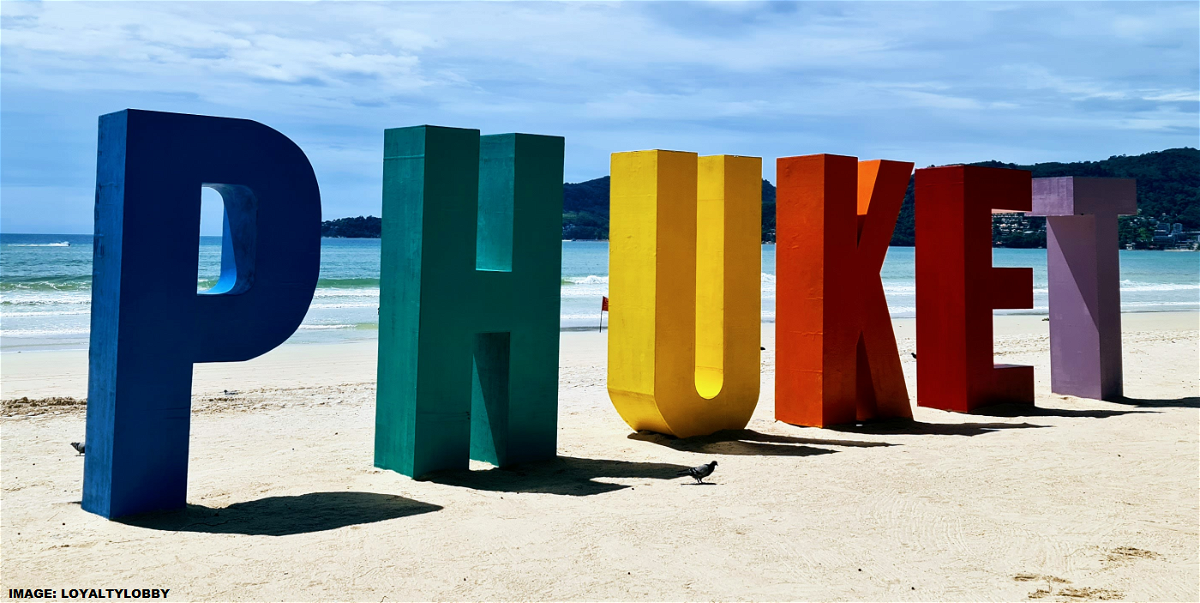 I have covered the Certificate of Entry process that is quite cumbersome due to the number of documents required, and I had a close disaster getting the COE reissued due to changing one of the flights. 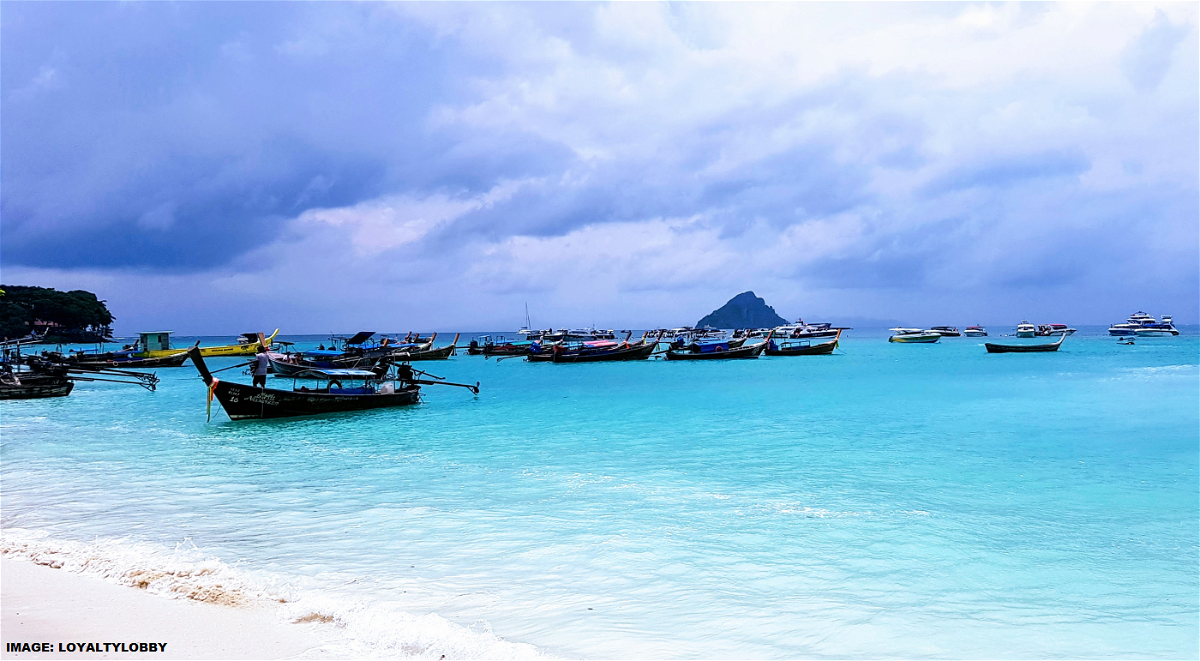 I had ticketed Singapore Airlines premium fare ex-Paris to Phuket and decided to redeem for a one-way flight from Helsinki to Paris on the day of the SQ flight.

If I fly on separate tickets, especially when long-haul flights are involved, I either leave plenty of time for self transit or preferably fly in the night before.

I realized that if the Finnair flight is delayed OR there is a delay, and Finnair refuses to check in a bag through to Phuket, I won’t make the connection. So then I decided that it is probably better to fly into Paris the night before on Air France.

The Certificate of Entry (COE) lists the flights you take from your point of origin to Phuket. There is a note on the document that if there are involuntary changes due to delays and/or cancellations, there is no need to reissue the certificate, but it is valid on other flights.

As my flight change was voluntary and I wanted to make sure that there are no issues with the COE, I decided to contact Thailand’s Embassy in Helsinki to find out if it needs to be reissued.

You cannot amend the documents on the COE website after it has been approved. 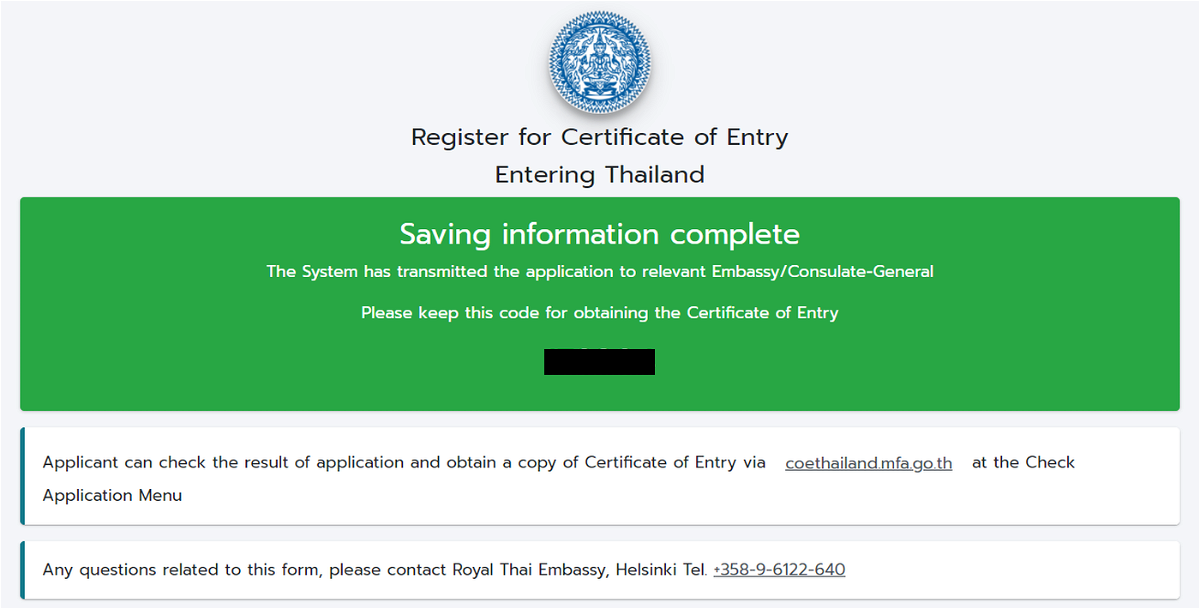 I contacted the Royal Thai Embassy by email, and I was then sent a link to update the documents. 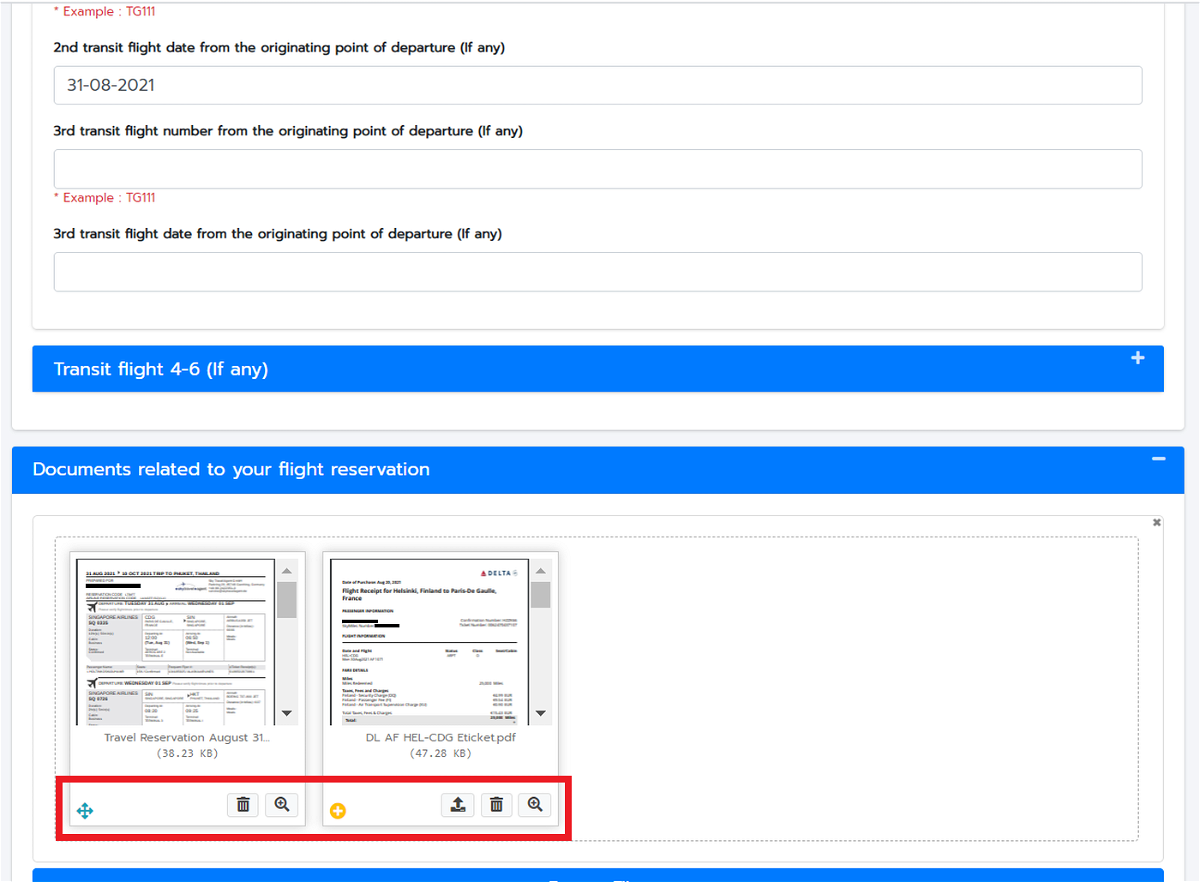 I went through a couple of rejections due to incorrectly attaching and not uploading documents. 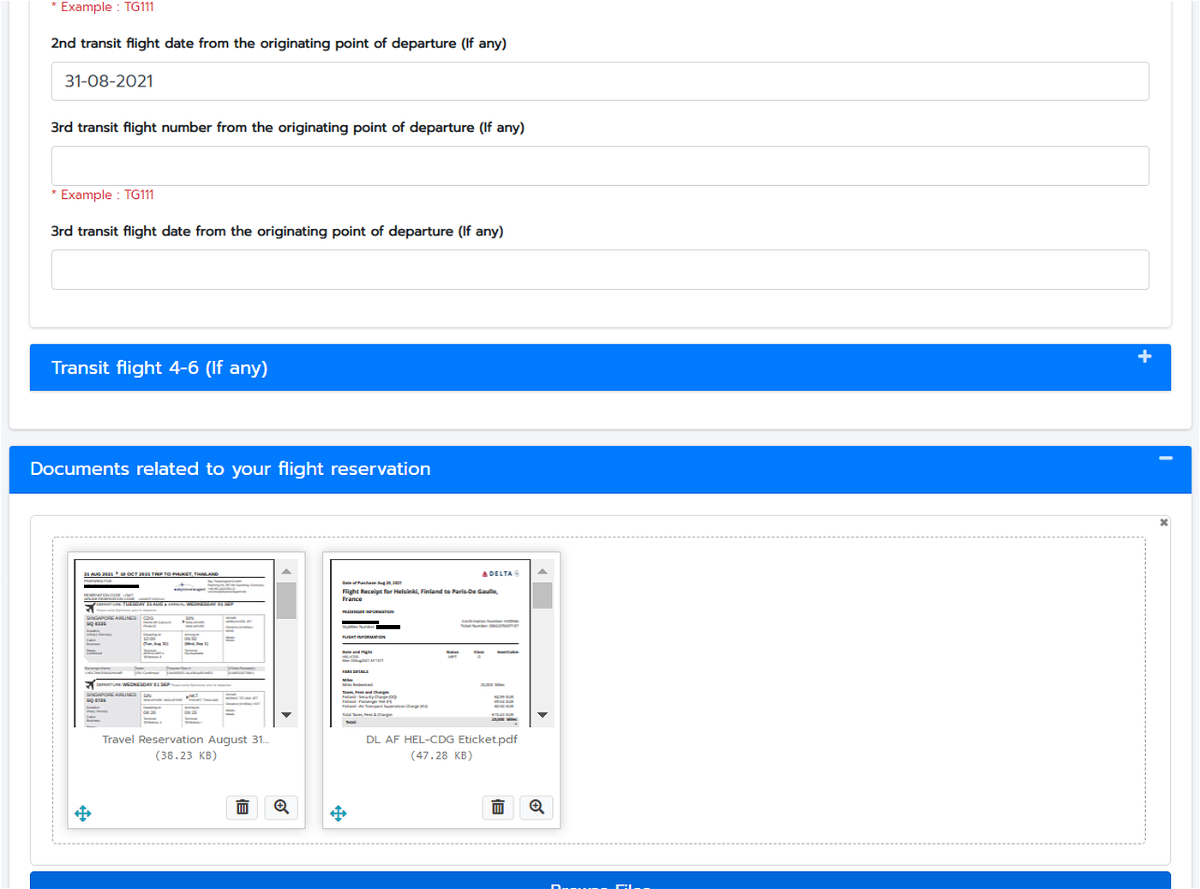 Then I received approval: 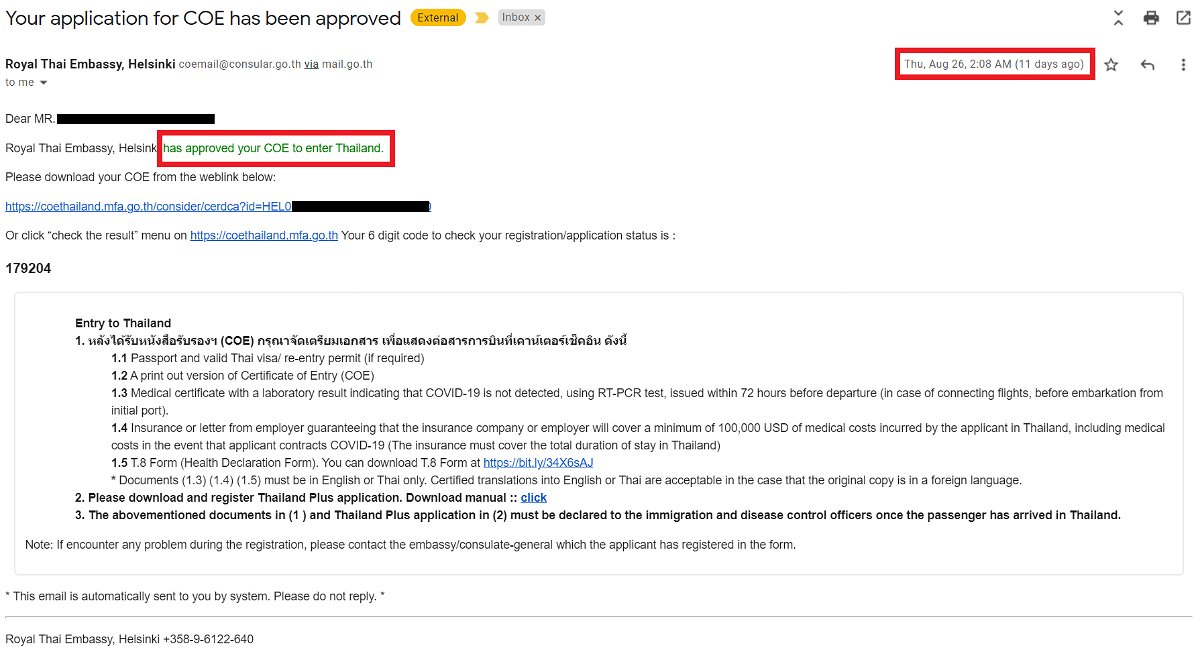 And a rejection 22 minutes later:

All the correct documents were attached to the application, and it was getting closer to the departure date from Helsinki.

I sent an email to the Royal Thai Embassy in Helsinki, who promised to have a consular clean up my application. The approval was then received a few hours later.

The documentation required for the COE is excessive, and the application interface is burdensome and good that I didn’t try to use Safari (it won’t work – made for Chrome). 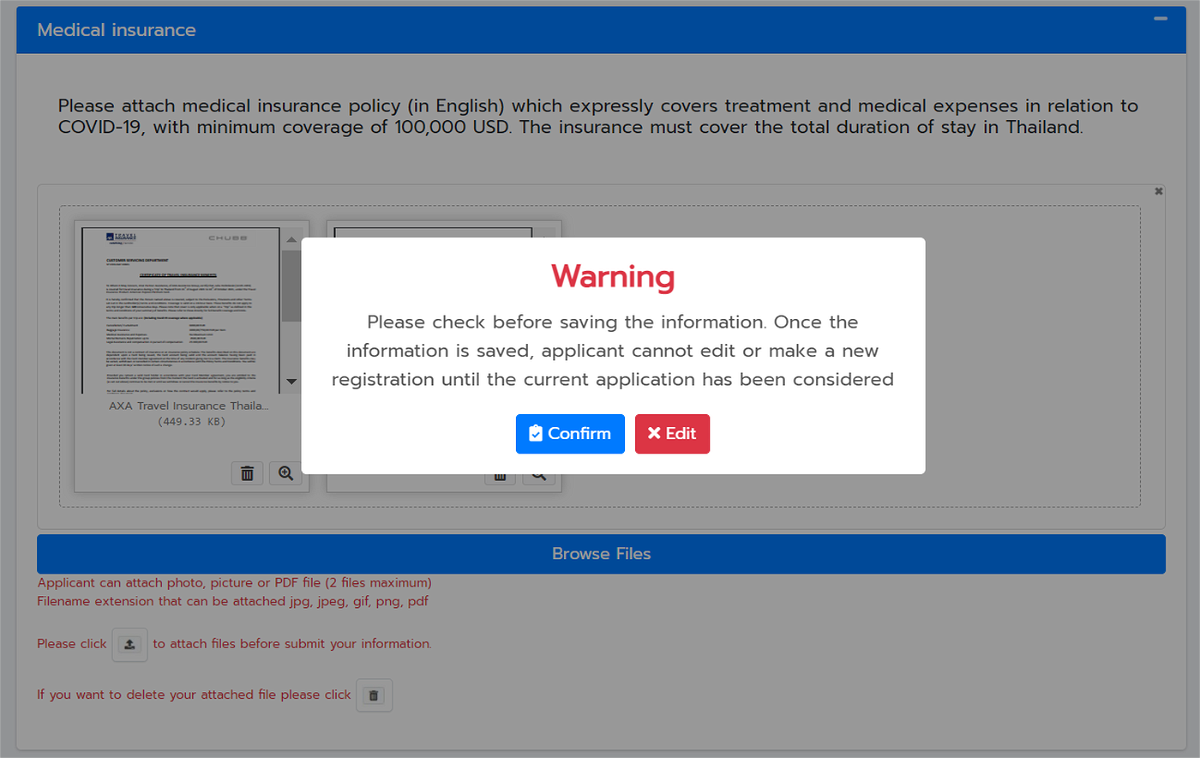 I don’t understand how you can attach a document without uploading it, and the web page doesn’t prompt anything when you proceed with the application. Instead, you get a rejection email a few hours later.

The email replies from the Embassy in Helsinki were prompt, but apparently, they do vary a lot between Thailand’s embassies and consulates in various countries and cities. I am sure that the consuls would rather deal with other issues than these COE applications.