After Thailand has once again postponed their scheduled re-opening of key areas to international tourism arrivals key industry players have hit the government with accusations of gambling away the countries reputation (if there is any left at this point). 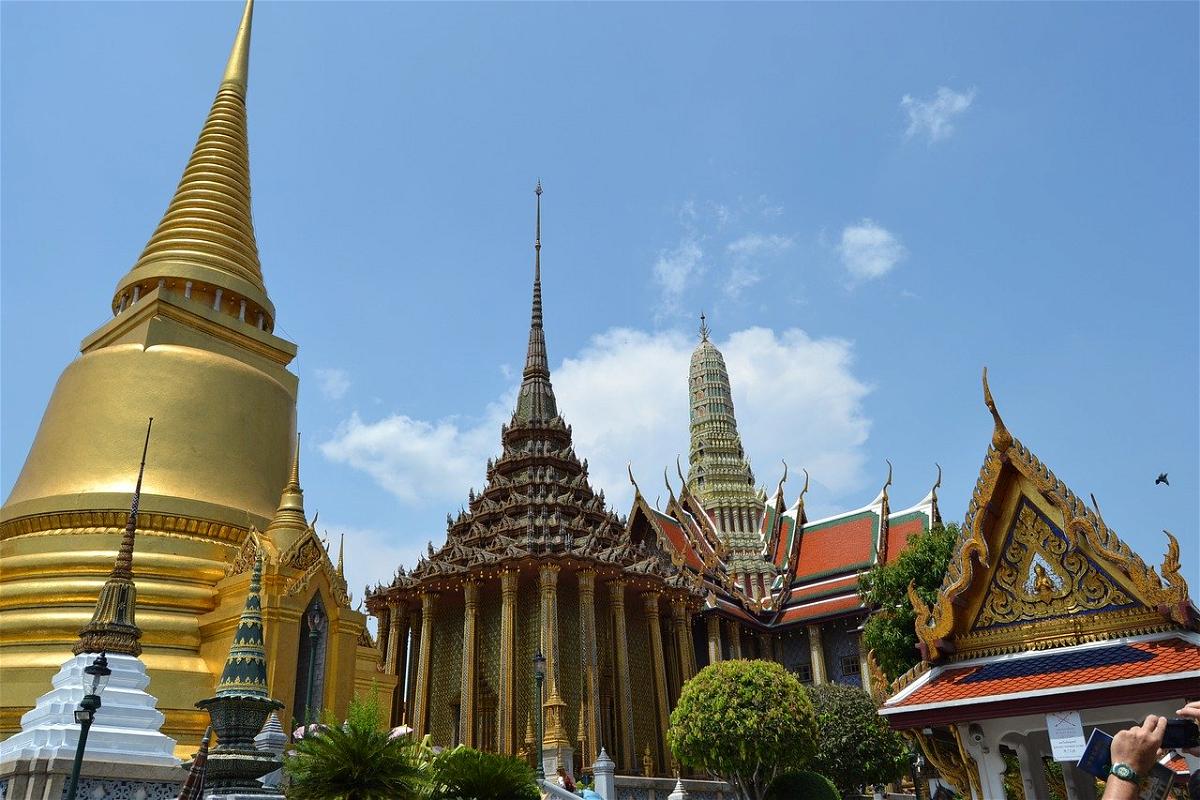 Tour operators, hotel owners and industry investors note that the constant flip flopping by the government has caused overseas travel partners to abandon them and they stopped advertising Thailand as a travel destination due to lack of planning certainty.

While it’s certain that the situation with Covid is fluent the handling of Thailand’s reopening has (with the exception of the Phuket Sanbox) been amateurish at best with too many figures having a hand in the game.

Thailand’s Prime Minister has issued the marching order for a October 1 reopening months ago but as we covered during the past few weeks local politicians and the Covid Situation Council have decided to go against him. October 1st developed into October 15th and then November 1st – with many conditions attached.

This created problems, especially for the travel industry that relies heavily on the upcoming high season and for which overseas marketing is a key element. A lot of business comes through tour operators that still sell a lot of products such as flights, hotels and local activities. Important markets are Europe, Korea, Japan and also India (Thailand just restarted to issue COE’s for travelers originating in India and also added them to the permitted group to use the Phuket Sandbox). China is out as they keep the country tightly wrapped at this points and the foreseeable future which includes incoming and outgoing traffic.

Such partners and especially the customers require one thing for their planning though and that’s reliability and security. You can’t schedule flights, buy large amounts of hotel rooms and from the customers side book your annual leave to a country that is constantly going back on their timeline and then the traveler is standing there with empty hands.

As the Bangkok Post reported today, local industry figures in Thailand are growing impatient with the government and vented after the latest postponement.

Confusion over reopening timelines has spoiled the chance for the tourism industry to rebound during the coming high season as inconsistent policies damage the country’s credibility and international tour operators refrain from planning packages until policies are confirmed.

The reopening plan for five areas — Bangkok, Chiang Mai, Pattaya, Hua Hin and Phetchaburi — faced another setback after the Centre for Covid-19 Situation Administration (CCSA) decided to put off the starting date from Oct 1 to Nov 1.

For Pattaya, Hua Hin and Chiang Mai, this was the third postponement from an initial reopening schedule of mid-September, all attributed to a vaccine shortage.

Tassapon Bijleveld, executive chairman of Asia Aviation, the largest shareholder of Thai AirAsia, said the move affects both the private sector and nation’s tourism image because a reopening timeline of October was already set, with people and companies adjusting their plans. …

“If the government announced earlier the country would be ready for inbound tourists in December or even January, we would have no objection. We would have shifted our focus to the domestic market in the final quarter with full force,” said Mr Tassapon. “The flip-flop worsens a situation which is already somehow at its worst, particularly regarding our financial stability.” …

The postponement mars the country’s reputation as local tourism operators have already settled agreement with agents overseas that have the potential to bring in tour groups from Russia and India, said Mr Thanet.

“Nobody will listen to us again. They will wait for an official announcement, which may occur in November at the earliest, too late to capture high-season traffic as international flights often need 2-3 months notice for air traffic permission,” he said.

“It also takes that long to promote those packages.”

Tourism Authority of Thailand governor Yuthasak Supasorn said the decision by CCSA to reduce the quarantine period to seven days for inoculated visitors will help spur tourism demand upon reopening.

However, tourists still have to take costly RT-PCR tests during their time here as the Public Health Ministry does not want to use antigen test kits for the second and third tests.

One thing is certain – to talk about anything with the term Quarantine is a non starter to begin with as far as tourism is concerned. Nobody will come to Thailand (or any country) to get locked up for a week, let alone two weeks. The associated tests at an expense of 8000 Baht ($240) for three PCR tests is another disturbing factor.

The Phuket Sandbox has proven to be a convenient gateway for many including myself. You can book hotels at market rates, utilize your loyalty benefits and can roam free as long as your PCR tests come back negative. This means you can do your two weeks in Phuket for ~25,000-30,000 Baht rather than spending double that in Bangkok for a decent hotel and be locked up the entire time. Plus hotels generally don’t upgrade ASQ customers so if you want a suite for the two weeks you have to book one.

Phuket Sandbox results have been lackluster at best. We’re now at the end of September and the model has attracted 36,330 people as of today which means ~ 12,000 per month since July: 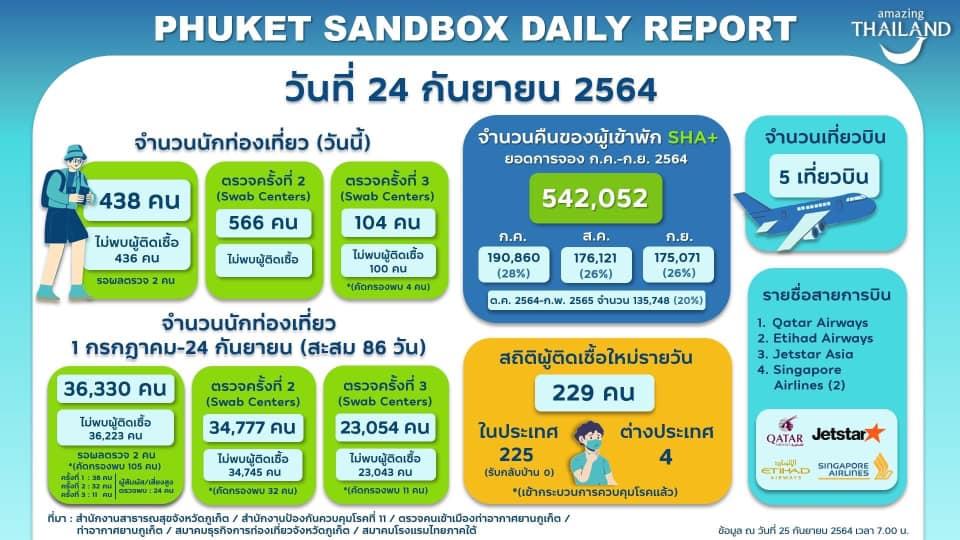 The good thing about it is that this helped gather experience about how to handle a reopening and what contingency plans should be in place in case visitors test positive. All nice and well but this is still not recognizing the fact that vaccinated overseas visitors with a negative test result upon arrival are more likely in danger of getting Covid in Thailand rather than bringing a case in.

Government agencies playing hot potato with this matter and nobody wants to take responsibility. In my opinion the PM’s demands for opening on October 1st provided a unique opportunity for lower officials to wave it through and let the situation go it’s way. Instead we’re now back to square one which means scrap.

Commercial travel partners and aren’t going to jump on the train again after being continuously disappointed by the flip flopping and Tourism Authority (TAT) marketing campaigns that appear to come out of la-la-land. The statement of the TAT spokesperson that “a quarantine period to seven days for inoculated visitors will help spur tourism demand upon reopening” shows how out of touch with reality these people have become.

Other countries such as Indonesia and Malaysia face similar problems. Dates to reopen Bali to the outside world have been set and then canned several times for example. All commercial activity in Bali is now solely domestic with ridiculously low rates, even less so than in Thailand.

There is still no date in sight when Thailand will reopen most of it’s ports of entry to international visitors with a sensible system that allows the restart of common commercial tourism activities.

The countries economy relies heavily on utilizing their tourism high season for revenue. This would be the third high season that’s decimated by the impact of Covid-19 and subsequent government policies of not opening the country to visitors (with the exception of the Phuket and Samui pilot projects). You can only feel sorry for those whose livelihood depends on the government getting this right. They are standing in line at food kitchens while the government big shots ride their Porsche through Bangkok.

Right now nobody will book their winter holidays in Thailand and instead select one of the many destinations worldwide that’s back open for business and has been for quite some time. Be it Southern Europe, the Maldives, Seychelles, Hawaii etc. By the time Thailand finally gets it’s act together it will be too late and the loss of the high season business 2021-2022 is pretty much a certainty at this point.