What Happens To The Cosmopolitan’s Affiliation With Marriott & Bonvoy?

Blackstone, an alternative investment company, and MGM announced on Monday that the latter would acquire the operations of the Cosmopolitan hotel in Las Vegas that is currently affiliated with Marriott under the Autograph Collection flag. 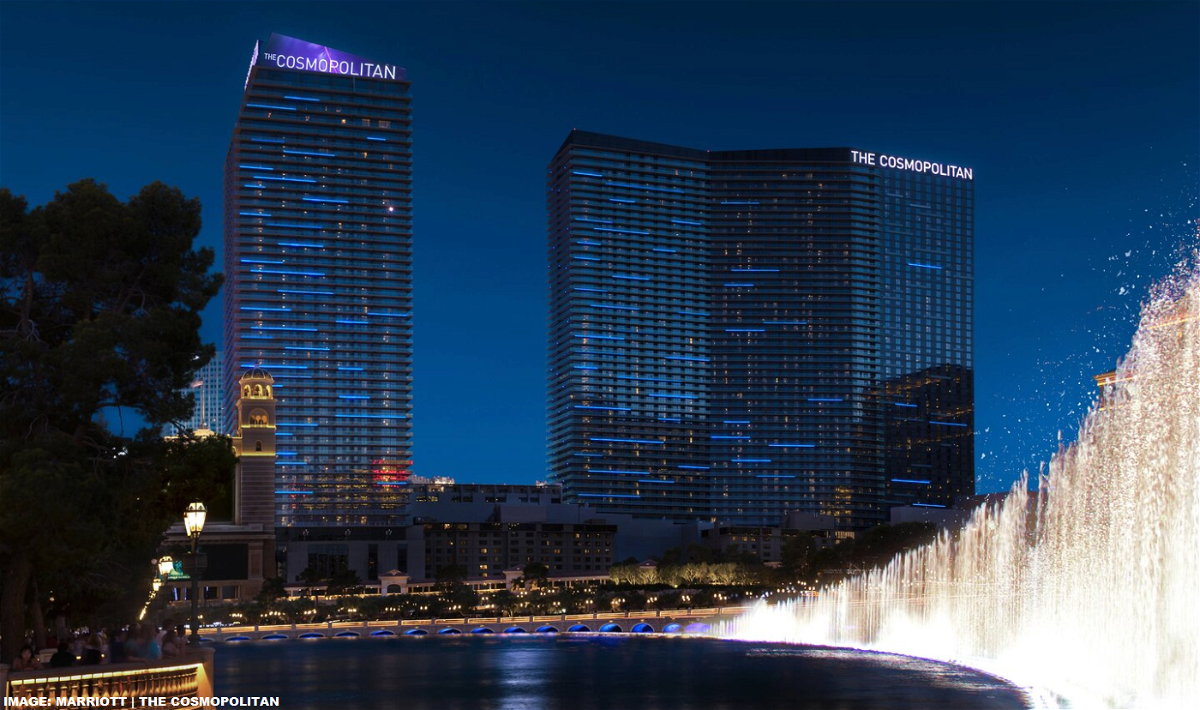 Many Marriott Bonvoy members consider this their to-go hotel in Las Vegas to earn and redeem their points. However, they now wonder if and when the affiliation with the Autograph Collection end.

You can access Marriott’s page for the Cosmopolitan here. 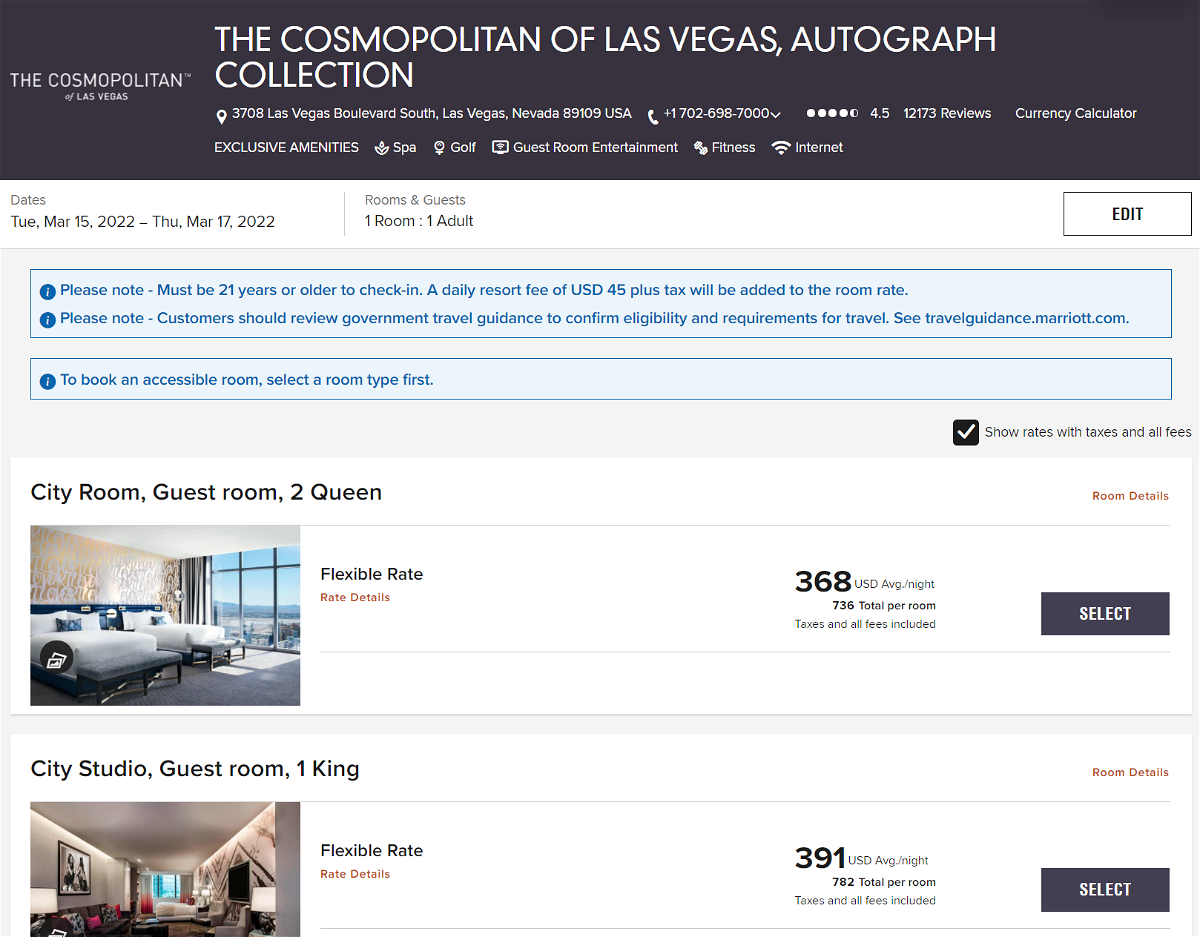 Marriott Bonvoy has the following carve out for stays at the Cosmopolitan: 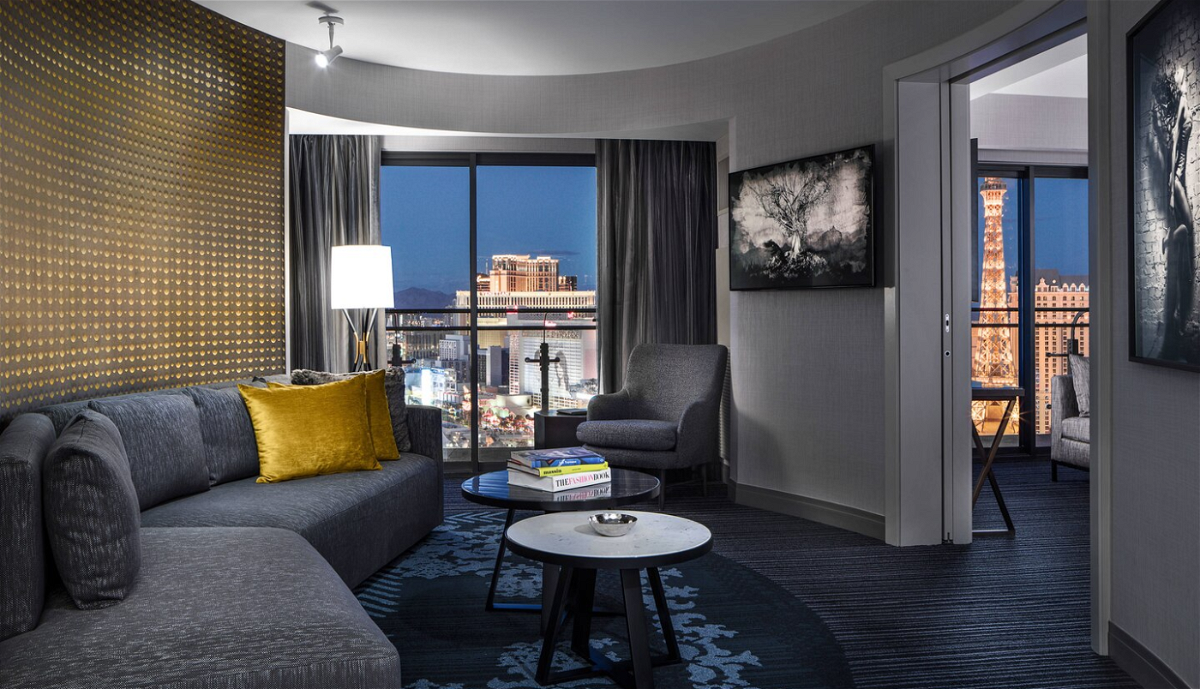 xiii. Autograph Collection® Hotels – all locations except for:

A. The Cosmopolitan of Las Vegas participates in the Loyalty Program as follows:

(1) The only charges that qualify for Points are the following: Room rate, room service food and beverage, in-room movies, phone calls and in-room minibar purchases. Points cannot be earned on any other purchases at hotel outlets or for hotel services.

(2) Points may be redeemed for all Qualifying Stays (defined in Section 2.1.d.) at The Cosmopolitan of Las Vegas.

(3) Limited benefits are provided as described in Section 1.3, Section 3.7, Section 4, except for the breakfast option associated with the Elite Welcome Gift benefit which is not available, and Section 6.4.

Here’s the announcement from MGM: 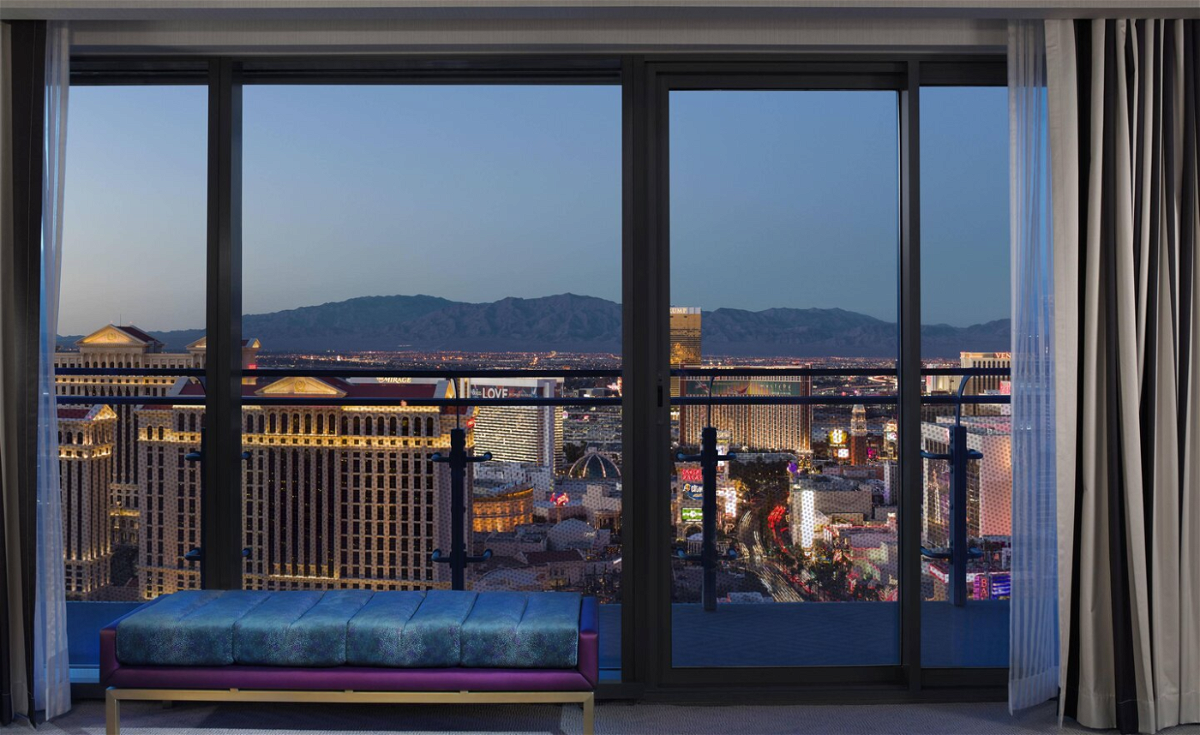 LAS VEGAS, Sept. 27, 2021 /PRNewswire/ — MGM Resorts International (the “Company” or “MGM Resorts”) (NYSE: MGM) today announced that the Company has entered into a definitive agreement with Blackstone to acquire the operations of The Cosmopolitan of Las Vegas (the “property” or “The Cosmopolitan”) for cash consideration of $1.625 billion, subject to customary working capital adjustments

Following the close of the transaction, MGM Resorts will enter into a 30-year lease agreement, with three 10-year renewal options, with a partnership among Stonepeak Partners, Cherng Family Trust and Blackstone Real Estate Income Trust, Inc. (“BREIT”), which will acquire The Cosmopolitan’s real estate assets. MGM Resorts will pay an initial annual rent of $200 million, escalating annually at 2% for the first 15 years and the greater of 2% or the CPI increase (capped at 3%) thereafter.

“We are proud to add The Cosmopolitan, a luxury resort and casino on the Las Vegas Strip, to our portfolio,” said MGM Resorts CEO & President Bill Hornbuckle. “The Cosmopolitan brand is recognized around the world for its unique customer base and high-quality product and experiences, making it an ideal fit with our portfolio and furthering our vision to be the world’s premier gaming entertainment company. We look forward to welcoming The Cosmopolitan’s guests and employees to the MGM Resorts family.”

“With over $500 million of capital invested to upgrade the property since 2014, The Cosmopolitan offers an incredible opportunity to expand our customer base and will provide greater depth of choices for our guests in Las Vegas,” said MGM Resorts CFO Jonathan Halkyard. “We believe that we can leverage MGM Resorts’ expertise, operating platform and other highly achievable synergies to continue providing best-in-class service, while driving growth for the property.” 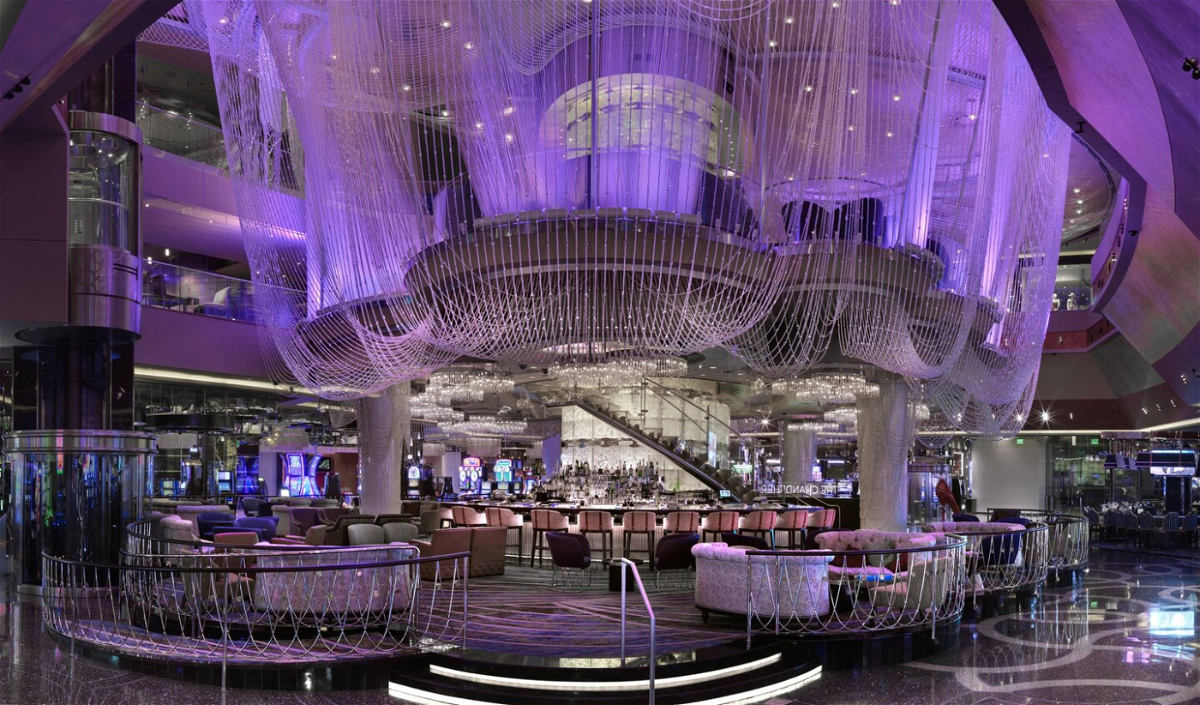 The Cosmopolitan, a world-class contemporary luxury resort and casino, opened in December of 2010 and underwent significant capital improvements since Blackstone acquired the property in 2014. The property features:

The transaction is expected to close in the first half of 2022, subject to regulatory approvals and other customary closing conditions.

1 Calculated as EBITDA before rent, impairment loss and pre-opening expenses, and after corporate expenses.

Blackstone Announces Sale of The Cosmopolitan of Las Vegas 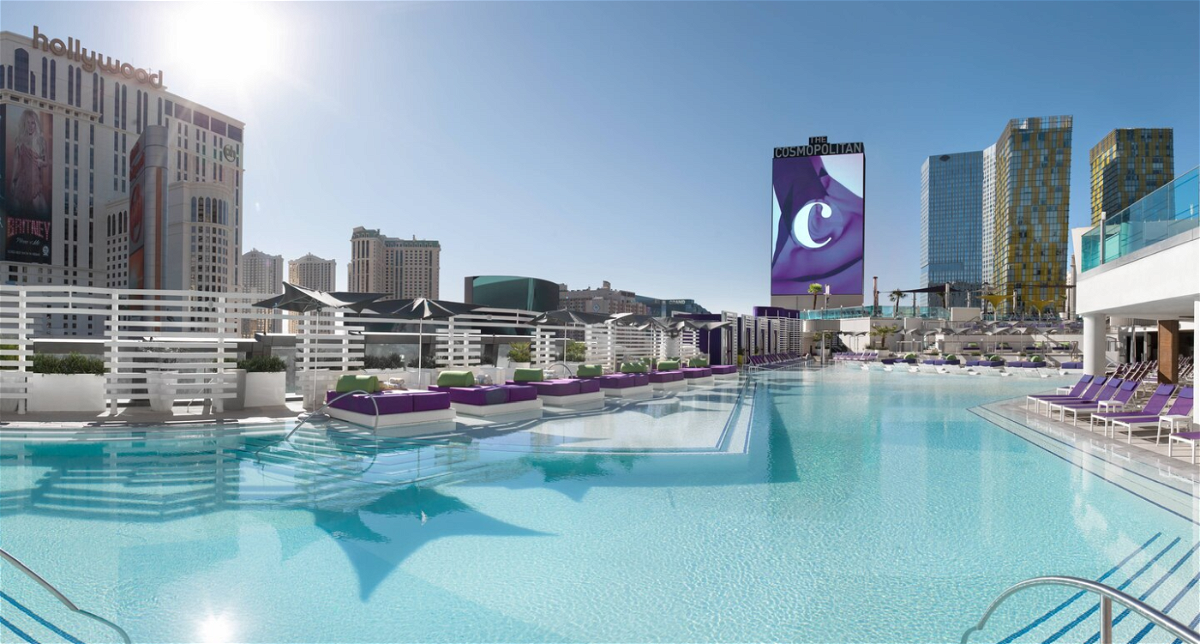 Since acquiring The Cosmopolitan in 2014, Blackstone, alongside a best-in-class management team, transformed the resort into the leading destination on the Las Vegas Strip. Blackstone implemented significant operational changes and invested over $500 million into the property to renovate nearly 3,000 guest rooms, build 67 new rooms and suites, enhance the food and beverage offerings and dramatically improve the gaming amenities and common areas. Blackstone also reached agreements with unions at the property and secured approximately 3,000 stable jobs for professionals that will continue to serve guests of the hotel. As a result of these enhancements, The Cosmopolitan’s recent performance has been stronger than ever, exceeding pre-COVID levels in the second quarter of 2021.

Tyler Henritze, Head of Acquisitions Americas for Blackstone Real Estate, said: “This transaction underscores Blackstone’s ability to acquire and transform large, complex assets. As owners of The Cosmopolitan, we invested strategic capital and brought our expertise and experience in the lodging space to create the most dynamic destination on the Las Vegas Strip. The management team and employees at The Cosmopolitan, led by CEO Bill McBeath, flawlessly executed an ambitious business plan, including navigating a challenging period for the entire industry, to position the property for such a high level of success.” 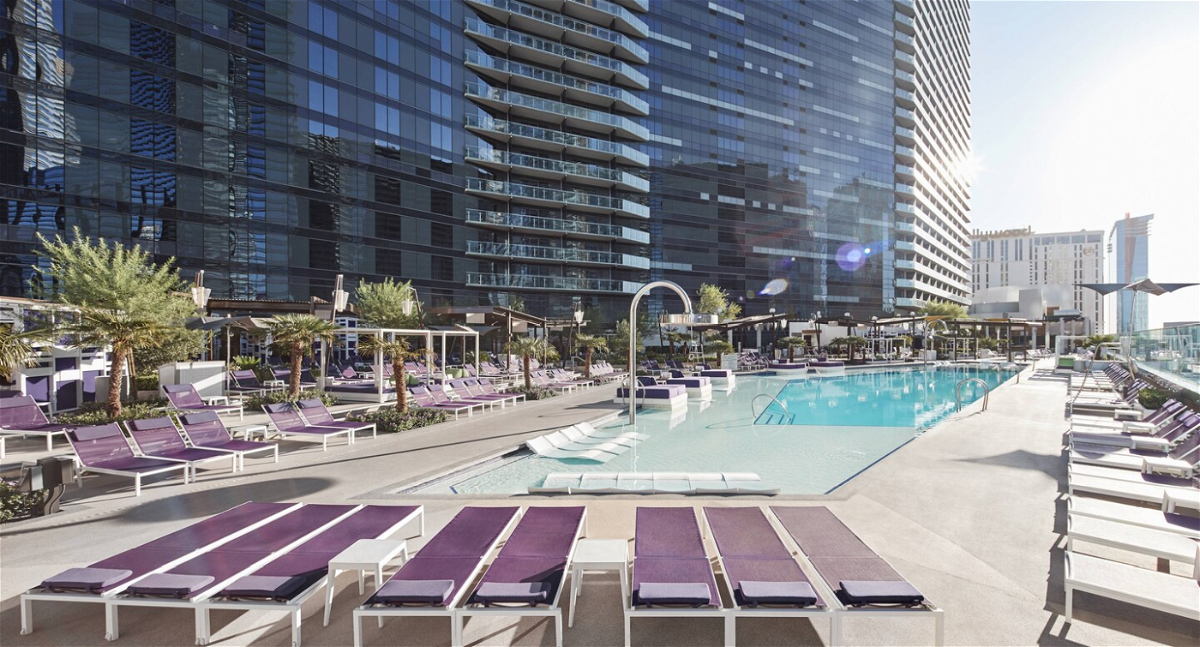 BREP conducted a thorough process, throughout which it considered a broad range of potential options for The Cosmopolitan and determined that separating the asset’s operations from the underlying real estate would result in an optimal outcome.

Under the agreement, MGM Resorts International intends to acquire the operations of The Cosmopolitan and sign a long-term net lease with a partnership between Cherng Family Trust, Stonepeak Partners and Blackstone Real Estate Income Trust, Inc. (“BREIT”), which will acquire The Cosmopolitan’s real estate assets.

“Stonepeak, in partnership with the Cherng Family Trust, believes this transaction represents a fantastic opportunity to invest in the underlying real estate of The Cosmopolitan of Las Vegas, a solid asset with an irreplaceable location, durable cash flows and the potential for additional upside,” said Phill Solomond, Head of Real Estate at Stonepeak.

The transaction is expected to close in early 2022, subject to regulatory approvals and other customary closing conditions.

We don’t usually cover every hotel sale that may result in a reflag, but this is a pretty remarkable hotel in Las Vegas.

My point is that if the deal goes through in “early 2022,” there will likely be changes few months down the road, including greater than fifty-fifty probability that the Cosmopolitan will drop its affiliation with Marriott’s Autograph Collection.